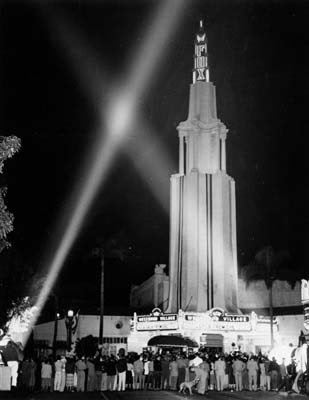 Variety recently reported that two single-screeen (i.e., old) Westwood movie houses in danger of closing were being rescued by Regency Theatres: the Village Theatre and the Bruin. According to this article, the Village Theater opened in 1931, and the Bruin in 1937 (actually, 1938). And Mann (the former owner) still has bios on these theaters at its website.

This picture (from the Herald-Examiner collection of the Los Angeles Library) shows the Village--then the Fox Westwood Village--in 1951, during a premier. There's still a lot of premieres held here, like for Julie & Julia or Planet 51.

Here's an oddity--a report on the condition of the the Village and Bruin filed in 1978, when the Times, "assisted by writer Paul Levine," decided to investigate top movie houses in Hollywood and Westwood, to see what state they were in. 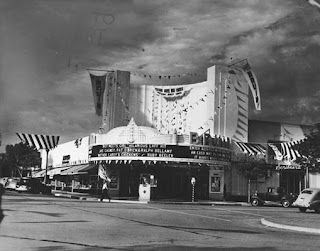 The article gave a favorable report of the Village Theatre, where the 1500 seats went for $4 and $2. Today, the seat count is 1341, and the prices are $8.50 up to $11.50. (CinemaTreasures explains that a 1998-99 remodel widened the seats, which cut down the number of chairs.) The Times said: "The granddaddy of Westwood theaters, no only in size but also in what remains of old movie-house charm...well-maintained and attractive." The acoustics produced and echo and the sound was too loud, but those were minor complaints. Parking cost ONE DOLLAR at "the big UCLA lot across Le Conte." Wow.

As for the Bruin, which also charged $4 and $2 for seats in 1978: "this theater projects an architectural combination of Art Deco and modern noncommitment."

Hmph. But the 800+ seats were comfortable (today, it's down to 696). Although "the men's room smelled bad" the theater was "generally clean."

The library dates this picture as 1938, which may mean this is the grand opening.