Music and Eco Fest at the La Brea Tar Pits 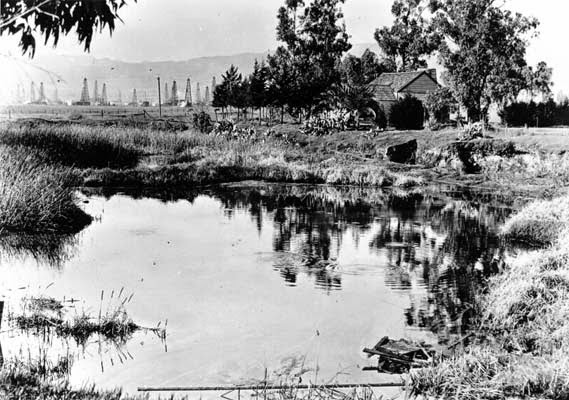 Today's guest post is from Lee Gale Gruen, a docent at the Page Museum and La Brea Tar Pits, (the picture at right is of the Tar Pits in 1920). She's also the author of the Featured Book in the right column,Adventures With Dad: A Father & Daughter's Journey Through a Senior Acting Class

A few years ago, I was one of several docents staffing the Page Museum booth at the Music and Eco Fest held on the grounds of the La Brea Tar Pits in Los Angeles, California, where its attendant museum, the Page, is located.  We had a lot of people of all ages stopping by our booth to check out the reproductions of a mammoth tooth and skulls of a saber tooth cat and dire wolf.

“Yeah, that’s his favorite this week,” responded his mother.

She said that her son had learned all about the animals by watching television programs devoted to Ice Age mammals.

Another child appeared at our booth clutching a DVD of a computer-animated, adventure movie called “Ice Age” which he had bought at another booth. 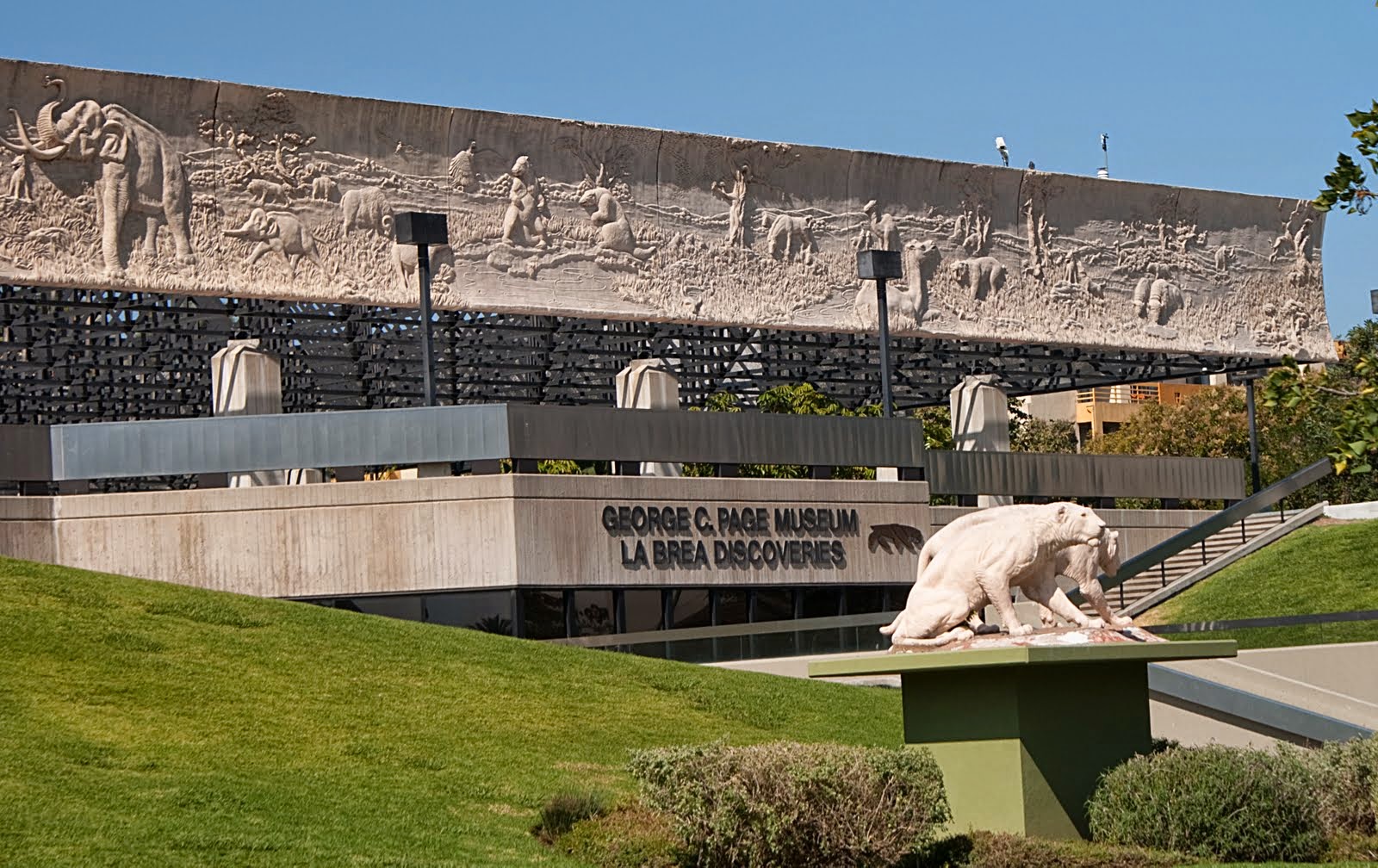 After a short while, a women appeared at the booth clutching a white plastic bag.

“Is there anyone at the Page Museum who would like to have this dead snake?” she inquired of me.

I was speechless, to say the least. That was definitely the first time in my life I had ever been asked such a question, and I guess my expression conveyed it. The snake owner explained that she was helping staff a nearby booth of the Southwestern Herpetologists Society. Various members had brought their snakes, giant lizards, and other assorted reptiles to display to the festival visitors.

The owner first got the snake 25 years ago and had displayed it many times at fairs and festivals. Today, when she opened the snake’s cage, she found it was dead. She seemed heartbroken.

I didn’t know how to answer her inquiry. Shortly, the docent coordinator arrived, and I suggested the woman pose the question to her. The coordinator was also stumped. The woman finally left, taking her snake with her.

Awhile later I took a break. I walked into the Page Museum to get some snacks set out for the booth volunteers. When I was about to leave, I walked up to the front desk where a few young men were selling tickets to the public. There was a lull in the visitor traffic, so I started chatting with them. Of course, I told them my amazing snake story.

“Why. What are you going to do with a dead snake?”

He explained that he wanted to pursue a career after college mounting ancient animal bones on scaffolds for display to the public. So, whenever he found a dead animal such as a squirrel or bird, he would bury it in his backyard. Eventually, he would dig it up to practice rearticulating the bones. He planned to use the snake for that purpose. 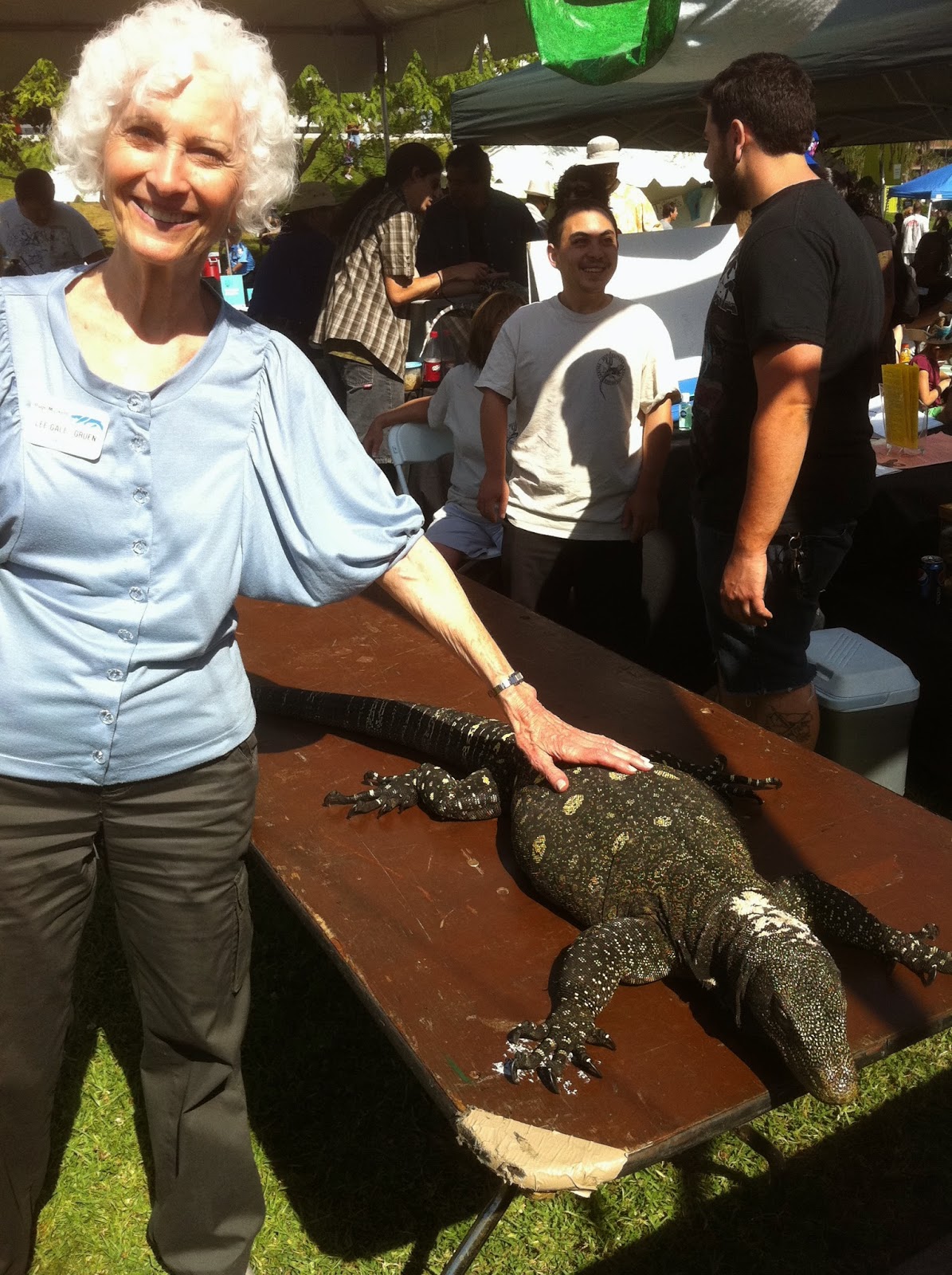 Off I went to the herpetology booth. I found the snake owner and explained about the museum employee, his pursuit of such an unusual career, and his interest in the dead snake. She agreed to give him the snake, but insisted upon accompanying me to meet him.

Just before I left, she was telling us that the snake had glaucoma. I caught a quick glimpse of its cloudy eyes. That was another first in this day of firsts. I had never before thought about snakes getting glaucoma.

I returned to the herpetology booth to see the reptiles. One of the people staffing the booth offered to let me inside the tape barrier since I was also a volunteer at the festival. He showed me all the reptiles and let me touch them. One, a crocodile monitor lizard, was about a yard long in the body with a tail at least one and a half times that length. It had long, black claws and a forked tongue that darted in and out.

“This kind of lizard can grow to a maximum of 19 feet in length,” he explained. “They are found in the wild in New Guinea, Timor and Indonesia, and are extremely dangerous.”

The crocodile monitor lizard, named Snowball, was two years old and not dangerous as it had been bred in captivity and was docile. I petted Snowball on the back. Its skin was bumpy, dry, and leathery to the touch. The owner took a picture of me with my new friend.

One never knows what being a docent at the La Brea Tar Pits and Page Museum will bring. Each of my experiences at the Music and Eco Fest would have been wonderful on its own. Putting them altogether, it was an amazing day.

Posted by Vickey Kall at 2:20 PM No comments: 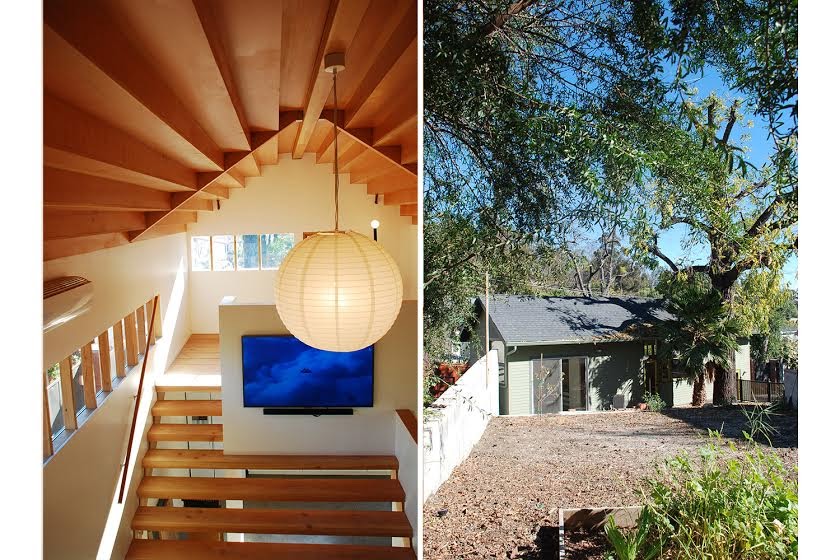 The pictures at right are of Bunch Design's Elysian Cottage, a small house in Solano Canyon that doesn't attract much attention from the outside. It's a 105-year-old cabin, basically. But inside, it's been redone to incredibly lovely--"contemporary, but also warm and intimate," as the blurb at de LaB says.

The ceiling is Douglas Fir and makes "the house feel bigger as well as cozy". And I would add compact, efficient, and full of views that bring nature right in to you.

You can see Elysian Cottage and several other homes designed by the architects who live there this Saturday, May 10. The tour is $45, and you can get tickets here.

The tour lasts from noon to 4 p.m. and you'll drive yourself to the different locations. Not all are wheelchair-accessible, and no children allowed.

Other homes on the tour are the Paige Residence by Tom Marble, the Murnane Project in the Moreno Hills of Silver Lake, and Buzz Court, also in Silverlake. But while the others are single homes in various styles, Buzz Court is six homes on a small lot with a snaky driveway that has views of the Observatory and more. Two of the units are occupied by the designers and will be open on the tour.

de Lab stands for Design East of LaBrea: a nonprofit that celebrates and supports local creatives in their efforts to improve and engage the city (borrowing loosely from their blurb).