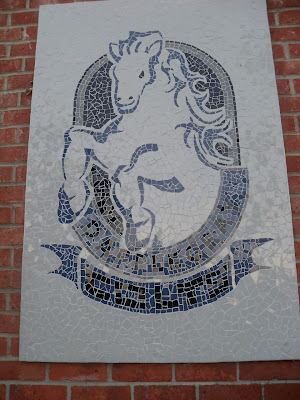 Finding schools in Palos Verdes is no easy task. Private or public, they are hidden away on winding roads, in dips and valleys, shrouded by rows of pepper or eucalyptus trees or ridges of high ground. Some, I am convinced, are accessible only on horseback.

Dapplegray Elementary does have one nice, ceramic tile sign overlooking PV Drive North, but otherwise...good luck. The school--and this mosaic--face away from street traffic, overlooking more rustic vistas. Quite nice, actually. With such lovely and well-tended public schools, one wonders why private academys do so well in the area...

This mosaic looks rather new, but I was not able to learn anything about it (when it was installed, who the artists were) from local newspapers. So...just another lovely example of how mosaics turn up in surprising places, ready to delight us.

Posted by Vickey Kall at 4:33 PM No comments: 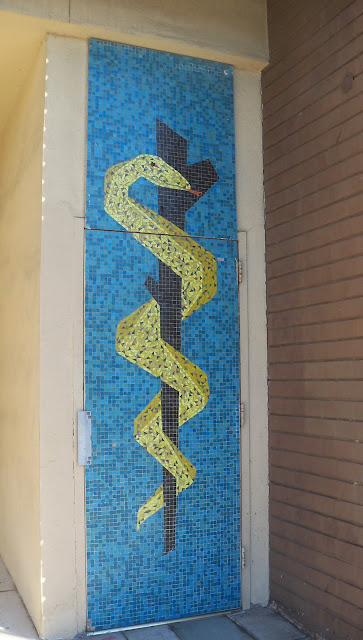 And by the way, when did Westchester become Playa Vista and why? Does it sound more exotic?

I digress. This mosaic puzzles me. I personally think it's lovely. I'm sure it was stunning when installed (before some bozo decided to cut a door opening through it). The snake, in particular, still fascinates today. The colors are bright though the tiles seem to be coming loose. And no one, as far as I can tell, knows anything about it.

The mosaic faces Sepulveda, just south of Manchester. The address is 8618 Sepulveda, and a sign on the building reads "Orthopedic Medical Group of the West." The sign may be dated, though there is a Sobol Othopedic Group in the building.

A call is in to the Historical Society of Centinela Valley and the building owners, so if I learn more I'll post it here.

Posted by Vickey Kall at 1:45 PM No comments:

Kick Off Christmas at the Million Dollar Theater 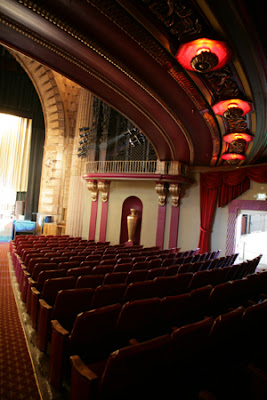 Take that as you like--kick off the season, or literally kick the holiday off into the wild blue yonder with a resounding "Bah humbug!"

Either way, the LA Conservancy is hosting a showing of Scrooge

starring Albert Finney and Alec Guinness on December 5, at 2pm. The theater's at 307 S. Broadway--the SW corner of 4th & Broadway. Free candy canes for the kiddies! And the movie is only $10 for adults. Buy tickets here.

The Million Dollar Theater was built by Sid Graumann in 1918--before his Chinese and Egyptian Theaters. The first movie shown there on February 1, 1918, was The Silent Man

, a western with William S. Hart.

The theater itself is at the bottom of a 12-story tower, and you can read about the architect and sculptor and more of the history at this Wikipedia page, or at PublicArtin LA. The facade was in Blade Runner!

Another piece of trivia: The building once housed L.A.'s Metropolitan Water District, and William Mulholland's office was on the top floor.

Graumann started a tradition of bringing in Vaudeville acts before showing the movie--acts that complemented the film. (Most theaters in those days started as Vaudeville houses and added a movie screen;. The Million Dollar Theater was the first big movie theater built here.) Years later, when the theater showed Spanish language films, live performers like Mariachi bands introduced the movie.

After decades as a movie house, the Million Dollar Theater served as a church for a bit. It re-opened as a live theater within the last ten years, and sometimes hosts movies--as it will on December 5 for the LA Conservancy. 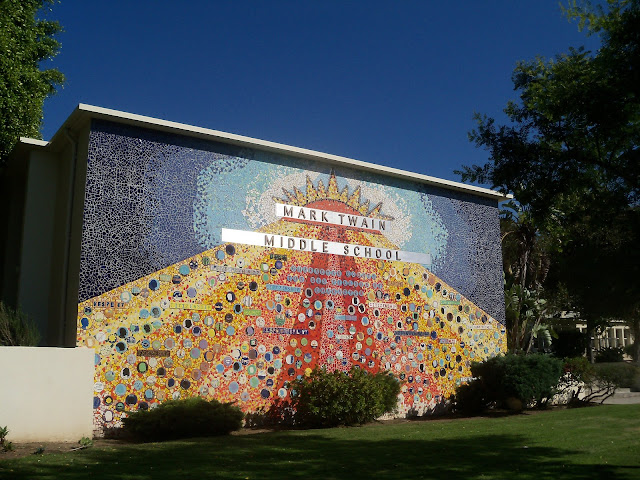 Mark Twain Middle School is in Mar Vista. That's all I know!  Well, that and if you look close you'll see that this mosaic is based on the Character Counts principles of James Dobson's Focus on the Family. I think.
Six days later: Surprised no one called me on this. I got my radio holy men (or is it holier-than-thou men?) mixed up. Character Counts--which I believe this mosaic represents--is actually the program of Michael Josephson.
Posted by Vickey Kall at 6:14 PM 1 comment:

A Quickie for Mosaic Monday 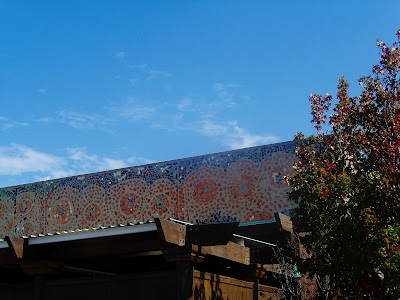 The last time I featured a less-than-lovely mosaic, I wrote that not all mosaics are works of art. What shall I say now? Shall I compare it to an autumn day?

Beauty is in the eye of the beholder, and truthfully, this design on the exterior of Marukai Market in Gardena, at Western and Artesia, is a lot prettier than plain beige paint. I see a sky and orange clouds--a not-too-unusual image when looking west at sunset or east (since the sky beyond is in the east) at dawn.

This Marukai Forum (as opposed to Marukai's other Gardena store, Marukai Pacific on Redondo Beach Blvd.) opened in 1996.

Posted by Vickey Kall at 3:13 PM No comments:

Ahh, weekends in LA...If it were 1926, we could go to the air show today and touch Admiral Byrd's North Pole Fokker plane. Man, is that a loaded suggestion. The plane had actually flown over the North Pole a few months before.

At Clover Field in Santa Monica, ten or twenty thousand people watched from their cars as stunt pilots performed death-defying acts. Truly...stunt pilots died in alarming numbers back then. 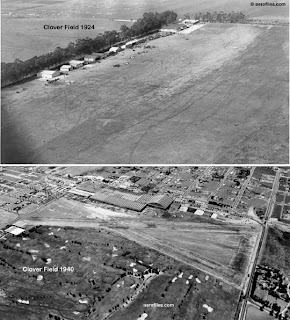 Clover Field became Douglas Air Field, and you can read about its history here, at Aerofiles.com.  That's also where I found this great picture.

At that airshow on November 7, 1926, Bobby Chase, a female parachutist, got caught in the plane's gear when she jumped. Chase dangled in the air for 20 minutes before Fred Osborne and Al Johnson, in another plane, flew to her rescue. According to the Los Angeles Times, Osborne actually wing-walked to Chase's plane,  several hundred feet up in the air, so he could cut the safety line that kept her dangling. She deployed her parachute, landed on a street near Venice beach and sprained her ankle on a curb.

The parachutists were vying for a prize that went to the jumper who landed closest to a mark on the ground. A 17-year-old girl named Jackie Dare won...wonder if that was her real name?

Pilot Paul Richter set an altitude record at the air show, climbing to 18,000 feet. He went on to found TWA.

Richter, Fred Osborne and Al Johnson, btw, were members of the "Thirteen Black Cats," the first group of Hollywood stunt pilots. They were also called the Suicide Club.

Al Johnson wing-walked and changed planes that day--as a scheduled performance, quite separate from the rescue of Ms. Chase. This was a daring, popular stunt, hopping from one plane's wing to another. The two planes actually crashed slightly in midair, tearing fabric from one wing. 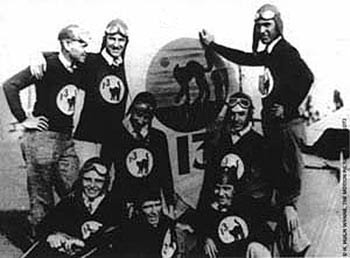 In another parachuting stunt, Johnson jumped from a plane later, and his parachute failed to open until it was too late to avoid being hurt. The newspaper account said he suffered no serious injury, but I recall reading elsewhere that he was injured (either his back or his neck was broken) but he didn't want to lose work because of it and kept it quiet.

According to this site on early stunt pilots, Johnson is in the center of this photo, kneeling next to the numeral one in "13." Hope they don't mind that I borrowed their photo of the 13 Black Cats, but it does seem to be "borrowed" by every other site from somewhere....

Johnson's one screen credit is Hells Angels, and apparently he crashed in Glendale while filming--got tangled up in power lines. That and other early valley aviation is described in the The Valley Observer blog. The book It Happened in Hollywood: Remarkable Events That Shaped History (It Happened In Series)

says that Johnson died in that crash when the plane exploded. I'm not sure of that...would love to know if it's true or what happened to Al Johnson.

Anyone care to enlighten me?

Lady Liberty in the Fashion District 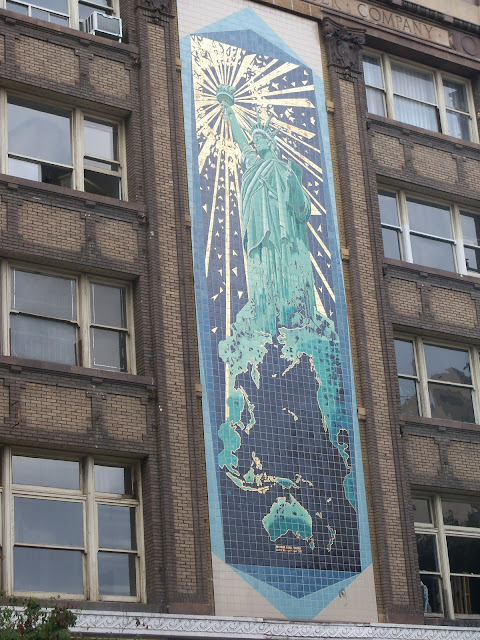 Does Lady Liberty fit the definition of mosaic? I think so. PublicArtinLA calls it a tile mural, but mosaics are art made with pieces of stone, glass, or other materials.

This fifty-foot-tall tile picture looks west over Los Angeles Street, and is part of the Lady Liberty Building, which went up in 1914. The picture, though, was added in 1987--a year after the Statue of Liberty's centennial.

According to PublicArtinLA, artist Victor di Suvero approached the owners of 843 Los Angeles St. in the 1980s, knowing they were immigrants from Iran. He suggested and designed this patriotic artwork and they liked the idea. Barbara Beall Studios in Torrance fabricated it, and Judith Harper fine-tuned and executed the design on six-inch tile. 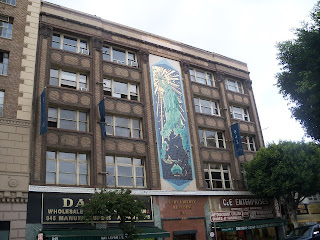 Here's a broader view. Mr. di Suvero was also director of the Poetry Festival LA (The Fringe Festival) in 1987, which makes sense because he is, first and foremost, a poet. Wikipedia identifies him as a poet, playwrite, entrepreneur, and real estate investor. As for Judith Harker--there are many of them, but I could find no reference to an artist by that name. Barbara Beall moved her art studio from Torrance to Santa Barbara, but her work adorns the Autry Museum, Epcot Center, and other well-known places.

Posted by Vickey Kall at 1:34 PM No comments: