Tiki On the Move 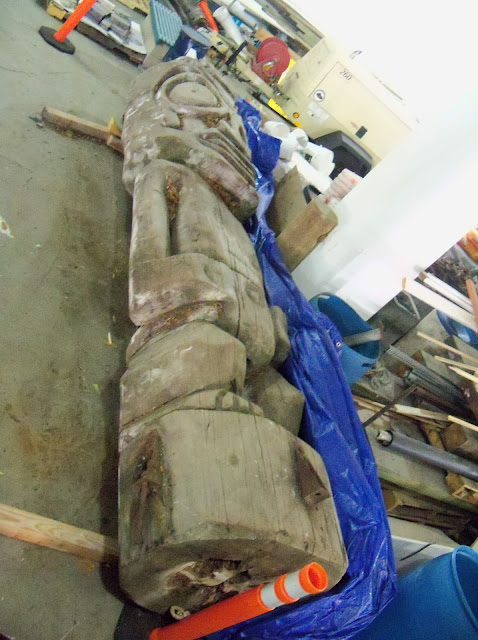 This tiki statue, carved of redwood (not looking too red now) is being brought out of suspended animation by the city of Redondo Beach.

Is it part of history? Depends. Linda AUst of the Redondo Beach Historical Society pointed out that the restaurant(s) it once stood guard over didn't last long enough to become historical. The last one, in fact, burned in the Great Redondo Beach Pier Fire of 1988.

Read more of the tiki's history at my Patch article.

Posted by Vickey Kall at 8:23 PM No comments:

An Under the Sea Mosaic to Cool Us Off 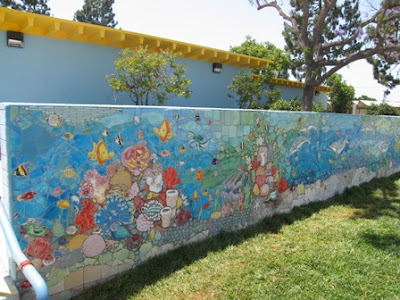 This mosaic was intalled only three years ago, at the George W. Carver Park Pool House in 118th Street.

Here's what the LA County Arts page says of it:

"Artists Matthew and Paul Doolin of Topanga Art Tile designed a glass and ceramic tile mosaic mural which depicts a vibrant and whimsical underwater ocean scene. The 33-1/2 by 4-1/2 mural faces the street entrance to the pool house. It features a sand bar of beige tones, a variety of green and blue tiles depicting the water, two large sea turtles, several multi-colored fish, and a pod of dolphins swimming throughout the scene. Several smaller fish are installed around the main entrance door." 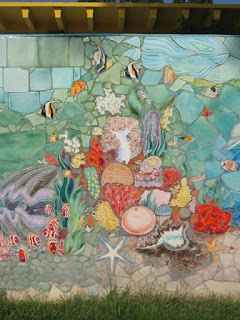 The site goes on to say that Matthew graduated from UCLA (rah!) in 1990 and Paul from UC Santa Cruz the same year. Both brothers have an impressive list of people they've studied/worked with. They've done work for Disney's California Adventure, St. Catherine's Church on Avalon, the Inn at Venice Beach (the mermaid mosaic), and the Topanga Canyon Public Library and more (I cherry-picked the closest projects). They've also been featured at the Pacific Design Center.

Topanga Art Tile, btw, also includes the brother's mother, Leslie Doolin. In fact, I believe she started the company, in 1978.

I'm blown away by their website and will definitely feature more of their public work on future Mosaic Mondays. 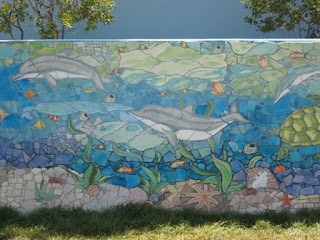 Some of their loveliest pieces, though, aren't necessarily public. The do a lot of custom art for pools, fireplaces, fountains, etc. All in brillian colors, lots of blues and greens, and all of hand made porcelein and hand painted glazes.

Posted by Vickey Kall at 2:49 PM No comments:

This wonderful bit of Boomer nostalgia is from the Shorpy site, which includes photos from all over the US, from the Civil War era up through the 1970s: 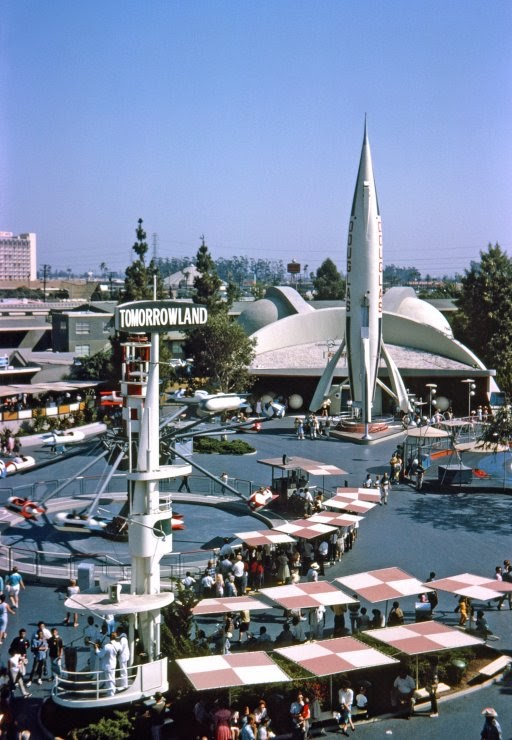 This is what Disney dreamed the future would look like. 46 years later, how do we measure up (or down)?

Posted by Vickey Kall at 2:50 PM No comments:

Stuff to do in Los Angeles: August 28

For many, it's the last weekend of summer. It promises to be hot, but not unbearable. Put on a hat and bring a bottle of water; you'll make it (I learned that from 2 years in the Valley of the Sun.)

Here are your choices:

EyeSpy LA has a list of other events, but these are the ones I'd go to.
Posted by Vickey Kall at 1:56 PM No comments:

Email ThisBlogThis!Share to TwitterShare to FacebookShare to Pinterest
Labels: events 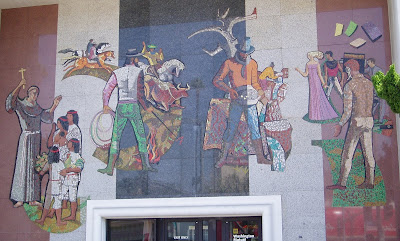 The bank is on Ventura BLvd at Laurel Canyon. Millard Sheets by this time (1970) had designed and installed the artwork for dozens of Home Savings and Loans in the Southland. For this bank, he put up four scenes of California History, all iconic, generic, romantic, and really, very functional as an outline of what we all learned in 4th grade.
First, in the Mission Era, we have the good Franciscan friar teaching the native family about the cross.

Third, the Gold Rush: Men pan for gold along streams.

Finally, the Movies! The industry that ended up defining Southern California to the rest of the world.

Adam Arenson, who took this picture for his blog on the artwork of Home Savings and Loan, points out that the camera is pointing left, possibly at the other images. He raises the question: "Are the images about history, or about movies?"

Studio City got its name after Max Sennett moved his studio--Keystone Pictures--here in 1928, right? So while the Gold Rush may not have touched the area too much, the other images fit perfectly well.

Here is a link to a Flickr picture of the mosaic at night, rather artsy, by C. P. McGann.

Posted by Vickey Kall at 6:11 PM No comments: 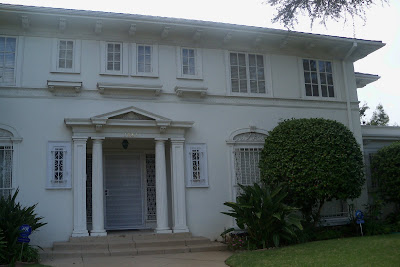 This is the Lafayette Park mansion that theater owner Alexander Pantages built for himself in the early part of the 20th century. It sits on the corner of Buckingham Road and Washington Blvd. Not sure when it was built--my channel to Proquest is down right now. Boo!

And below is the biggest ficus tree ever--I think it's a ficus. Just beyond it is Washington. Was it there since Pantages' day? Maybe he planted it himself? Quien sabe?

Pantages was living here in 1920 according to census records; by 1930 the owner of record was Edward Cline--which makes sense, because by 1930, Pantages had been ruined--some say by the machinations of Joseph Kennedy. 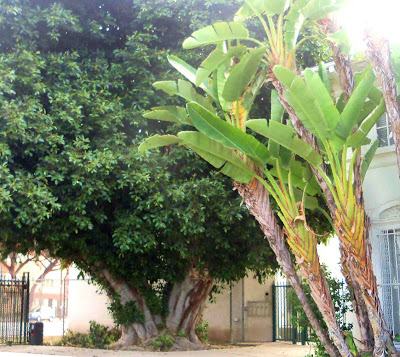 Well, if he was the man who destroyed Pantages' health and reputation, as well as forcing him to liquidate his homes and theaters to defend himself against rape charges, Kennedy benefitted because he bought many of Pantages' theaters for pennies on the dollar.

Here's 7 things you may not have known about Alexander Pantages:

Posted by Vickey Kall at 7:35 PM No comments:

The Mayme Dear Library in Gardena was named after a librarian.

I love the name. Some cousins of mine had a silver-haired grandmother called Grandma Dear. The grandkids gave her that name because she called everyone "dear."

I am certain, therefore, that this lovely librarian called all the children "dear" when she handed them their books.

On to the mosaic! 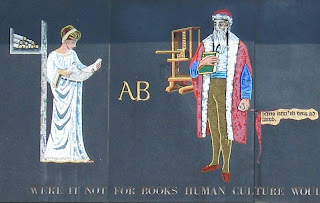 It's mounted over the entrance and shows the development of books and printing. on seven slabs of black stone. A hand print precedes the the Egyptian writers--the handprint representing cave paintings. Underneath it all, a quote from Pliny the Elder: Were it not for books human culture would pass into oblivion as quickly as man himself.

Nice quote, but I must respectfully disagree. But since Pliny died in the eruption that buried Pompeii, we can't have a debate.

The artist is Livio Napolitani, and the artwork was created for the new library building, dedicated on December 5, 1964. The mosaic was cleaned and repaired in 2008. Another set of Napolitano's mosaics was profiled here last year. 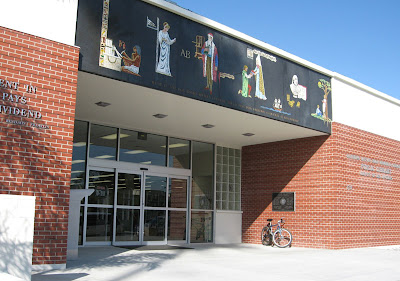 The Berlin Wall went up--or began to go up--fifty years ago, August 13, 1961. The kick off was the closure of the East Berlin border, halting a stream of refugees who wished to escape to the West.

The paper reported that our government--in the person of Dean Rusk, Secretary of State--protested the border closure because it violated agreements made in 1949 between the US, Britain, France, and the USSR about the free right of travel within Berlin. Rusk waited to see "how violent the East German popular reaction would be."

What else was going on?

In Long Beach, a ten-foot porpoise wandered into shallow water off Cherry Avenue, but got away from the beachgoers who tried to seize it.

The temperature got up to 83, and in the evening humidity was 90%. Yuck!


Redondo Beach's new $30 million King Harbor Marina project was moving right along. Basin 3, which I believe is today's International Boardwalk, had replaced Pacific Avenue and fishing boats were berthed there. Parking meters for yachts were being installed. 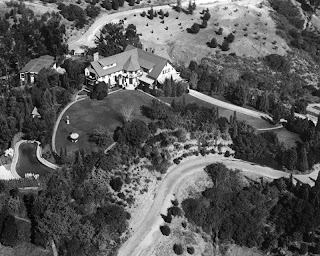 Mary Pickford and Buddy Rogers threw a 100th birthday party at Pickfair for Clementine Van Quaethem. Who was she? An immigrant from Flanders, Belgium, who arrived in America in 1948--when she was in her late 80's. She spoke only two words that could be understood in English: Mary Pickford.

Mrs. Van Quaethem's widowed daughter lived at Pickfair because her husband had been the head gardner. Her mother moved in, never learned English (geesh, she was only 87!) and that's all I know--could not find any further mention of the lady anywhere.

The picture of Pickfair, showing the pool on the lower left, is from the LAPL collection and was taken in 1926. It's not attributed to any particular photographer--wonder if it was Robert Spence?

St. Peter's by the Sea Mosaic 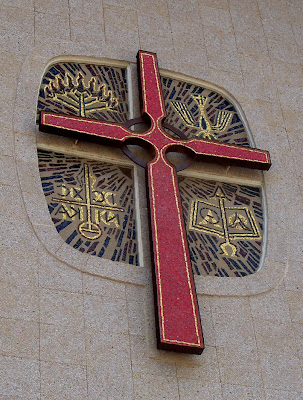 This lovely mosaic decorates a presbyterian church in Palos Verdes, St. Peter's by the Sea.  The church is part of the Presbytery of the Pacific, which apparently covers Hawaii and Los Angeles County.

I count the windows and their stained glass as part of the mosaic--click on the picture for a larger view and I'm sure you'll agree. The design is continued on the doors, pictured at the bottom of this post.

The website has none of the church's history, so I went into Proquest. The Los Angeles Times reported a bit of controversy in 1996 involving the church's pastor, Rev. James D. Brown. He'd just served a term as a top management official in the church and expected to be re-elected, but apparently he was scapegoated in the controversy over appointing gay pastors. Not that he was gay, or that he even held a contrary opinion on the issue. If I'm reading the Times story right, people were just mad and voted him out.

Since I know very little about the politics of the Presbyterian church, I can't add much. The first mention of this lovely church in the Times is 1979. 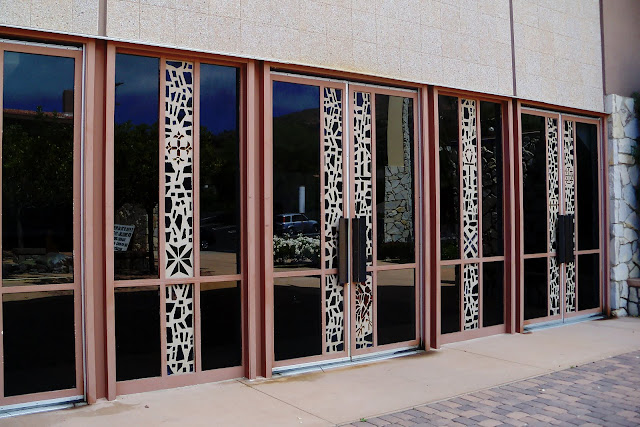 Posted by Vickey Kall at 9:48 PM No comments: 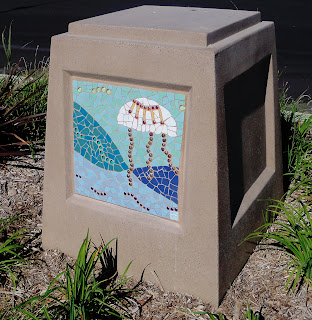 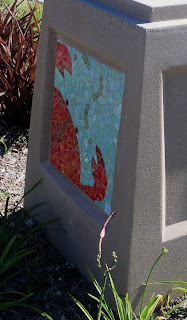 Everything Mosaic is made up of two very talented artists (Debbie Collette and Patti Linnet--sounds like the beginning of a bawdy limerick, doesn't it?) who happen to work together at Tulita Elementary School.

Katherine Blossom Lowrie wrote about them for Patch in Redondo Beach. Here is what Lowrie says about how Everything Mosaic started: 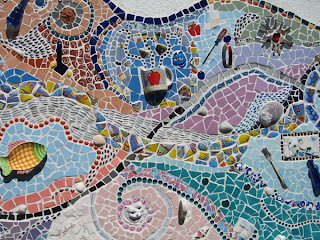 Five years ago, Collette and teaching aide Patti Linnet decided to create a mosaic out of extra mugs presented to teachers by the Tulita PTA. The mosaic, which graces the Teacher's Patio, ended up incorporating mementos contributed by teachers from the school's pre-renovation days—everything from keys to a fork to a screwdriver.

Lowrie's picture of a portion of the Teacher's Patio at Tulita School is at right.

About a year and a half ago, I blogged about their first venture: the Ocean Steps mosaics, leading from the Village Condos to the International Boardwalk at the base of Redondo Beach's pier. 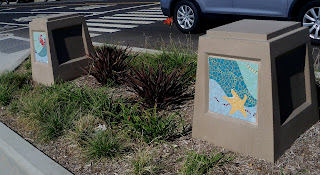 Everything Mosaic has just installed another piece of art for the city, on five bollards on the Esplanade at Avenue C. Each bollard has two mosaics on it, one facing the street and one facing the ocean.

A bollard, btw, is a short post....I could almost call this piece a bollard by that definition! A bollard is a short post, architecturally speaking, made of stone or metal or wood.

Posted by Vickey Kall at 7:03 PM No comments: