"I see the power of movement through shoes - shoes of all colors, all sizes, all styles, all shapes and all moving. Shoes then become the transient tool moving the human spirit from place to place and in all directions. Without the energy of people in motion, there would be no need for other types of motion." 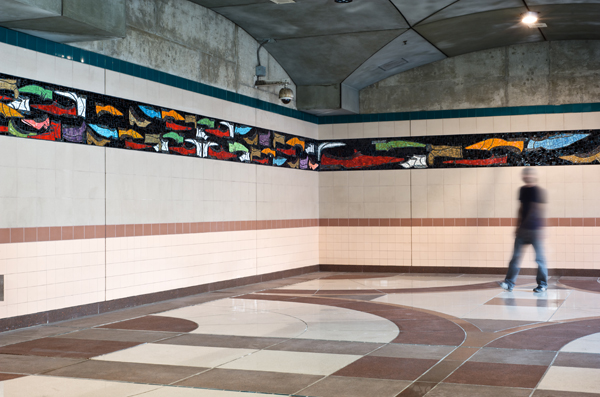 This is how Tyree Guyton describes the mosaic he created in 2010 for the Red Line Metro station at Vermont and Beverly. it's two feet tall, and wraps around the wall for 115 feet. It's created of smalti and cake glass and was fabricated at  the Miotto Mosaic Art Studio in Carmel, NY. 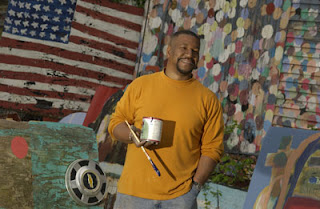 Guyton is an international artist with exhibits all over the world, but mostly he works in Detroit's East Side, and his Heidelberg Project is his most famous work, I think. It's an entire neighborhood, transformed into an indoor/outdoor gallery. According to his own website, he wants to turn the "two-block area into a state-of-the-art Cultural Village."

Shoes are a continuing theme in Guyton's artwork. Below is a picture of a 2011 art installation in Detroit, I think part of the Heidelberg Project, from a blog titled "Adventures and Resources." I found this insight there:

There were quite a few shoes about.  In his work, the shoes are usually connected with the homeless people.  Respect and appreciate the “unwanted ones.” 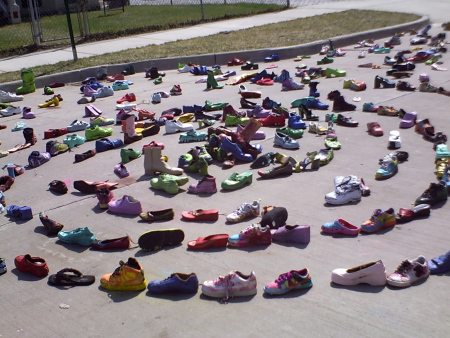 Posted by Vickey Kall at 5:59 PM No comments:

Neon is beautiful, especially at twilight, so here is a one-minute video, courtesy of LAist and accompanied by music, paying tribute to the apartment signs over Los Angeles buildings. Film shot by drone, so yes--there are legitimate uses for the annoying things.

And while searching for a photo to use when I tweeted this video (I'm @vkhistory, btw) I happened upon a Pinterest page of wonderful Los Angeles vintage and modern shots, called City of Angels 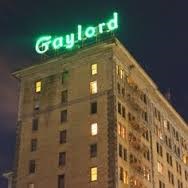 At left is the picture that sent me to that page.

But of course, there are other Pinterest boards about Los Angeles, and I have spent way too much time looking. (That's why I don't go to Pinterest too often.) One excellent board to follow is "Signs and Signposts" which starts with a mini-history of the Packard signs from the 1920s. Not all of the signs are in Los Angeles, though--in fact, most aren't.

Incidentally, a couple of years ago I had the pleasure of hearing Dydia DeLyser talk about her research into that Packard sign, courtesy of the Los Angeles Visionaries Association (LAVA) and their last-Sunday-of-the-Month talks. If you're interested in Packard sign, the first neon sign in Los Angeles,this LA Times article sums it all up neatly.

Here's another page called "Retro Neon Signs in Los Angeles & Surroundings (plus: some really cool dives)." Surroundings in this case = Palm Springs and Vegas. Wonderful pictures--just not too many of them. 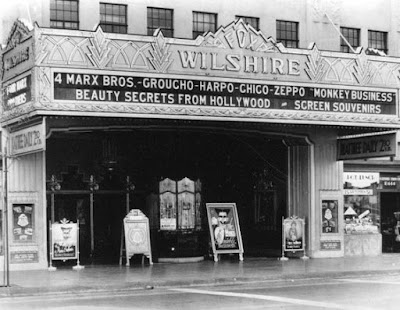 One of my favorite Pinterest boards is owned by Martin Turnbull, writer and creator of the Garden of Allah novels. In fact, if you go to his site you can get the first two books free (ebooks only) just for subscribing to his mailing list (which you can always unsubscribe from later).

Martin has annotated the vintage black and white shots with brief histories, that about 50-100 words long--which I love.

His page has the cumberson name of "Historical and Vintage Photographs of Los Angeles and Hollywood" so just follow it so you don't have to type that, ever.

This photo, of the Wilshire Theater in 1931 showing Monkey Business with the Marx Brothers, is priceless. I did not know till reading his caption that it is today's Saban Theater, though. ... and I've strayed from my theme of neon signs. Dang Marx Brothers; they get me every time!

Just looking at this photo, I hear Shelley Winters as Minnie Marx in my head (from the musical Minnie's Boys): "Whatsa matter? The audience can't count?"

Posted by Vickey Kall at 2:50 PM No comments: