Back to LAX for Mosaic Monday 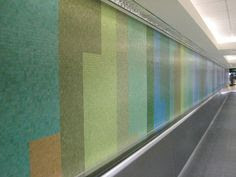 A couple of years ago, I blogged about the mid-century mosaic walls at the terminals at LAX. Five long mosaics were installed in 1961. One thing I got right was that the mosaics have a geographic theme:

The blue as you start down the tunnel represent the sea, and the gold and brown tones are our nation's heartland. Apparently there is one vertical line of red right in the middle (I don't remember that), then at the other end, blue again: Sea to shining sea.

Compare that to this description by the artist: "I started with the blue on one side, then the earth colors, then, in the middle, I had one red element, then the colors reverse. My idea was that you'd see the same colors going from the ocean to the middle of the country, over the prairie, then back to the ocean"

What I got wrong, it seems, was attributing the mosaics to Charles Kratka. He was indeed the head of Interior Design when the airport was being modernized, but the mosaics were designed and installed by artist Janet Bennett, currently of New York. At the time she worked for Pereira and Luckman, who designed most of the airport we know now. 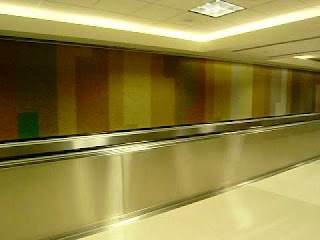 There's a very informative and engaging article about Janet Bennett and the LAX walls in Modwall's Liveyourcolors blog. The quoted description above came from there.

Bennett is trying to set the record straight. She first saw Kratka given credit for her work when she read his obituary. As she wrote to me: "I gritted my teeth so hard that I cracked a tooth when I read the obit eight years after it was written."

Perhaps, Bennett speculated, his daughter was responsible for the claim that appeared in Kratka's obituary--which is where I found it. Bennett says that two other architects had taken credit for the mosaics as well--but not in print.

The story has spread--Google LAX mosaics or tunnels, and you'll find many pictures labeled with Kratka's name.

In blogs and articles, too, I'm not the only one who got it wrong. Alison Martino's article on the mosaics in Los Angeles Magazine last year also attributes Kratka as the artist. Martino focused more on the movie and TV show use of the mosaics, especially Mad Men, so maybe I'll have to watch that show. Eventually.

As Bennett states in the Liveyourcolors piece, she wouldn't have minded if the architectural firm had gotten credit--but not another artist. Now, so much time has passed that proving her word is difficult.

I wonder if any architectural history students could take this up as a thesis project, documenting the interior design of the airport. The official records are probably still around, right? 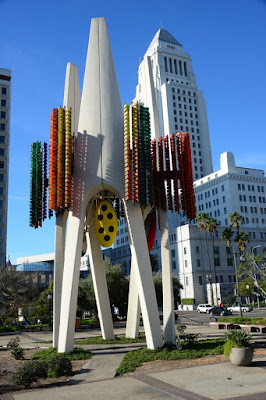 Originally installed in 1975, the work is by the late Joseph Young--I've blogged about his mosaic work before, but the Triforium is unique. Not a mosaic but a six story-high sculpture sitting at Temple and Main, fitted out with a carillon of glass bells. Nearly 1500 glass prisms--actually, hand-blown bits of glass from Murano, Venice--give a nod to mosaics (at least in my mind). In 2006 the Trirforium was cleaned up and the burned-out light bulbs replaced--but no effort to update it was made.

Now, both LACurbed and the LADowntownnews blog (also the source of this photo) report on fundraising efforts to refurbish the Triforium so that it functions even beyond the hopes of its creator.

A website called TheTriforiumProject that explains the push to update a piece of art that was, enthusiasts say, far ahead of its time.

Improvements would include replacing the light bulbs (largely burned out again) with long-lasting LEDs and creating a new computer to synchronize the music and lights. Not hard to imagine that the original 1975 software failed to do that consistently. But what sort of computer did you work on in 1975? (ummm, none. I'm not even sure that whatever was installed in the Triforium in 1975 can be called a computer.)

You can see many pictures and links to press coverage of the December 11th birthday party on the Joseph Young Fan page on Facebook. 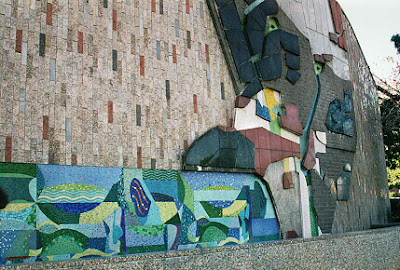 The picture at left, clearly not the Triforium, is nearby at the County Hall of Records on Temple Street. It's also public art by Joseph Young; it it is a mosaic, and I'll switch gears and talk about it soon--promise.

The best pictures I've found of the Triforium are with an article from the California Historical Society--it even has an early rendering showing lasers shooting out of the tops of the pillars! That proposed feature was cut early on--not just because of soaring costs, but I suspect also due to technology constraints.

That well-researched article by Jessica Hough includes a biography of Joseph Young, color photos of the Triforium under construction, and Young's own words about the project.

Young envisioned his "kinetic color-music sculpture" as interacting with the people that passed by. Today, plans might include an app. Seriously. Triforium.la proposes an app that would allow "people to send "polyphonoptic" compositions for the Triforium to play." That sounds perfectly reasonable to me, but five years ago I would have laughed at the idea. 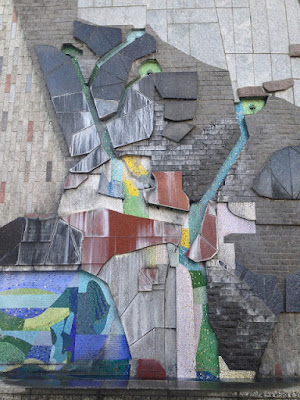 AND . . . because it is, after all, Mosaic Monday, I couldn't help but notice that Ms. Hough's article for the California Historical Society also includes this beautiful photo of one of Joseph Young's other works, the one I referenced a few paragraphs ago: the 1962 mosaic fountain titled "Topographic Map of Water Sources in County of Los Angeles" which is located at the Hall of Records on Temple Street. Beautiful, yes, because it shows that this work of art also needs some TLC.

According to Jessica Hough (who also took or owns this picture), "Young worked with architect Richard Neutra on the design that includes a topographic map of the city."

This photo and the pictures below, showing the mosaic in better and non-drought years, come from the LA County Arts Page. There I learned that:

Artist Joseph Young worked closely with the building’s architects, including Richard Neutra, to achieve a design for the wall. Young first designed the mural to portray only geological features and later added water sources to tie the mural together with the reflecting pool Neutra placed at the wall’s base. The mosaic’s map imagery was inspired by the records and maps kept within the Hall of Records.

The mosaic was cleaned and refurbished in 2007-8 by Donna Williams, and that when she was done, "for the first time in 20 years, water flowed through the mural."\ 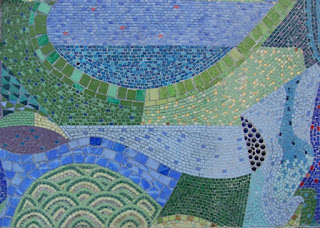 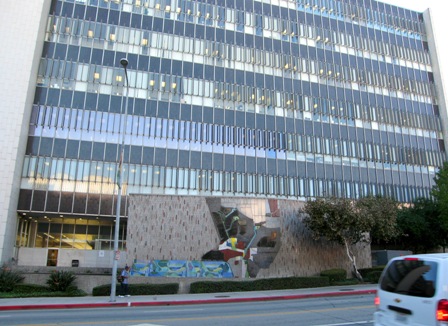 Posted by Vickey Kall at 7:54 PM No comments:

For your viewing and listening enjoyment: 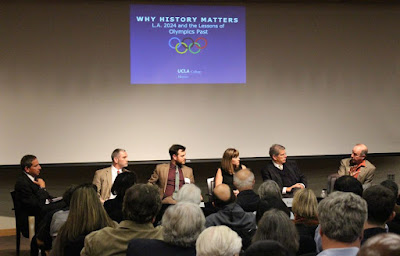 On December 4, 2015, UCLA presented a conversation about the Olympics: Why History Matters: L.A. 2024 and the Lessons of Olympics Past with panelists Zev Yaroslavsky, Barry Sanders, David Phillips, Peter Chesney and Caitlin Parker.

You can watch all of it here.

Professor/Moderator Steven Aron jokes that "history is too important to be left to to historians," meaning academics. If you love history enough to listen to how the talk came to be and why certain panelists were chosen, you're in luck: it's all here. And Professor Aron is an engaging speaker. Or you can jump into the discussion of Greece and how the ancients conducted their games, starting at minute 12, and enjoy from there.

Alternately, if you want to hear Barry Sander's comments about the status of Los Angeles' bid for a future Olympics, and Supervisor Yaroslavsky's warnings about hosting costs, that starts about 27 minutes in.

I learned a lot of trivia, which I love. Did you know Tom Bradley, our former mayor, hopped fences to sneak into some of the events in the 1932 Games? Or that 25,000 palm trees were planted here in anticipation of the 1932 Olympics? And that palms live, on average, about 90 years so they're all about to die? Hah!

The entire talk is about one hour and twenty minutes long. 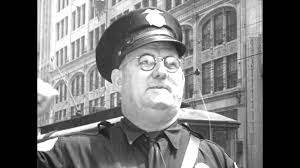 It that is too much or too serious for your Sunday afternoon, then here is a 1946 police training film on how good traffic cops should behave. This film is quite officious and smug but in a most campy way. Officer Tommy, at 9th and Hill, does everything wrong. Oh, Officer Tommy! You silly man! But the fun is not just seeing our traffic almost 70 years ago and spotting landmarks like the Orpheum Theatre and the Eastern Building--or Eastern Columbia Building (about 3 1/2 minutes in). What I found so fascinating is how much things have changed. Would any traffic cop today wave cars into crosswalks and hold pedestrians just inches out of harm's way?

This film appeared on the LAist, and their comments are well worth reading

Posted by Vickey Kall at 7:24 PM No comments: 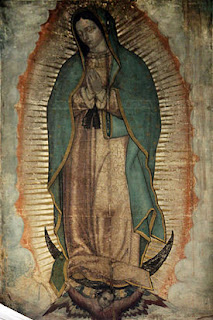 In June of 1911, the Los Angeles Times reported a mystical event taking place at a homestead near Whittier. "Mexicans as well as their more patrician relatives of mission ancestry" (whatever that means!) were flocking to see the miracle: a picture owned by Senora Manuela Plaz radiating light in the darkness. Hundreds of people came to experience the vision, in which rays of light shone from the picture while the woman who owned it knelt on the floor to pray.

The picture--a "battered and broken portrait," according to the Times, was of Our Lady of Guadalupe. That's a phrase familiar to most Catholics. Los Angeles has more than one church named for this vision. Besides a couple in the city proper, there are also Our Lady of Guadalupe Catholic churches in Irwindale, El Monte, and Hermosa Beach.  She's popular and revered, and her feast day is December 12--which is why I was scrolling for her in our old newspapers.

Nearly 500 years ago, the Mother of God appeared to a humble man of Indian descent near Mexico City. She left her portrait on his plain cloak, and it is this image--replicated a zillion times--which Senora Plaz, late of Durango, Mexico, had in her home near Whittier.

The newspaper also placed the vision near Los Nietos, so I'm guessing that means it was in West Whittier. I wonder if anyone today remembers the incident or heard about it? Perhaps there's a note at the historical society? Nothing more is mentioned in the Times, and internet searches of Manuela Plaz got no results. But--and again, I'm guessing, something drove hundreds of people to Plaz's home over a century ago. Even if the TImes only covered it once, it may have been an recurring phenomenon, building up a bitof anticipation as the word spread.

And then it was forgotten. Oh, well.

Posted by Vickey Kall at 9:12 PM No comments: