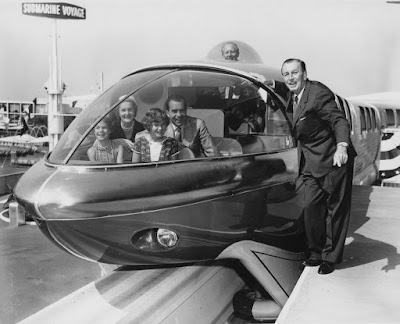 Whilin' away the holiday weekend? Here's some fun, nostalgic pictures to pass the time.

Technically, Disneyland is not in Los Angeles. But I don't care; it's only as far as Anaheim. Angelenos go there regularly and love it as if it were our own home town.

Renie Bardeau was at Disneyland for 40 years, taking beautiful shots of the park's rides, fireworks, and scenery, as well as of celebrity guests who posed with Mickey and Minnie. There are photos of Walt Disney as well, including one that I read is truly iconic: a black and white image of Sleeping Beauty's castle in the early hours before Disneyland opens for the day, its pathways slick with water. Right in the middle is Walt Disney, hands in pockets, taking a stroll through his quiet domain. It's titled "Footsteps" and you can see it here.

And for your visual enjoyment, a hundred of Bardeau's photos are gathered together in a slide show presented by the Orange County Register. Enjoy!

Bardeau was a college student when he first started working for Disneyland in the late 50s. This photo of VP Richard Nixon and his family in a Monorail is an early one in his career. That's Art Linkletter, up there in the bubble top ready to play pilot, as Walt Disney himself poses outside. The occasion--and Bardeau's first big assignment--was the dedication of the Disneyland Monorail System.

I will understand if you want to go straight to Annette's picture--she's number 55. You'll also find photos of Michael Jackson, Jim Carrey, Nat King Cole and other celebs, athletes from Joe DiMaggio to Kobe Bryant, presidents and heads of state, performers like Artie Shaw in concert, and much more. Then there are the shots of the park itself, of rides in motion, flowers surrounding the castle,fireworks exploding, and the attractions that have never changed as well as some that have disappeared.

Bardeau, btw, started with a summer job and became a staff photographer, enjoying a warm relationship with Walt Disney himself. For the last 23 years before he retired in 1998, he was chief photographer. As the OC Register says, he has some stories. He now lives in Arizona. 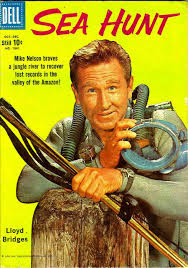 Who remembers Sea Hunt? I was surprised to learn it only ran for four seasons (1958-1961) because it seemed such a big part of my childhood TV viewing. And everyone watched it!

Here's a bit of trivia. Did you know that Leonard Nimoy appeared in eight episodes? Long before Nimoy was Spock, he was a bad guy named Tyler, and a jerk named Finn, an abalone diver named Johnny, and more.

Many episodes of the show--including some in which Lloyd Bridges' son Jeff appeared--were filmed at Marineland of the Pacific.

I wrote about Marineland's history for Patch a few years ago. It was the second marine-life water park, not the first. The first--Marine Studios--opened in Florida in 1938, and it was a smash. So the owners decided to try something even bigger out west.

The same architect that would design LAX's Theme Building, William Pereira, laid out Marineland in the mid-50s. But there were no fishies until the very last minute. Just a month before the scheduled opening, a ship was sent out to collect marine life to fill the aquariums and tanks. The four original dolphins that performed were flown in from Florida, where they'd been trained at Marine Studios. 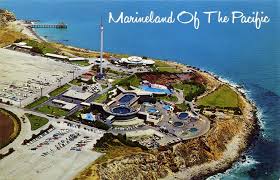 The new park was not successful at first, so the owners decided they needed something like a whale to wow the crowd. I like to think Mike Nelson would not go along with that reasoning.

Anyway, the same ship that had collected fish was now tasked with finding a whale. Skipper Frank Brocato and his godson Boots Calandrino were up to the challenge, studying whales and devising their own equipment to capture one. Calandrino described it all for Westways Magazine years later. The whale they caught was only 12 feet long, and no one knew if whales could be trained to do tricks. But just having her, the owners thought, would bring in more customers.

They were right, and Bubbles exceeded all expectations. She was a whale with personality, and everyone loved her. Bubbles the whale was entertaining crowds when Sea Hunt debuted, and she continued to delight audiences into the 1980s, when. in a bit of skullduggery that locals have never quite gotten over, Bubbles was whale-napped along with many other creatures, and shipped to San Diego. Marineland closed, and the property sat empty for decades.

There's Marineland, above right. And below on the left, is Terranea Resort, the expansive luxury hotel that occupies the land today. 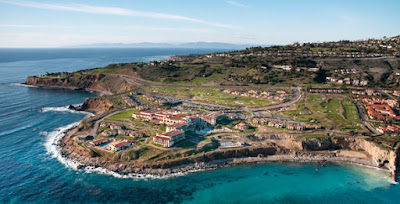 Terranea has a great restaurant named Nelson's, right on the coast. And it's named in honor of Lloyd Bridges' character in Sea Hunt, scuba diver Mike Nelson.

Pictures of the TV show like the one above line the walls. Dozens of them, and 8 by 10 glossies as well, along with other memorabilia, like a rowboat hung from the ceiling.

You have to hike to get from the parking lot to Nelson's, which is way out by the water. But it's worth it. They even have an open air service area where hikers can sit with their dogs. My kinda people.

Yes, you'll pay $20 for a burger. It's a very good burger. The food at Nelson's is more than excellent. The blackened salmon on my salad was probably the best salmon I've had in a couple of years, and the others in my group were equally enthralled by their meals. We're all still smilin' when we think about them. 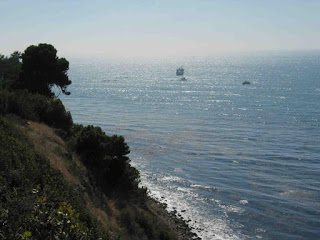 The only bad thing is that all the Sea Hunt stuff is indoors. And the best place to sit, weather permitting, is outdoors.

The view is too gorgeous and the sun too dazzling to stay inside. So you'll only see the cool stuff on your way to the bathroom.

And if the whole Sea Hunt nostalgia isn't enough to float your boat, remember that this is the site where the original fort around Port Royal was built for the movie Pirates of the Caribbean, The Curse of the Black Pearl. The ship sailed all over this coast line, from Redondo Beach to Long Beach. Some shots of the Pearl appearing from behind a bluff are recognizably located in PV. Here's a picture from Steve Zepeda's MySpace page of the filming.