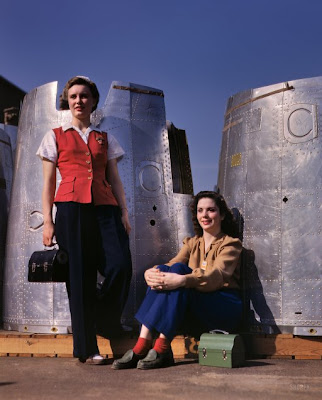 Another of those wonderful photos from Shorpy, this one taken at the Douglas Aircraft facility in Long Beach. Check out the army-green lunchbox!

The photo was taken in October 1942 by Alfred Palmer of the Office of War Information. The silvery backdrops are Nacelle parts of a heavy bomber--a new word for me. Nacelle means the covering of an airplane's engine, fuel or other equipment, separate from the fusilage.

I signed up for daily delivery of Shorpy photos a few months ago. One of the pleasures of my day is to pause in my ritual deletions of pharmacy ads, job and stock offerings, warnings from banks I have no accounts with, and ads from stores I've never shopped at, so that I can look at three or four pictures that capture a time I will never know. Sometimes Shorpy sends shots of Civil War soldiers relaxing or washing out clothes in a river, or street scenes of turn-of-the-century Washington DC, or 1950's Christmas photos taken in suburbia. You never know what you'll find there in their emails. 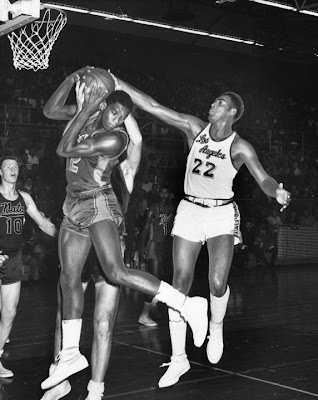 Before Staples Center opened in 1999, where did the Lakers play? The Great Western Forum, of course--but before that?

The Lakers moved to Los Angeles in 1960, becoming the NBA's first West Coast team. That was also the year they acquired Jerry West. In their last year in Minnesota, the Lakers were 25 and 50--which is, quite frankly, the reason they were able to get West in the draft.

According to the team's history webpage, Lakers owner Bob Short was inspired by the financial success of the Dodgers, who'd moved here from Brooklyn in 1958. In Los Angeles, the Lakers were 36-43, and got to the Western Division Finals. Here's the team in 1961--that's Elgin Baylor, blocking the shot of Joe Roberts, who played for the Syracuse Nationals.

The new Los Angeles Lakers played at the Sports Arena, because the Forum didn't open until late in 1967.

Bob Short sold his basketball team to Jack Kent Cooke in 1965, and it was Cooke who planned, developed and built the Fabulous Forum. Charles Luckman--who also designed the LAX Theme Building--was the architect. The Los Angeles Public Library has these fabulous picture in their Herald Examiner Collection. The one just below shows Luckman and Cooke during the construction--March 5, 1967. 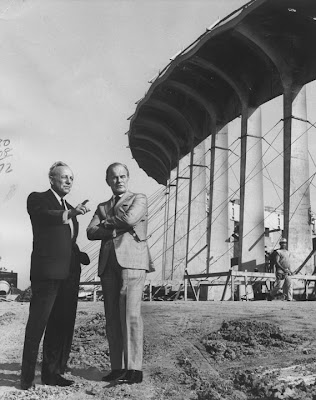 After fifteen months of work and $16 million, the building opened on December 30, 1967, a glorious event! Lorne Greene of Bonanza introduced Cooke to an opening night crowd of 14, 366 screaming fans. Harve Presnell sang the National Anthem. TV luminaries like Jim Backus (Thurston Howell III and Mr. Magoo) and Jack Palance (long before City Slickers and his one-handed pushups) were there, along with Broadway/movie stars like Janet Blair and Robert Morse.

But the home team lost! Dang. To the Philadelphia Flyers. Double dang. The home team in this case was not the Lakers, but Los Angeles Kings, a franchise started by Cooke and close to his heart.

The Sparks and Britney Spears are indirectly responsible for this post, btw. Thanks to a decided lack of faith combined with avarice, the Sparks are playing their third playoff game not at Staples, but at Pauley Pavilion, at UCLA. Why? Because Britney's Circus has booked Staples, and she draws a bigger crowd. Hometeam pride doesn't pay the bills, apparently.

But it did get me thinking about basketball venues. 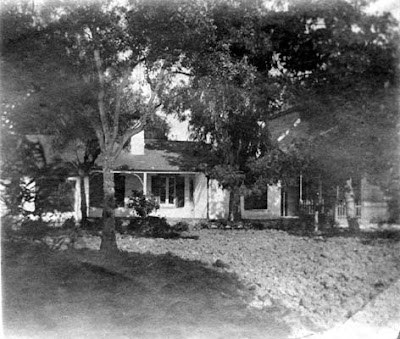 There's gonna be a fiesta in Westchester this Sunday, September 20: the Heritage of the Rancho Days. 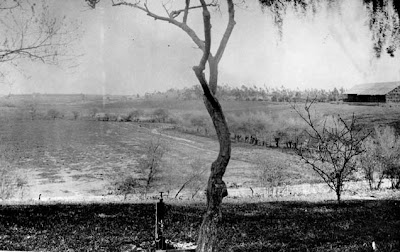 Did you know there are only 43 adobes left in the county? That's according to Wikipedia's entry on the Centinela Adobe. The undated picture above is from the Los Angeles Public Library, but what I find more amazing is this view from the Adobe, over the Rancho Aguaje del la Centinela Adobe, looking north to were the 405 is now.

The Adobe is near La Cienega. If you take 82nd St. east from Osage or Hindry, it goes left and turns into Midfield.

The Historical Society of Centinela Valley may be the only Historical Society in the area that hasn't got its own website yet. They do get a mention by the City of Inglewood on a page connected to the Centinela Adobe, and in these belt-tightening times (what a dumb expression, huh? Like any of us are getting thinner for lack of budget dollars.) it's not likely that the Society will get its own site in the near future. (Prove me wrong, please!)

Posted by Vickey Kall at 5:39 PM No comments: 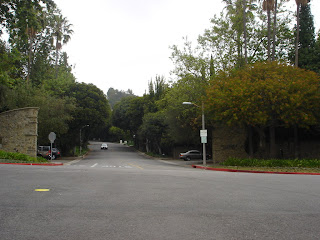 Trousdale Estates remained part of the Doheny Estate up until the 1950s--it was the northernmost part of the Doheny Ranch. The Los Angeles Times describes it as "sprawling view properties limited to single-level homes." That's not too limiting.

Trousdale Estates --that's the entrance on the left, picture from city-data--is the 425 acres where Greystone Mansion sits. It's now part of Beverly Hills. Paul Trousdale bought 410 of the acres in 1954, and began parceling off land to celebs, who built custom homes throughout the 50s and 60s. Celebs like Elvis, Frank, Dean, ... 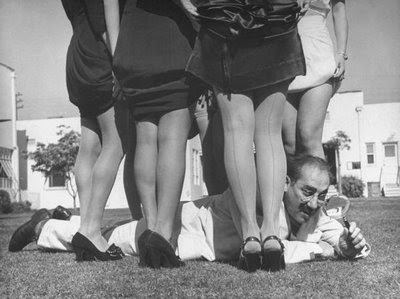 ...and Groucho . I can never ignore a Marx Brother in the news. Groucho's home, designed by Wallace Neff in 1956, is on the market for $12.9 million. The Times says it's "updated but maintains its Neff footprint." Yes, I understand (snort). I can hear Groucho saying, "At that price, there'd better be no footprints. And no handprints either."

Actually, he'd probably say something a lot more clever. The picture on the right, borrowed from Classic Television Showbiz , is from Life Magazine in 1960.

Here's the listing to his sparkling white, airy estate on Hillcrest.

I can't help but correct the Times on one point. It claims Groucho "shared the home with his third wife, actress Eden Hartford, until his death in 1977." Ummm, no. Eden and Groucho were ancient history by then. Groucho was living with Erin Fleming in his 80s, and that created quite a family scandal, if I remember.

I'm sorry, but isn't the idea of scandalizing the Marx Family a bit of a joke in itself?

BTW, Groucho's home is a real steal. Even on the one website (Hilton & Hyland Properties) there are several other celebrity-owned properties at much higher prices. Like Pickfair at $60 mil (I know; a shadow of its former self), or the King Vidor Estate for $19.95 mil. Nothing sells like knowing a long-dead famous person once sat in space kinda near your remodeled kitchen, right?

At St. Sophia's. I've blogged about the elaborate church before so I won't repeat myself (here's the link to my post). The site for the Greek Festival information is here, but turn your speakers down if you're at work. Unless you want everyone to think that Tom Hanks is in your cubicle.

However, Tasting Table LA came up with a new angle. They say that in 1986, to celebrate the opening of Zorba the Greek (Anthony Quinn in a touring company at the Pantages), a contest was held to find the best baklava in Los Angeles. Helen Zachario won that contest. What's the tie-in? Well, Helen's sister, Georgia Vasila, is leading this year's baklava-making crew at St. Sophia's this weekend.

They have the recipe for the baklava too. You can click here for the pdf, but if you go through the Tasting Table LA link, you get Georgia Vasili's tips for making it perfect. 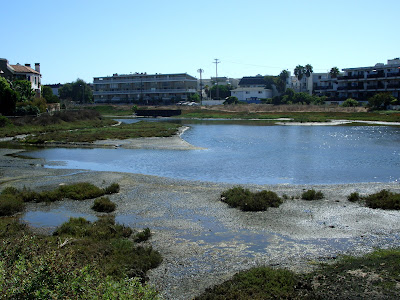 The signs describing the Ballona Lagoon are a bit ragged--ok, trashed--but it's still an oasis hinting at the olde days in the midst of constant construction. Take out the buildings (which I would have done, if I still owned a copy of Photoshop) (or, come to think of it, if I were God), and most of the area used to look like this.

Then Abbot Kinney came along, bless his heart. I'm not being sarcastic. Let's face it, someone was bound to develop the real estate as a playground, and at least Abbot Kinney had a kooky vision in mind. Venice of the Pacific. He put in the canals that still stand (and some that have vanished). 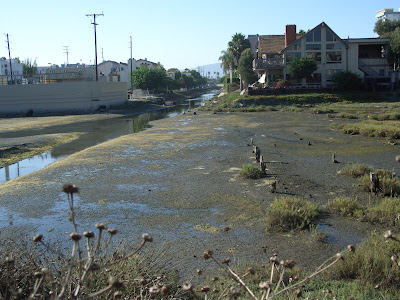 These pictures were taken on Labor Day Weekend, 2009, at low tide. Which means, around 5 or 6 in the afternoon, because the moon had been full, or just past full, the night before. This shot is looking north from the Lagoon along the Grand Canal, ultimately to Washington Blvd. Via Dolce is the next street to the right.

All these photos should become huge if you click on them.

into the Pacific, and that people have been camping around here for at least 8,000 years. From what I hear, it's still possible to catch halibut near shore.

These drawings show the place about 2000 years ago (a best scientific guess) and in 1861. They are brazenly copied from the site of Statistical Research, Inc. a company contracted by developers to provide "cultural research management."

From reading their website (which has lots of interesting historical information), I gather that they somehow protect the archaeological sites in the Ballona Wetlands, as well as the buildings from the days when Howard Hughes had his aircraft business here.

Hmmm. I really should be doing other work, but this is more fun. For those interested, 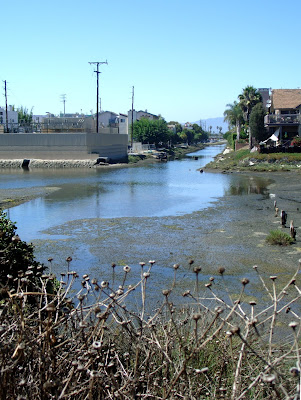 here's a link to a 1996 story in the Los Angeles Times about the problems facing the Ballona wetlands thirteen years ago--garbage, eroded banks along the canals, etc. Most of those problems have been addressed.

The Environmental Protection Agency says it awarded a $15,000 Five-Star grant for the restoration of this area. That's not that much, but other agencies--such as Heal the Bay, the Coastal Conservancy, and the City of Los Angeles Public Works--are also on board with funding. The project began years ago.

This is another shot of the canal looking north. I can point you to more pictures and text on the Adventures in La-la-land blog. The really gorgeous photos are here at California Photo Net. 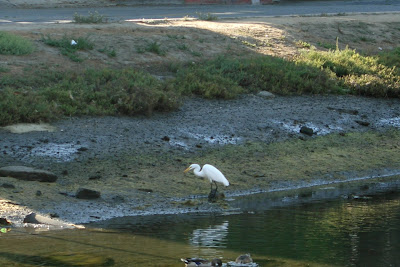 There are at least 60 species of water fowl that use this are. Besides the ducks that cruise the canals, I saw this great egret. I think. Great Egret is the name, not just me resorting to my favorite adjective. Snowy egrets have black beaks.

Birdwatching is one of the things I've always wished I had time for. Seriously. He's almost lost in this picture, but isn't he a remarkable creature?