Two Mondays in a row ... can you believe it? 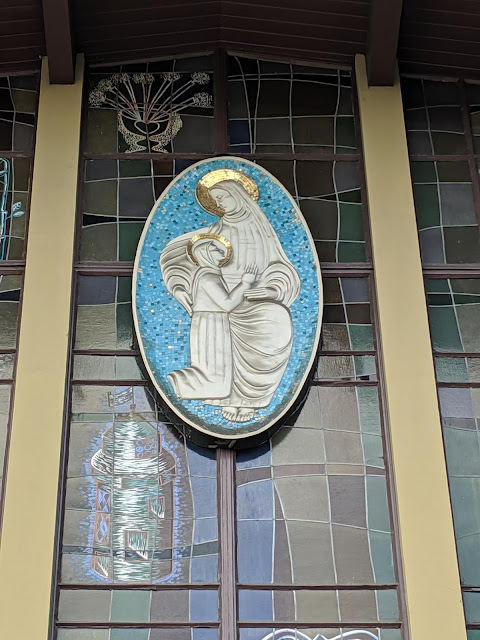 St. Catherine Laboure Cathoric Church is on Redondo Beach Blvd in Torrance, just off the 405. This weekend, they had a big Fiesta, and my friends called me to come and enjoy some lumpia and adobo and pancit ... yup, I jumped up and drove over.
And on my way to the Fiesta, I looked up and saw this mosaic.
I've blogged about this church, it's very modern window, and its inside mosaic before, but I'm afraid I haven't seen any information about this medallion-style mosaic. But it's purty.
And the adobo was delicious.
Posted by Vickey Kall at 12:00 AM No comments: 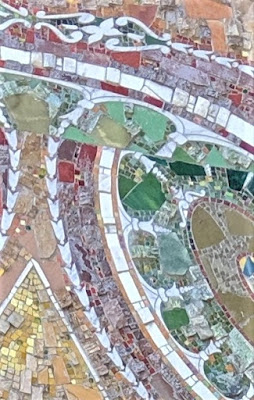 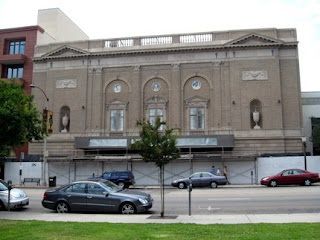 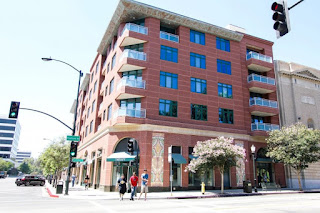 Love history? Me too.
Every three weeks I send out a newsletter with the top three history stories I've come across. The most recent newsletter went out Saturday (yesterday). You can take a look at it here.
What were the three top stories?

So go ahead and subscribe--the form is in the right right column. Every three weeks, and I always include one story (like the couch) on pop culture--stories I think anyone who reads this blog would enjoy. 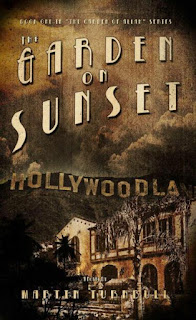 For those who love Hollywood history, a swan dive into Martin Turnbull's incredible collection of early Hollywood photos and ephemera could easily take up a few hours, or several days.
Turnbull is the author of the Garden of Allah novels that cover the famed Sunset Blvd.hotel from 1927 to 1959. Eight novels so far, with a ninth scheduled for publication this November. The first novel (right) starts in 1927 as fictional characters arrive at the Garden of Allah--characters that populate all the books.
Even if you're not looking for books to read, though, you might want to visit the website--just to look at the pictures. 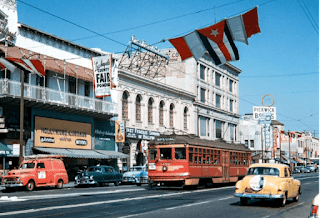 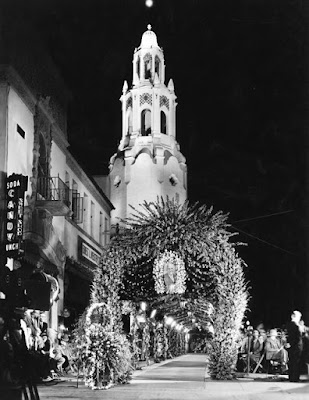 Seriously, there is everything here that you'd need to sink into a wild fantasy of life in Hollywood during its most exciting times. All you need is a glass of scotch and a sofa to stretch out on, and you're set. Go enjoy!
Posted by Vickey Kall at 12:16 AM No comments: 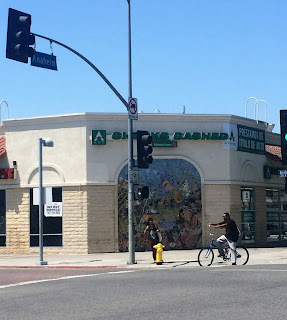 Yup. Driving down Anaheim Street and right at Avalon, I see this on the Southwest corner.

So of course I turn into the small plaza of shops on the corner. I avoided the pit bull and its owner (he seemed a lot meaner than the dog), and heard a bunch of cussing as a restaurant owner threw someone out for not buying anything. Cars were cutting people off. At the Chase ATM, young guys were cutting women with children off to get to the machines.

This was not an area filled with brotherly love and kindness.

I took some pictures, but have been unable to learn anything about this mosaic. It has an under-the-sea theme, but is not on any public art website that I've seen. 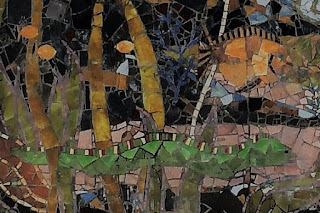 Here's a close up of sea critters in the kelp.  I thought there was a signature in the bottom right, but it was not anything I could read.

I would love it if someone could enlighten me. Who created this mosaic, and why is it there?

Here is the biggest photo, for your edification and enjoyment: 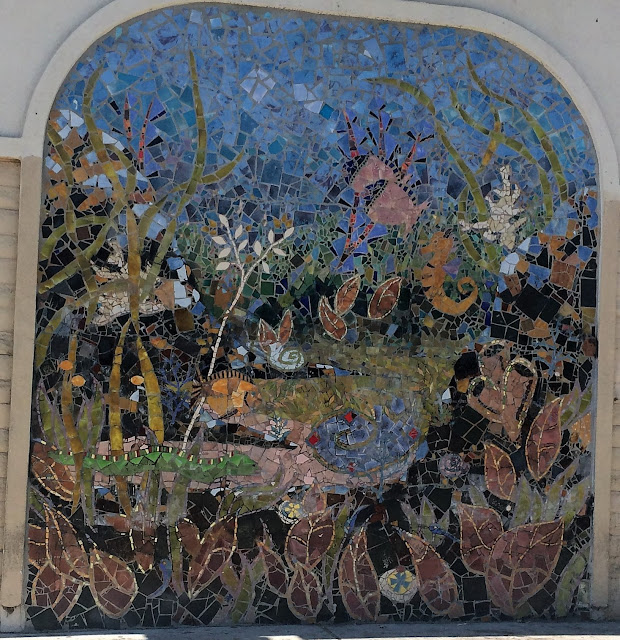 Posted by Vickey Kall at 8:33 PM No comments:

Can I get this posted in the next 27 minutes for Mosaic Monday?
Julie Bender is at it again. She's San Pedro's favorite mosaicist

But now ... along 25th Street, she's covering 2,000 square feet with a mosaic. Once again, she has the whole community involved!

Here are pictures I took last Wednesday or Thursday.  Bear in mind that it is a work in progress, not even half done: 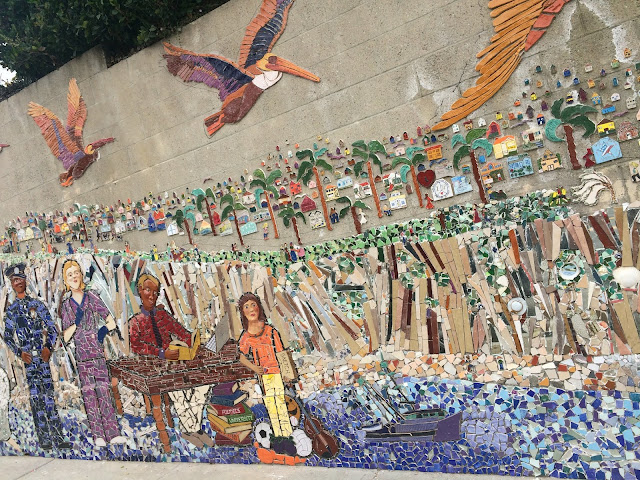 Of course there is a mermaid--along with police officer, baker, student ... 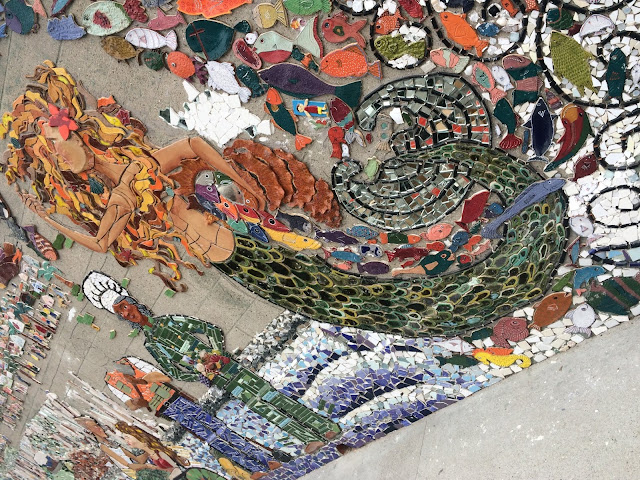 As well as dancing whales and an angel 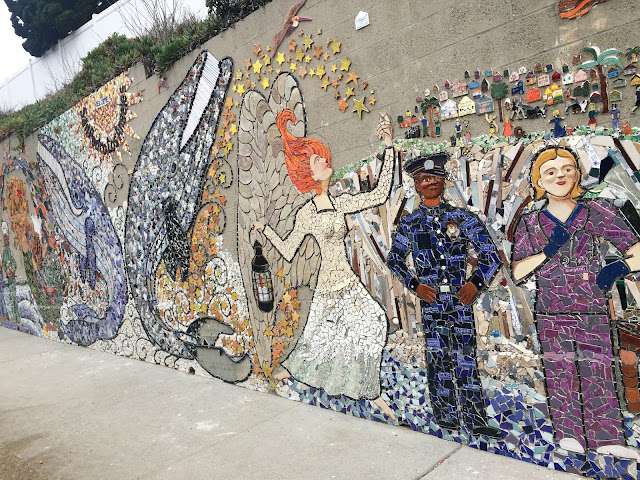 And a few local landmarks, like the Korean Friendship Bell (with soccer players at lower left) 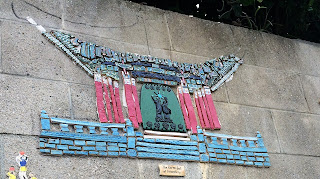 Have you been to the Bowl this year?

Here's what you're missing if you haven't been: 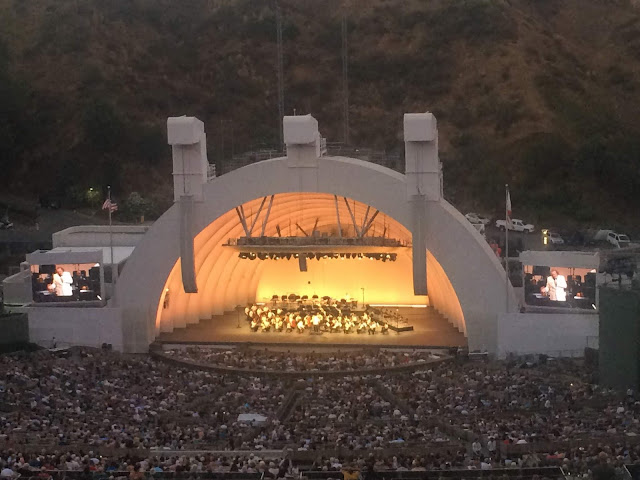 This was Tuesday night (July 24, 2018) around 8:15 or so. Moon rising behind us, still plenty of light out. A program of Sibelius followed by Ravel's Bolero. Beautiful evening, and the Park & Ride makes it so easy.
I blogged about the Hollywood Bowl Museum once,
The Bowl has it's own history up on its website, from its days as Bolton Canyon/Daisy Dell to the days of the sonotubes, then big balls on top, the Jazz Festivals, jumbotrons, and all up to the current 21st century singalongs. Lots of pictures.
Posted by Vickey Kall at 11:50 PM No comments:

At the northern end of Cabrillo Beach in San Pedro, there are private, fenced areas reserved for scouting camps, kids' kayaking lessons, and a Dragon Boat club (the long, white boat on the right).
Sunday morning was the perfect day for everyone. 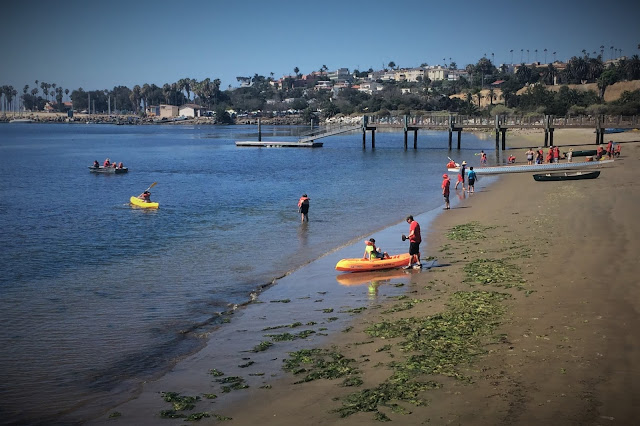 Posted by Vickey Kall at 1:06 PM No comments:

The LAist just published a piece about what the Los Angeles River might look like in 20 years, and the story was also on KPCC, if you'd rather listen than read. The author is KPCC's Susanne Whatley. And this beautiful picture (also on LAist) is by Steve Lyon and was on Flickr Creative Commons. AND, there's a 7-minute video of a drone flyover of the Taylor Yard (used to be Union Pacific property), which is along the east river bank where the river travels between the Silver Lake & Mt. Washington neighborhoods. Huge area, needs clean up, but it could be developed as a riverside park.

Thanks, Flo Selfman, (@floselfman) for tweeting this out to your followers!

Posted by Vickey Kall at 1:17 PM No comments: 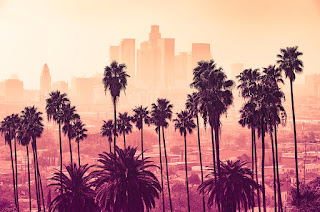 And in the past, I've blogged about eucalyptus trees in Los Angeles, and the trees of 1891. So today, I refer you to an excellent article about the history of palm trees in our city, by Dan Nosowitz in Atlas Obscura.

Nosowitz goes into a lot of detail about the palm trees, pointing out that they aren't even trees, really. They don't even have wood.

I've heard before that hundreds of palms were planted in advance of the 1932 Olympics here, and I just verified that on one of the history pages that Nathan Masters does for PBS, called "A Brief History of Palm Trees in Southern California." 25,000 trees planted in 1931! But according to Masters, beautifying the city for Olympics might have been a secondary reason. The program to plant palms back then was part of a larger program to put men to work. A $5 million bond helped pay for 40,000 palms in total. 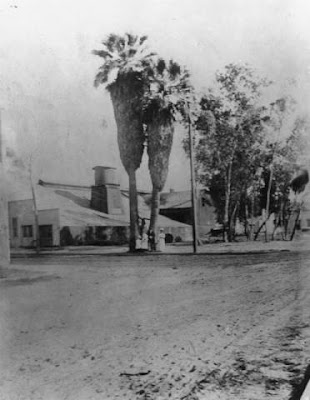 The PBS story gets the prize for best pictures, though. Go see. The image at right is from the Los Angeles Library, and is not dated. Nor does it note a location.

Garden Collage Magazine also chronicled the arrival of palm trees, back to Mission days, up through the '32 Olympics, and into the present. That's the one to read if you want a quicker overview.

Another palm tree story ran twelve years ago in the LAist and it claimed that 100 years ago, Los Angeles was full of pepper trees. Palm trees replaced them. Are pepper trees native? Because in Palos Verdes, which is still richly populated with pepper trees, folks call them invasive.

Well, I just learned (from another PBS/Nathan Masters piece) that our pepper trees are South American. From Peru, specifically, and they are ornamental. Hmmm ... they smell awfully peppery for ornamental purposes. But that'll be a story for another day.

Finally, a few months ago the Los Angeles Times reported on the mass die-off of our palm trees, with a great graphic that you should really go see: iconic movie scenes with disappearing palm trees.  The article lists the pests that endanger and kill our palms.

And many of these pieces interview one Jared Farmer, who wrote the book Trees in Paradise.
Posted by Vickey Kall at 10:19 PM No comments: