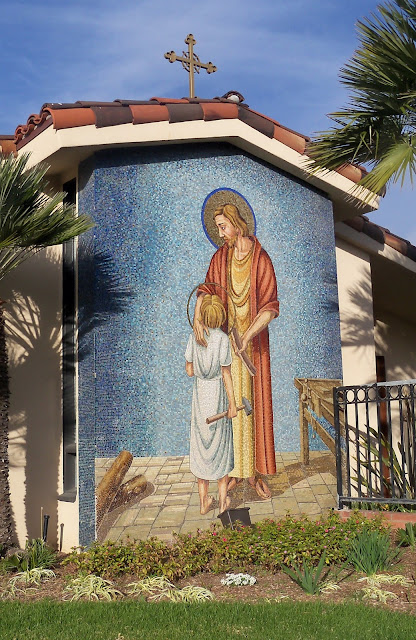 I've blogged about two mosaics at St. Lawrence Martyr Catholic Church in Redondo Beach before, most recently in 2010.

Anyway, this post shows a photo of the huge mosaics on the front of the church that faces Prospect Blvd.

This big (but not quite huge) mosaic of St. Joseph faces a driveway into the school grounds, and you have to glance right while driving north on Prospect to see it.

This mosaic sits on school property, which was once nine acres of sand dunes--until it was acquired by the brand new parish in 1955 (there were no church or school buildings at that point; Mass was being celebrated at a Knights of Columbus Hall on Avenue I). The school opened in September of 1956, with an average of sixty children per classroom.

The permanent church was dedicated eight and a half years later in 1965, presumably with the second huge mosaic.

As you might guess from the collection of facts in the previous two paragraphs, the parish of St. Lawrence Martyr has a history page up now, which didn't exist when I wrote my first, sparse blog post in 2009 which featured a photo of the mosaic of its patron saint.

The artist for that 1957 mosaic, turns out, was Hugo Ballin, and I'm glad to correct that record. Ballin was known as a muralist. I'm going to copy what part of what I wrote about him 15 months ago in yet another post: 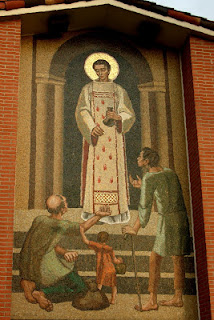 Hugo Ballin's story is interesting: he started working for Samuel Goldwyn when Goldwyn Pictures was based in New Jersey. A trained artist, he became an art director and production designer for Goldwyn. After following him out west, Ballin started to write and direct silent films and had his own production company.  Early, silent versions of Jane Eyre and Vanity Fair were among his films.

He returned to art in the late twenties, and you can see his work at:

He even designed the commemorative medallions for the 1932 Olympics, and he wrote a few novels too--at least one was quite controversial. When he died in 1956, he was said to be working on a 27-foot high panel for a Catholic Church in Redondo Beach. That may have been St. Lawrence Martyr, which was built in 1956. Ballin's work was only 1/3 done, though, so it was probably never installed.

Well, that last line proved to be dead wrong, didn't it?

SLM's history page doesn't tell me about either the new church mosaic or this third mosaic. I did walk up and look for a signature, with no luck. The detail of the mosaic is really lovely, though, so here is a photo showing the lower right corner, with the carpenter's tools and shadows. 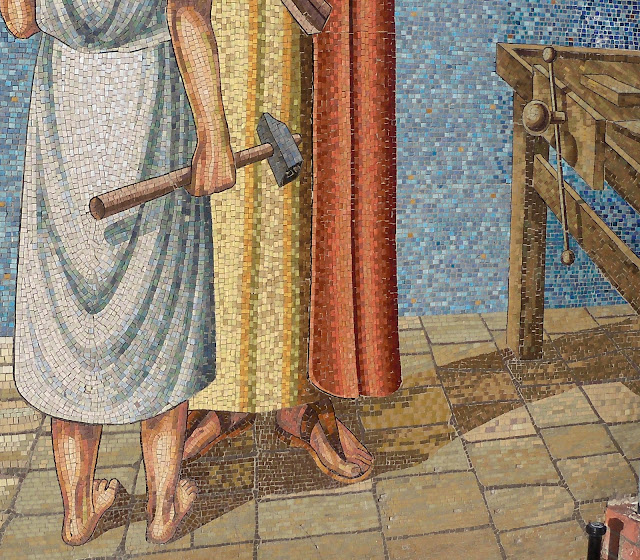 Posted by Vickey Kall at 2:45 PM No comments:

Here are some wonderful things to read, for when you have some free time: 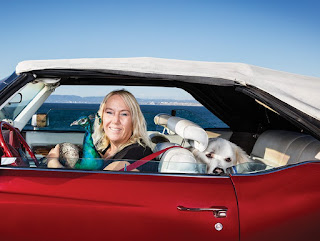 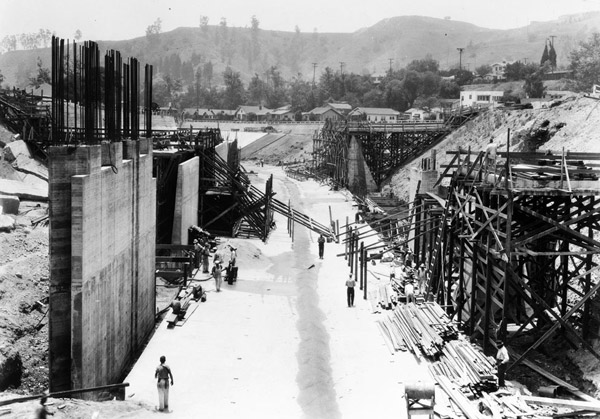 Posted by Vickey Kall at 7:07 PM No comments: 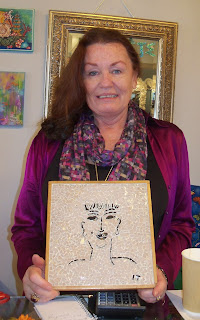 It is indeed a small world.

I toddled into Le Tete in Redondo Beach, a clothing, jewelry, and accessory store in the Riviera Village that carries a few books by local authors. A friend had advised me of this last fact, so I hoped that Stella, the owner, would display The Boomer Book of Christmas Memories

in the store. And she did!

But that's another story. This post is about mosaics.

The small world part comes when I entered. The store Le Tete is at 1911 S. Catalina, at the south end of that street, just blocks from the beach. It's a taller building than most on the street, with a large, fanciful, multi-color tree painted on the facade. On the side of the upper part of the building, you can still see the sign "Harmony Works"--that's the store that used to be there.

I walked over a mosaic in the doorway. Ah-ha! I had just revived my blog and was looking for new mosaics to photograph. However, this was just before Christmas and the store was busy.

Last week, when I returned with my camera to ask about the mosaic, Stella and I chatted. She pulled out a mosaic that she keeps in the jewelry display case and allowed me to take this picture of it and of her. 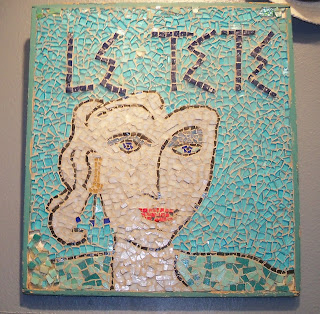 Stella showed me the other mosaics she had on the walls, and even in the back patio. All of them were made by her husband, artist and mosaicist Stefan LeTete.

When Stella showed me the small mosaics on the walls, and the one in the patio, she asked me if I knew about the Home Savings & Loan mosaics--she could not think of the name of the artist. When I said, "Millard Sheets," another customer jumped in. Millard Sheets has fans everywhere! We talked about his oil paintings, and the art gallery at the LA County Fair, which is now called the Millard Sheets Art Center. That's where an exhibition of Sheets' work was on display a few years ago, put together by his son, artist Tony Sheets. 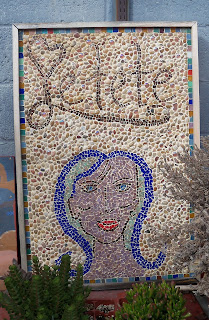 And as it turns out, Stella's husband Stefan LeTete drove out to Claremont decades ago to buy all the leftover tiles he could from the Millard Sheets Studios when that company closed down. Some of those tile pieces that he got from the Claremont studio so long ago--a studio that is today an optician's office--are in these mosaics that Stephan made for his wife's shop. 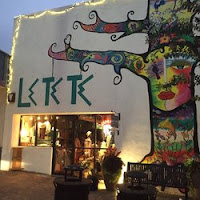 As for that Pique-Assiette mosaic in the doorway: A friend installed that about a year ago, but I got so distracted that I never learned more about it. 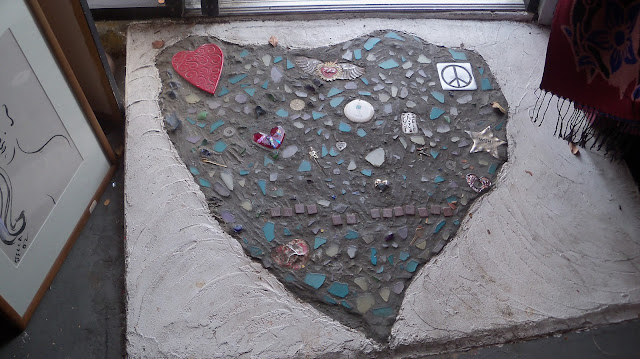 Posted by Vickey Kall at 8:05 PM No comments:

Did Home Savings & Loan have Temporary Mosaics for Banks?

The answer is yes, and here are two of them. 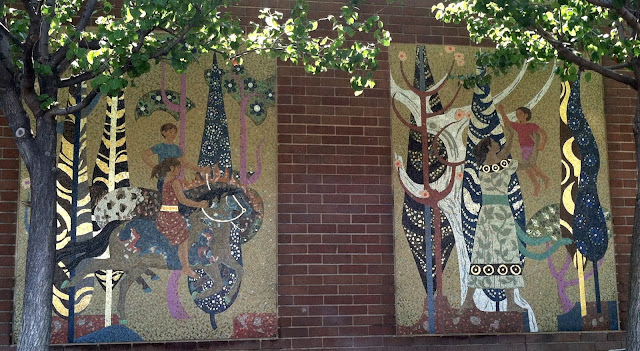 Professor Adam Arenson blogged about these in 2012, and for some reason I missed that post--even though he was kind enough to include link to this blog. I'm just going to highlight a few major points here, and you can go to his post to get all the details (and more pictures). 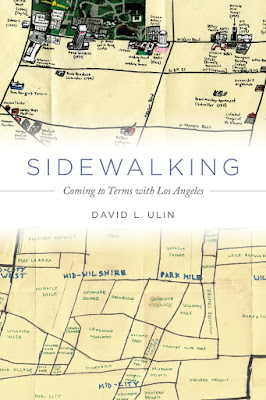 That's how David L. Ulin describes Los Angeles's streets in 9-1/2 minute interview on KPCC. He said, since we stopped using the streets as public space after WW2--using them instead as private spaces as we drove, enclosed in our cars, from one public space to another--our streets are "now a private space masquerading as a public space."

That's an intriguing concept to me. I got exposed to the idea of "public space"--a very strange idea to me at first--about 15 years ago when I met graduate students who were veering away from history to study Public Spaces in History: how designing a city or parks or streets actually shaped civic growth and culture, separating some groups from others or inviting them in. And of course, how those spaces changed over time, and what that meant about who was in control of the space.

If that subject intrigues you, there's a TED talk on it, given by Amanda Burden: "How public spaces make cities work."

Ulin also offers an essay called "Writing the City," which is basically a bunch of brief discussions on books about walking through cities, like Walker in the City, by Alfred Kazin. Which lead up to his contribution to the genre.

So I've made this my featured book. At $15 for the hardcover, it's quite a bargain, and since the book just came out in October it has few Amazon reviews.

And now I must go put in a request for the book from our library. Then I will review it.

Have I mentioned how important Amazon reviews are to authors? More reviews means more visibility. Please, please support authors you like by writing reviews, however brief, for their books!

Posted by Vickey Kall at 9:09 PM No comments: