Time for the Fair! 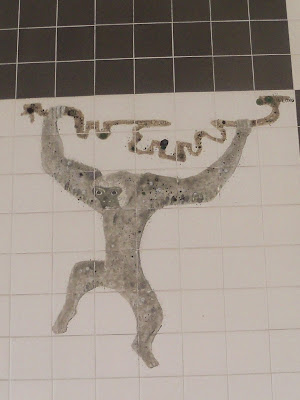 Since the Los Angeles County Fair is on (well, not today. The Fair is dark Monday and Tuesday), this Mosaic Monday post will focus on the delightful animals on the outside of the Fair's Millard Sheets Center for the Arts. Like this monkey...or gibbon.

The Fine Arts Building was one of several added to Fairplex in 1937 by the WPA--the Works Progress Administration. The same program that brought new post offices and murals to so many parts of the country, and pretty much created a style that--subliminally, at least--most Americans recognize and enjoy. And it put food on the table for a lot of craftsmen and construction workers.

(I'll let the historians left and right argue about how effective the program was in lowering the unemployment rate, which soared to around 25% in the 1930s. Whatever the WPA's effect on the Depression, the buildings and art it generated are part of our  collective culture now.) 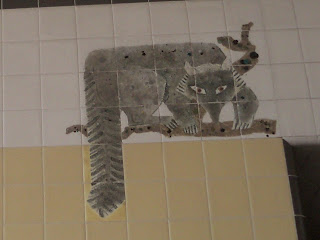 Anyway, we're still using the buildings erected then. The Fine Arts Building was renamed the Millard Sheets Center for the Arts in 2007. Millard Sheets, of course, is the artist responsible for these animals. ***error--see comments. Wayne Long is the name of the artist per Christy, and I will post a correction.*** Sheets operated the Fine Arts Building for years, as his son Tony--who says he practically grew up at the Fair--does now.

The Flower Garden and Clock Tower were not added until the early 1950s (I'm surprised; I thought they were older.) This year, the flower and plant arrangements and the gardens celebrate Mexico in a vivid display. Here's a teaser picture: 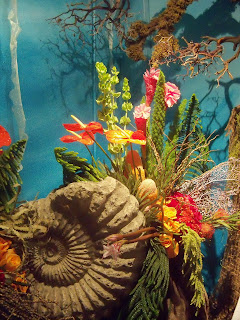 Back to the mosaics. The racoon above and the owls below, and several other critters, are on the exterior of the Millard Sheets Fine Arts Center and look down on a patio area. That's where--this year, at least--artists and artisans work while fairgoers watch and ask questions. Some of the artists are very well-known and have been involved with the Fair for years. Beside those on the patio, others inside the Fine Arts Building in various nooks are also sculpting, brushing and carving, working with canvas, paper, glass, wood, clay and fabric, showing us all how art is made.

And all this is background. The exhibit is actually about Three Centuries of Artistic Innovation, with displays showing--for example--how printing developed over the years. Or photography. Or what steam power allowed us to invent. The exhibit demonstrates, over and over, how one brainstorm led to another and another, each building on previous ideas. Read how it all came together here. 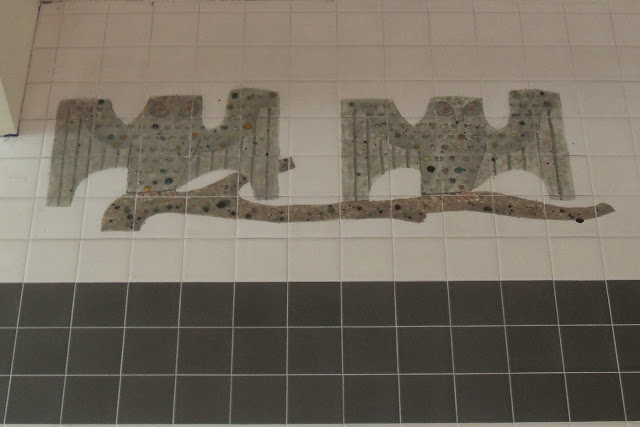 Since I completely missed Mosaic Monday this week, I will instead post photos of about one-third of  Millard Sheets' Rose Parade Mural that used to sit in the Pasadena Home Savings and Loan/Washington Mutual/Chase Bank. 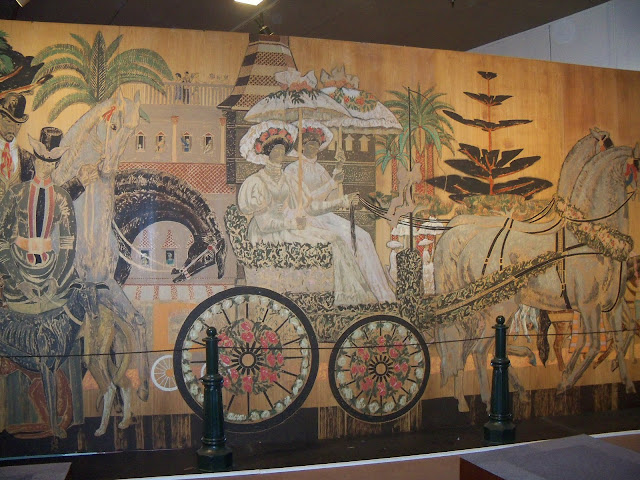 I once repeated the story that Chase Bank was about to paint over the mural--that was not true. But they were remodeling the Pasadena branch lobby, so the artist's son removed the mural and will soon be installing it in a new home in Pasadena, where we can view it in all its glory. 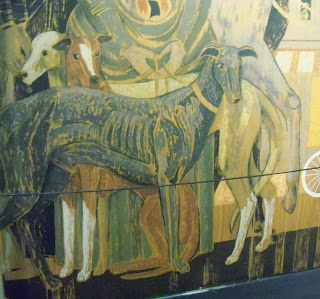 Tony Sheets, who is Director of the Fine Arts Gallery (actually, the Millard Sheets Fine Arts Gallery) at the Los Angeles County Fair, has this portion of the mural on display at the Gallery.

The walnut panels have lightened over the years. The grayish shadows on people's faces were once much lighter than the wood, and so created realistic faces--but now, with the wood lighter than the paint, the effect is almost like looking at a photo negative. Here's a close-up of the dogs, cause I like dogs. 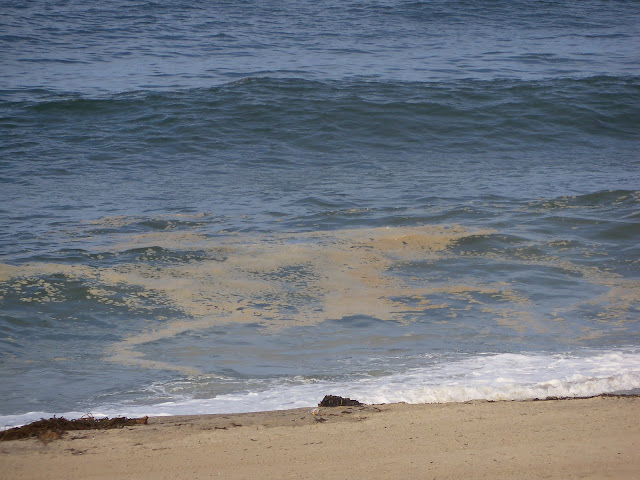 Sorry, I know this is supposed to be history. But these photos were taken around 9am Sept. 22, 2010, just south of the Redondo Beach pier. What is the crud washing into shore? 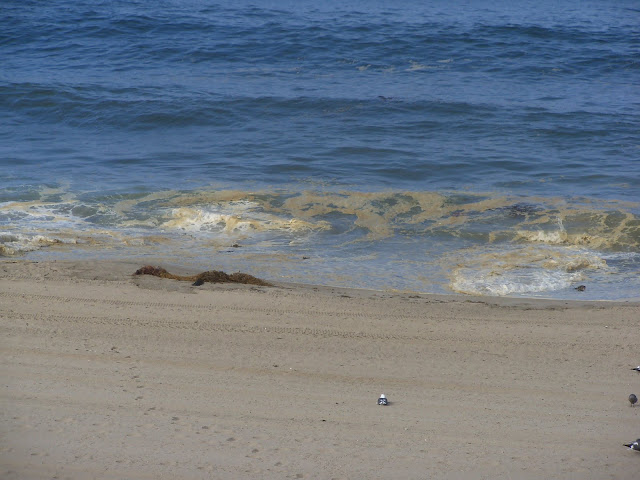 There were big patches of it all over, whatever it is. And NO ONE was in the water.  I see nothing in the Daily Breeze; nothing on Patch.com.  What is this crud? 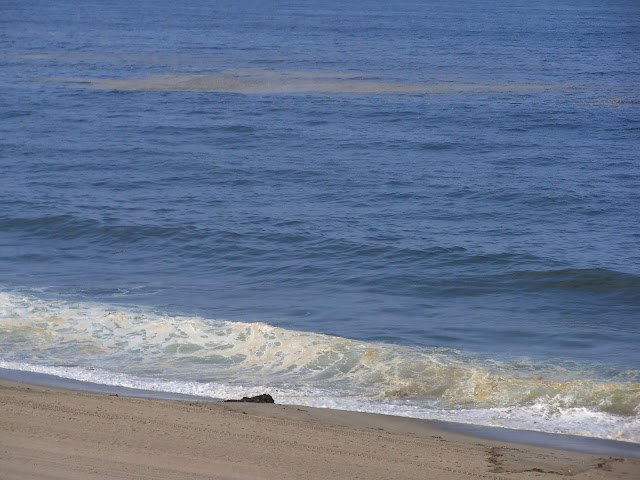 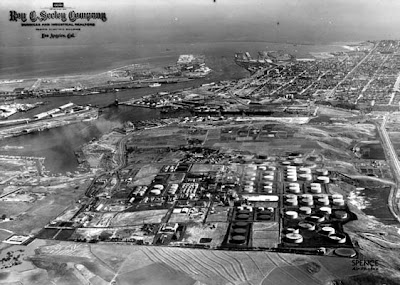 The November 2010 issue of Air & Space Magazine features my article on Robert Spence and Spence Air Photos, complete with a 1921 oblique air photo of the Venice Pier. Not to steal their thunder, I'll add another of Robert Spence's pictures (he took over a hundred thousand, btw), this one from the Los Angeles Public Library collection. A 1939 photo of the Los Angeles Harbor looking south, with the Union Oil refinery in Wilmington in the foreground.

Spence began photographing Los Angeles from the air in 1919 and didn't stop till he retired in the early 1970s.

Of course, his collection--housed at UCLA's Geography Dept's Benjamin and Gladys Thomas Air Photo Archives--includes shots from other locales too: Disneyland as it was being built, the St. Francis Dam disaster a day after the dam collapsed, the "new" Golden Gate Bridge in San Francisco, Hoover Dam (now Boulder Dam), and even (I think) some wartime shots taken over Burma during WWII. Fascinating legacy. He just hung out of the plane with a camera that weighed half as much as he did (at least in the early days) and shot!

The artist is Livio Napolitani, whose work graces another librairies in Los Angeles County (Gardena) that I'll get to another week.

The trees in each mosaic symbolize human ignorance, according to the LA County Arts Website--a great resource for locating public art in Los Angeles. 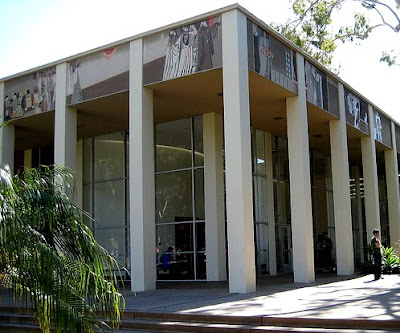 So I'm watching an old episode of Star Trek (yes, that's redundant) on PBS the other night, and up pops the UCLA's Schoenberg Hall. Just for a second, after Captain Kirk points and says, "My brother works over there."

And suddenly, there's a pale color still of Schoenberg, with all those mosaics at top. I blogged about them (the mosaics) last April.  The mosaic "The History of Music,"  by Richard Haines, is quite clear.  Got too admit, it took me awhile to figure this out--but I'm pretty sure that the still used in Star Trek is a reversed or mirror image. Strange, huh?

Anyway, back to Star Trek. The episode was from the first season and is titled "Operation: Annihilate!" Here's a link to it on Youtube--the building shows up between 7:55 and 8 minutes in.

Most of that scene had been filmed at TRW's Space Park in Redondo Beach, which is now owned by Northrup Grumman. That's not the only time Space Park was used in a Star Trek storyline. Remember tribbles? Part of that episode was filmed at TRW's employee cafeteria.

The 110 acres of land for Space Park was purchased from the Santa Fe RR in 1960 by STL (Space Technology Labs--a division of TRW), and ground was broken for the office complex in December. It still exists, but I heard that the cafeteria and other buildings featured in Star Trek have been replaced by newer structures. If anyone knows more, I'd like to hear about it. Because people who watch Star Trek on PBS thrive on trivia.

Wells Fargo Mosaic to be Restored 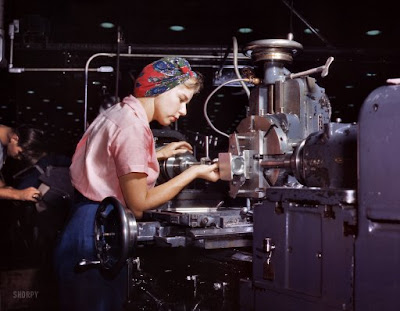 Newsflash: I blogged about the mosaic by Susan Hertel in Redondo Beach in a previous post. Now I can announce that it's going to be repaired and restored by Wells Fargo--just because I asked! Woo-hoo! Read the story on Patch, here.

Which has nothing to do with the lovely Kodachrome photo at left, taken by Alfred Palmer of the Office of War Information in October 1942. The shot of a woman working at the Douglas Aircraft Plant in Long Beach was reproduced on Shorpy.com. 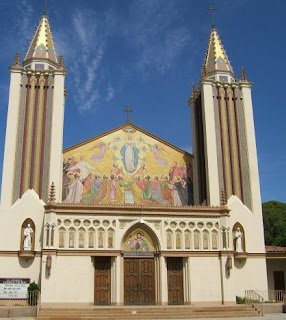 Today's mosaic rests on the front of St. Anthony's Catholic Church in Long Beach. The parish was founded in 1904, but the first building is long gone. It was a "handsome little church," according to the Los Angeles Times, and seated about 300 people. A priest from nearby Wilmington, Rev. Ramon Ferrar, served the Long Beach community in those early days.

A second, larger church, built in 1913, held double the number people that the first chuch did, and cost $65,000 to build. That church was damaged during the 1933 earthquake, and was replaced with the church that stands today.

THe mosaic was not added until 1954--a Golden Anniversary present to the parish.

The mosaic is actually several mosaics. In the center of the main panel is the Assumption of Mary, mother of Jesus. The apostles gaze at her as she rises into heaven, but there are some modern figures watching too. Pope Pius XII is the man in white with his arms outstretched. Cardinal McIntyre, Bishop Manning, and other church leaders from the LA area are on either side of Mary, above the apostles. 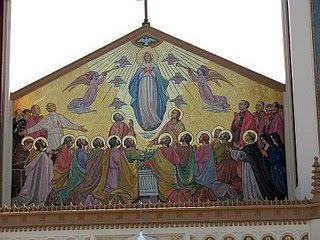 Below them all, right over the church door, is Jesus, and twelve panels below him on either side show the patron saints of twelve other Long Beach parishes that sprouted up in the fifty years after St. Anthony's was established: St. Bartholomew, St. Matthew, Holy Innocents, etc.

According to a story in the Times from September 1954,the mosaic is based on a painting by Borgognone in Milan, Italy in the Brera Gallery. The mosaic's artist, sadly, is not credited.

In an online writing group, a recent thread wanted fantastical answers to the question, "What would you do if you won the lottery?"

Answers were predictably cavalier: hire a 24/7 chauffeur and/or hairdresser, keep a penguin colony in the basement, buy a sports team. A couple of good souls brought up causes and give-backs, bless them. But an LA Times article has answered the query for me. If I hit the lottery, I'd buy Ennis House. (I'd opt for the 24/7 chauffeur too because parking and traffic would be murder.) 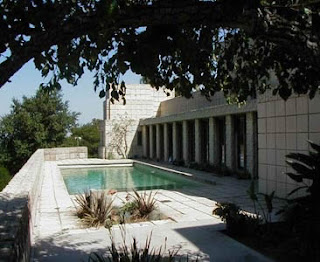 Yup, Ennis House is for sale. In case anyone missed the glut of stories over the last week, a couple of Frank Lloyd Wright homes, as well as livable sites by Shindler and others, have been on the market for months. Prices have been cut to the bare bone--did you know you could pick up a 1937 Richard Neutra condo for $675,000?

Now that impressed me. It's one thing to hear that the Ennis House price has been slashed--slashed--from $15 million to $8 million. $8 million might as well be a million gazillion to me. But $675,000, while not a number I can afford, is at least something I can wrap my head around.

The condo is one of the Strathmore Apartments at 11005 Strathmore, in case you're interested and in a slightly better financial situation than myself. Orson Welles once lived there. Check it out here.

Posted by Vickey Kall at 2:21 AM No comments: