2018 Festival of Books from the Los Angeles Times

Real quick--so that I can reach one or two people who might attend tomorrow:
The Los Angeles Times Festival of Books is going on now on the USC Campus.
The weather is beautiful over downtown Los Angeles, which means that by 2 pm the Festival walkways are thick with attendees. Go early! It's so worth it.
Today I caught a 10:30 am program: The Environment on the Precipice, moderated by UCLA History professor Teofilo Ruiz.
Dr. Lucy Jones was on the panel. You know her if you've ever watched the news after an earthquake in Los Angeles. She was the one who calmed us all down while telling us that, yes, the big one is coming. Dr. Jones has a new book out: The Big Ones: How Natural Disasters Have Shaped Us (And What We Can Do About Them).
Dan Egan was another panelist, and just last night his book The Death and Life of the Great Lakes was awarded an LA Times Book Prize in History.
Lastly, Edward Struzik, author of Firestorm: How Wildfire Will Shape Our Future, rounded out a panel that, as Dr. Teo pointed out, hit fire, water, earth, and air (since Lucy Jones's book deals with tornadoes and all manner of disasters).
Dr. Jones stated that we are all terrified of the random, so we force patterns on natural events and convince ourselves that they can be predicted and avoided. We've been doing that for millennia. But we're deceiving ourselves. This was echoed by other panelists, especially Struzik, who reported that fires of a certain size can't be stopped, and they will become more frequent.
A change in attitude is needed. We cannot keep rebuilding in the same place after every disaster. One audience member lost her home in the Thomas fire and is trying to wade through the complexity of the new building codes she now must conform to.
But should we be rebuilding, especially on fault lines, in flood zones? That's a shift in thinking that we have to get through. Hazards, Lucy Jones said, are inevitable. Disasters are not.
In the afternoon, Steve Lopez hosted a panel on homelessness, discussing the reasons for in (evictions, most recently, but also dumping from prisons, hospitals, rising prices, job loss, and much more), and what can be done.
Two fascinating panels among many, and there's a whole 'nother day of it tomorrow.
Go!
Posted by Vickey Kall at 6:20 PM No comments: 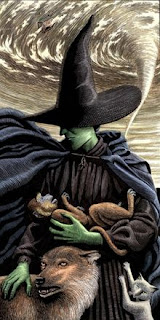 I've always been curious about the Throop church building in Pasadena because it reminded me of the Wicked Witch’s hereditary title in Wicked: The Life and Times of the WIckedWitch of the West: The Eminent Thropp.
But of course the Throop Church, double o, has nothing to do with the Wicked Witch’s family title, double p.
I did not realize that the Universalist Church in America went back to the 18th century, but it does.
The Throop Memorial Church has always been a Universalist church. Like most Universalist churches, in the early 1960s it became a Unitarian-Universalist Church.
The Throop Memorial Church we see today at 300 S. Los Robles actually started out a few blocks away, as the First Universalist Church. It was built at Raymond and Chestnut in 1890 so it could serve the small community of Universalists that had been meeting for four years in various locations.
Even though that first church was lovely (as you can see below left), the congregation decided to build a new church. In 1923 the Throop Memorial Church--the one we see today--was built on the corner of Los Robles and Del Mar. 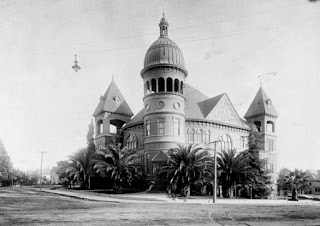 Why call it Throop?
One of the community, Amos G. Throop, was a businessman from Chicago and he apparently led the efforts to build a church, contributing money for the land and building. Throop also founded Polytechnic University a year later, which became CalTech (in fact, before 1920 the school was called Throop Polytechnic or Throop University). The year after that he became Mayor of Pasadena. He died shortly after that, in 1894.
Below right is the Throop Memorial Church today--the building that opened in 1923. 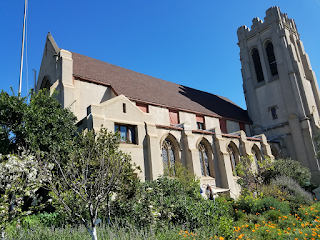 The original Universalist church at Raymond and Chestnut? Gone.
But there is a church on one of the corners there: St. Andrews Catholic Church, with its tall, campanile bell tower. The original St. Andrew's was built in 1886, so it was already there when the First Universalist Church went up in 1890 ... but that original church is also gone.
St. Andrews was rebuilt in its original location, though, even though the name isn’t so cute. (Don’t you think Throop is a cute name?) The Catholic church was completely rebuilt in 1927-1928 at a cost of ONE MILLION DOLLARS. In 1927-pre-Depression money. 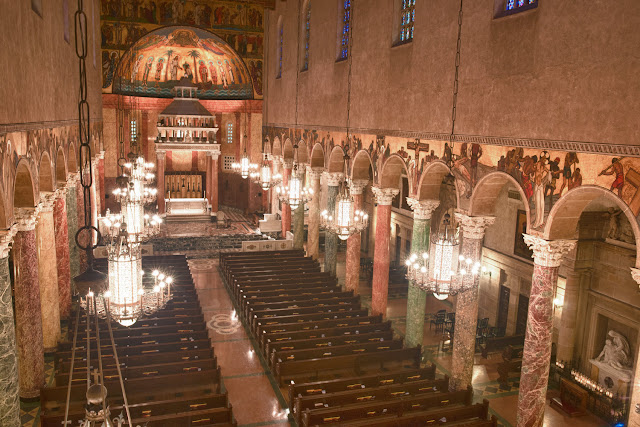 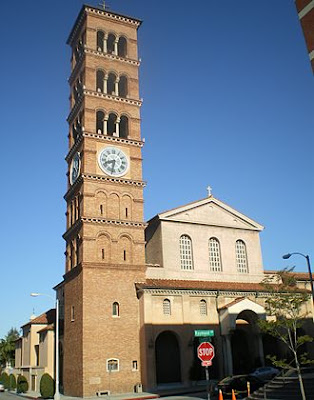 The interior design of the new St. Andrew's was inspired by a Byzantine Church, Santa Sabina’s Basilica in Rome--and that church goes back to the 5th century. The pillars in Pasadena are of scagliola, which I believe is an imitation, colored stone/stucco, and they imitate the real marble columns of Santa Sabina in placement and number.
If you look up Santa Sabina, you’ll see that the columns there are fluted. Before the 5th century church was built, those columns were part of a temple to Juno, and they were reused for the Basilica.
The Pasadena columns are much more colorful. Imitation, shimitation. You can see them well above. Scagliola is used in Buckingham Palace, so it’s not like it’s a low-cost knockoff or anything.
The exterior of the new church copied another Roman church, Santa Maria in Cosmedin, built in 1123. There are minor differences--the original bell tower has six levels of arches holding bells, for instance--but you'd recognize that tower.

I’m still a nut about mosaics, and  this church has a mosaic floor design repeated on the aisles (left). On the walls are other works of art: murals. Carlo Wostry was the artist, an Italian who seemed to move everywhere in Europe in then to America, creating sacred-themed art.
The murals inside St. Andrew's took eight years to complete. In spite of the Depression, parishioners were willing to keep paying and expanding the artist's commission from just painting murals above the altar to adding saints' portraits and Stations of the Cross to decorate the church. Some of the Stations were completed in the artist's home of Trieste and exhibited there, before being boxed up and shipped to Pasadena and installed in St. Andrew's. 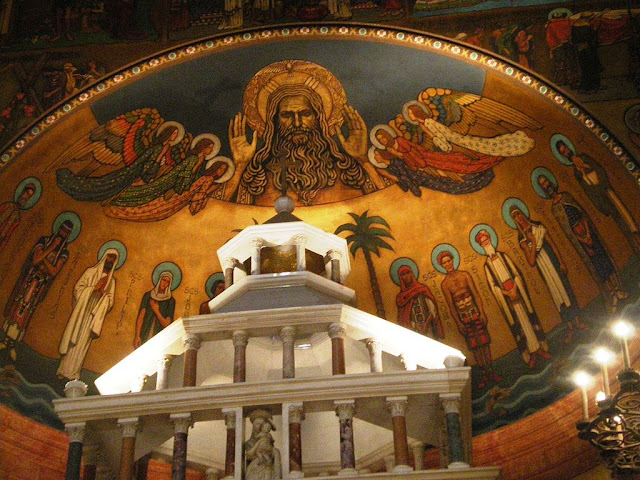 Posted by Vickey Kall at 2:48 PM No comments:

This doesn't have much to do with history, but I'll put it in anyway. Maybe in a bit this place will become iconic. Maybe it is already, because from the outside, this home is as stunning as the Case Study home of 60+ years ago. 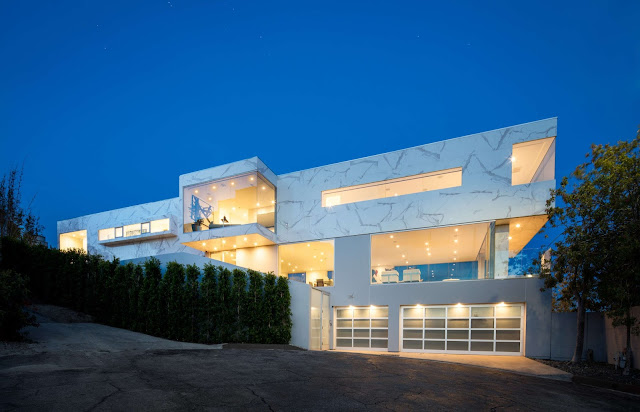 The home on the Sunset Strip (home doesn't seem the right word. Luxury living space?) is for sale at $18.5 million.
Usually I roll my eyes at such properties and move on. Bungalows built in the 1920s or classic homes designed by Paul Williams are more interesting and accessible, and have such personalities and tales attached, often with movie star tie-ins.
But the photo of this place on Blue Jay Way is arresting and stopped me in my internet-strolling tracks. You can see more pictures here. 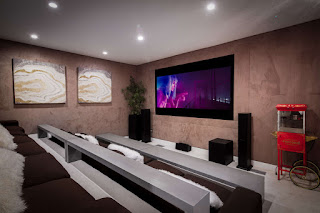 The interiors? Mostly white in flat or shiny textures, ornamented with large sheets of glass.
Not my cup o' tea and I've spent a few pleasant moments imagining the place with stacks of books and unread mail, a broom in the corner, hand prints all over the glass surfaces, and shopping bags of things not put away yet. Yeah, This is the reason I don't live in a pristine palace. In fact, in all those pictures, the only article of furniture I could relate to was the popcorn maker in the movie room, which probably never gets used because that would result in, you know, mess.
Posted by Vickey Kall at 11:14 AM No comments:

Walked all around the Ports O Call Village, which is in the process of going away. That's a Good or a Bad Thing, depending on who you talk to. I hope for the best, because quite honestly it had become a shabby remnant of itself in the last couple of ... decades. The Ports O Call Restaurant is still open and fighting to remain so.
The latest news story about last week's meeting at the Grand Theatre, revealing new drawings, is here.
Packed house. The new drawings don't thrill me, but since developments never turn out looking much like their original renderings, should I worry? Maybe. Those girders are going to look weathered very quickly, I fear. 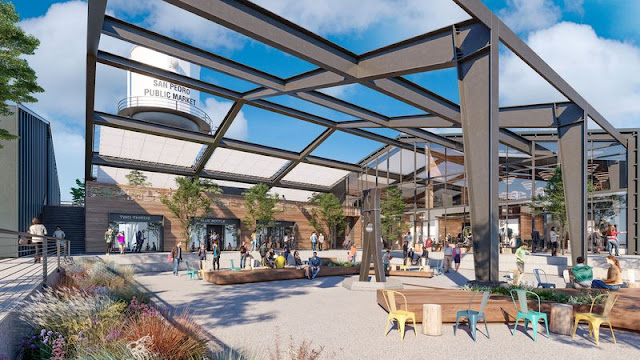 However, this post is about the night herons that perch near the fishing boats, just south of Ports O Call Village. And here they are: Night herons in the mist, if you will. 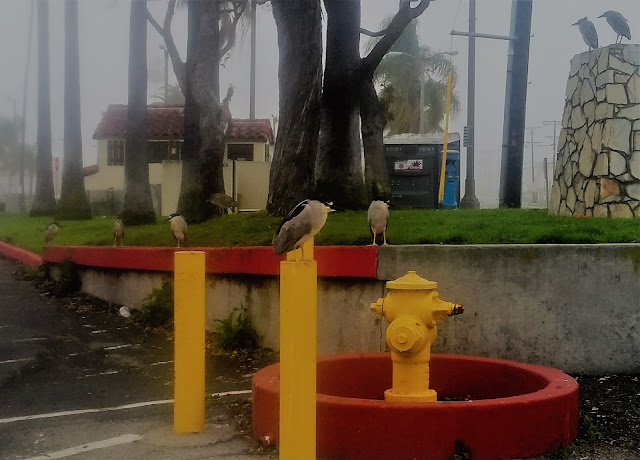 Posted by Vickey Kall at 9:20 PM No comments: