In 2013, KCET celebrated the June 24th birthday of artist Millard Sheets by listing ten of his best-known, best-loved pieces of public art. They weren't all in California.

Which gives me a great excuse to show this picture of Touchdown Jesus at Notre Dame in Indiana. 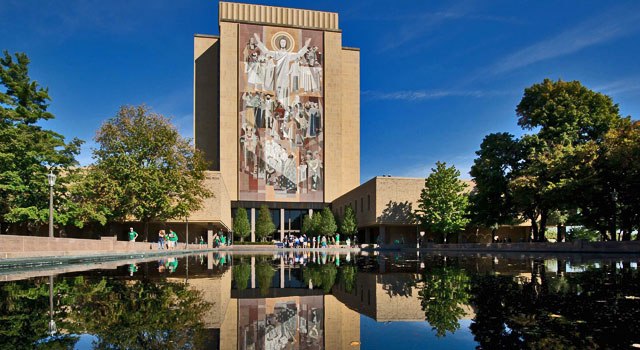 This is on the library at the school, and this article gives a pretty detailed history of how it came to be.


Back to KCET's celebratory piece by Ed Fuentes.

The list includes the Millard Sheets Studio, now an optometrist's office in Claremont, the Beverly Hills branch of Home Savings and Loan, which was not the first collaboration with Howard Ahmenson. But it is the earliest example of Sheets' work for Ahmenson that's still standing.

There are installations in Detroit, in Lubbock, TX, San Francisco, and Washington DC. Home S&L banks in the OC as well as the beautiful Hollywood branch.

Counting down to #1: What do you think? Since KCET is local, they named "Your Local Artwork" as the Number One site, and ran this picture of a mosaic in Riverside. The photo is by Bebe Kropko: 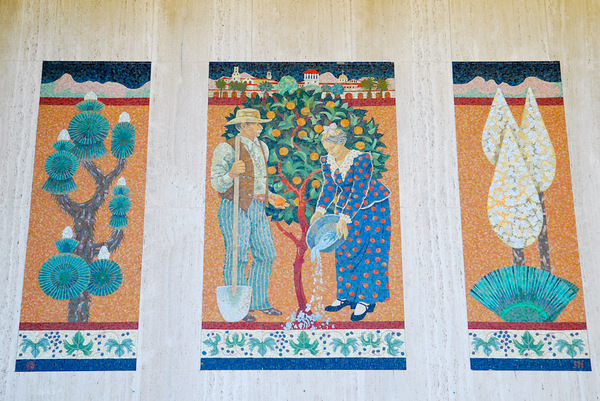 Sunday Reading: How LA's Boulevards Compare to Other Cities', and What That Means 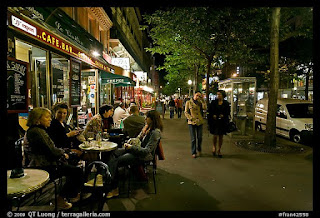 Banking and business districts can be very forbidding, for example. Even the public art is cold and uninviting. I can feel excluded, as if I were being told to move on. There is no place to linger and enjoy the view outside most of those huge buildings.

They and their streets "create an interesting visual panorama, one as aggressively functional as an oil refinery."

That quote is from the article I link to, a few paragraphs down.

Makes you speculate on why. Why do those big banks make their buildings so impersonal, cold, and exclusive?

When you look at a city's public space -- even an ancient city -- you can learn things about the culture you might not have known. 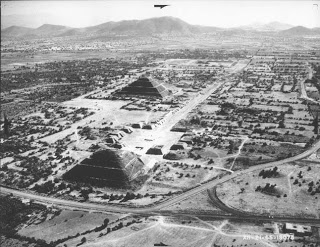 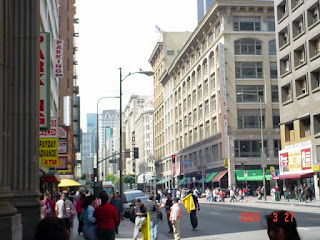 Which is why a very long article by Doug Suisman in Boom California has captured my attention, but I've had to read it in bursts, as if it had different chapters.

Suisman is an architect and urban designer. In this piece he examines all the different cities he's lived in, from his Hartford, CT childhood to Europe to NYC to LA, where he lives now. And he examines each as a part of his education, and tells us what he learned from the places and the way they were laid out.

In Los Angeles over 30 years ago, he finds a city made by engineers, and yet as you look down the residential streets you find colonnades of stately trees. Through the 1980s and 90s and into the 21st century, Suisman tracks the changes along our streets as his own architectural firm was involved involved in the transformations. Global climate change, terrorism threats, economic ups and downs, gas prices, and many other factors all play a role in how lively our streets are, and how we enjoy them -- or not.

I'd never heard of such a thing as studying and manipulating public space till 15 years ago. It's possible that in 30 years from now, all this speculation will be old hat.

But for now, Suisman's ideas make a great read for a hot Sunday.

Posted by Vickey Kall at 5:16 PM No comments: 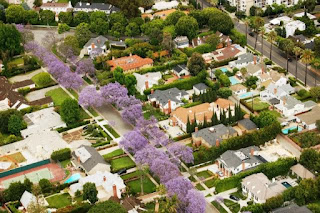 Love 'em or hate 'em? Jacaranda Trees are enchanting and messy, and Julia Weck goes into great depth on them in this LAist article.

I knew that one 19th century gardener in San Diego had been responsible for planting hundreds of the trees, but I did not know there were 49 species, that there were 148,530 in 2010 (oh, come on! Someone counted them?) and that no two trees flower on exactly the same schedule.

Weck goes through the entire history of jacarandas in Southern California. Read this and astound your friends the next time someone starts whining about "those damn purple flowers" that stick to your car. You will be a fountain of knowledge about jacarandas. The only thing that Weck fails to mention is the fact that the seed pods make great pretend hand grenades for 10-year-olds. Trust me on that.

The Port of Los Angeles is in the Smithsonian. Yup, my favorite magazine wants to know if we can really meet our goal of having a zero-emission freight service by 2050. Did you know that POLA has decreased particulate emissions by 83% since 2005? The article lists the ways we accomplished that, then goes into future plans. We are pretty impressive. 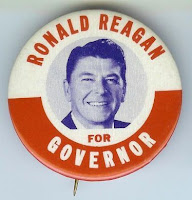 This month marks the 50th anniversary of Ronald Reagan's rise to power as California's governor, since it was 50 years ago on June 7th that he clinched the Republican nomination for that office. He went on to defeat Pat Brown, the father of Jerry Brown. Those were turbulent times.

The UC Berkeley News published a retrospective back in 2004, on the occasion of Ronald Reagan's death. It is interesting to read, even now, 12 years later. The article looked at Reagan and how he targeted that University and its student protesters to present himself as the defender of law and order. This was the very beginning of student demonstrations against the Viet Nam War, and those actions horrified most folks back then. Demonstrate against our own government? Were those kids crazy?

Those were emotional times, too, with right and left as polarized as they are today--though along different lines. Reading about it with an added 40 years of perspective was enlightening.

Tracking coyotes through the number of sightings in city neighborhoods. You'd think there would be a database somewhere, right? Depends. I think the city of Claremont was doing that a dozen years ago, but Los Angeles and the South Bay are just now getting on the bandwagon. In this Daily Breeze article, one expert scolds, "This needed to be done five years ago, not now." 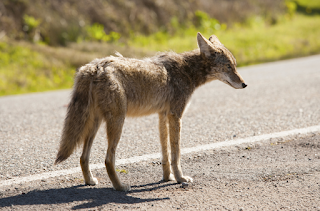 According to the Breeze, no one knows how big the coyote population was in 2000, or 2008, or now. There's no data, just dozens of sightings. We didn't even keep records on coyote attacks on humans till 2011.

I live next to a canyon, where the first lone coyote was spotted over a year ago. Predictably (in retrospect), he invited his friends and now we have families of coyotes prowling our parking lots at night. Cats have gone missing. Those of us with dogs thing twice before walking them after dark.

The article is mostly based on information from one expert, Niamh Quinn. Coyote behavior, city responses (or lack thereof) and what we can expect in future are topics covered.

However, LACurbed points to a map from KCET showing that someone HAS been keeping track of coyote reports. KCET's map is from the Urban Wildlands Group, color-coded by year. I clicked on some dots that went back to 2003. There are NO sightings listed in Torrance, only a few in San Pedro, so I have to assume the data is rather randomly collected, or favors certain areas (the north) over others. And, when I went to Urban Wildland's website, the latest news on the home page was dated 2015. (Did not see a date on the KCET story).

KCET also has a 10 minute video about what is being done to track coyote in Los Angeles. And surprise! The first thing we learn is that we don't know very much about urban coyotes.

Posted by Vickey Kall at 9:39 PM No comments: 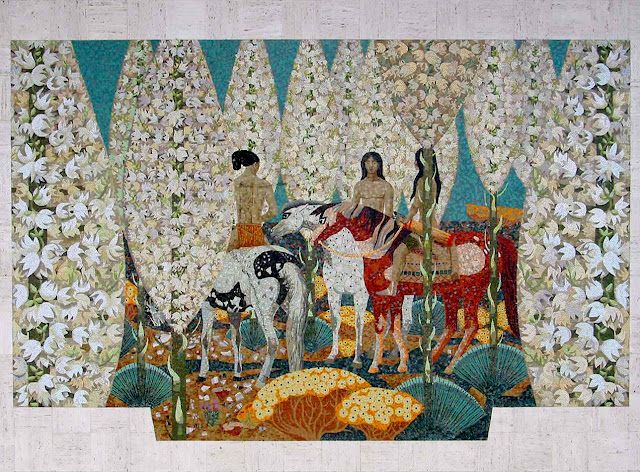 The New York Times interviewed Professor Adam Arenson, who is writing THE BOOK on Millard Sheets and his artwork, especially the mosaics, stained glass, and murals connected with the Home Savings and Loan buildings. You can read the article that just appeared: The Artist Who Beautified California Banks.

The piece gives a brief overview of Sheets and his accomplishments, and of Arenson and his research. It's been a few years since I was able to meet both Professor Arenson and Tony Sheets (son of Millard, and himself an artist), and since Westways ran my article on the same topic. But I remain fascinated by his work. This picture is from a bank in Claremont, the city most closely associated with Sheets since Claremont is where his studio was. Today it's a US Bank, at the corner of Indian Hill and Foothill.

Another interesting story, this one from LACurbed, tells the history of the Reagan Ranch. Remember that? All the news media wanting to get pictures of the President on a horse, being, well, Western - but no one could call it the Western White House. 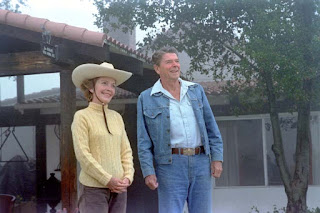 The adobe house where the Reagans lived was built in the 1880s, by a homesteader with the same last name as another governor of California: Pico, but there was apparently no real realation. The place was a true cattle ranch from the 1940s through the early 1970s. The Reagans redid the roof, the floors, and more - you can read all about it.

One very poignant line about why the ranch was put up for sale after the former president was beset by Alzheimers; "The wide open spaces that had once so inspired Reagan now frightened him."

If you've been hearing about the new concrete being poured in Hancock Park, you no doubt know by now that it lasts much longer than asphalt. You can learn more about the advantages of concrete in detail here, where civil engineer answer a few questions. I have seen concrete street like Hancock Park's (and concrete alleyways) in several old neighborhoods in the South Bay--and never realized why those streets looked so different from others. Clearly, I'm not a civil engineer.

And if you've missed the news stories and are wondering why neighborhood street repair is a major news story, here's the CBS take.

And if you could care less about streets but go "Ahhh" over historical clothes (like me), I have two treats for you (though they are not Los Angeles related): 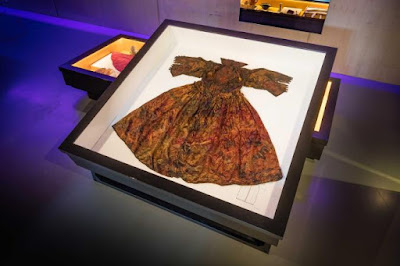 Posted by Vickey Kall at 8:24 PM No comments: 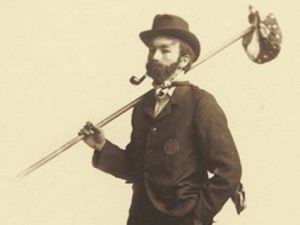 Some of you may remember hearing about hobos when you were children. Before I knew about real homeless folks, I learned that in olden days, wandering men used to tie up all their belongings in a big red handkerchief and loop that over a stick. Then they'd hop onto a railroad car and go wherever it took them. Such was the tale; I have no idea what life was really like for these guys.

While looking for this picture, I learned that hobos were working men, not to be confused with simple vagrants. Important point.

Well, anthropologist Susan Phillips, who studies gang graffiti academically, stumbled upon some marks made with grease pencil and dated from the early part of the 20th century. Right here in Los Angeles. Expert that she was, she realized that these were signatures of well-known hobos. 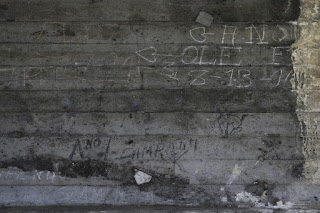 Those sideways hearts are really arrows, pointing upriver, according to Phillips. Probably, the man who drew them was headed to Griffith Park.

The rare graffiti was scrawled and even carved under a bridge over the Los Angeles River channel. It survived largely because after a major flood in 1938, that channel was dug down deeper and covered in concrete to prevent future flooding. That put the old graffiti far above anyone's reach and sight.

The LAist also reported it.