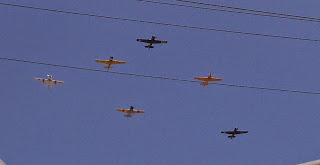 These pictures were taken at the Armed Forces Day Parade in Torrance last week. The parade has been going on for 56 years now; it started in 1959. And I was at that one too.

Of course, I remember very little about it, being only four years old. My grandmother was friends with Bert Lynn & his wife Chick, and they had invited us over to their home, which was on the parade route. We sat on maple chairs made for children, just back from the curb, and I think Mr. Lynn rode in the parade, since he was on the School Board.

But the soldiers marching and the military vehicles made no impression at all. In fact, my most vivid memory is of the glazed donuts my Mom brought to us when she got off work at the doctors' office down the street. Glazed donuts were a rare treat!

Here are some interesting events and talks going on in the next few weeks--the first two are presented through Zocalo. 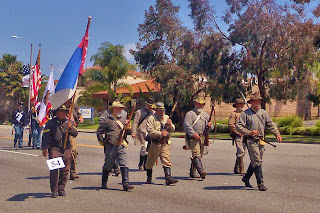 Luis Valdez, producer of La Bamba, and Moctezuma Esparza, producer of Selena, join film critic Claudia Puig to discuss not only challenges in film making, but how movies like theirs express and shape culture. At Arclight Hollywood, 6360 Sunset Blvd. Details here. From what I can tell, this talk is free though they do ask for reservations.

The backstory: In the ongoing wake of our constant destruction of local historical sites (the bulldozing of Ray Bradbury's home being a very recent example), the Getty and the City of Los Angeles have partnered to create HistoricPlacesLA. The purpose is (according to Zocalo), "To help us get a grip on our local heritage."  This panel celebrates the debut of that site. HistoricPlacesLA is "the first online system to inventory, map, describe and help protect Los Angeles' significant cultural resources."

The site maps out the areas of Los Angeles to be included, and divides the criteria of historical significance to cover industrial and commercial properties as well as historical periods. 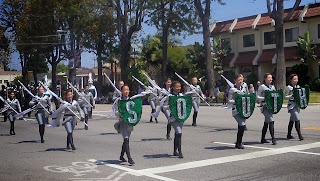 Saturday, June 13th, from 2 to 4 pm, rock photographer Neil Zlozower will be interviewed by music historian Jeff Schwartz at Los Angeles Central Library, in the Mark Taper Auditorium. Zlozower has been taking pictures of rock stars like Guns N' Roses and Van Halen for four decades, and this interview is in conjunction with the ongoing exhibit of Zlozower's work--which will be on view until June 28.

Sunday, June 14th, from 2 to 3:30 pm, Adam Arenson will talk about Millard Sheets and the Art of Home Savings. Professor Arenson is writing a book with the projected title is Privately Sponsored Public Art: The Millard Sheets Studio, Home Savings and Loan, and the Corporate Creation of a New American Urban History.

The free talk will be at the Santa Monica Main Library and  this link has the info and another link to directions.

And, of course, the LA Conservancy continues to offer its Walking Tours, taking folks through Union Station on Saturdays, the Biltmore Hotel on Sundays, and many themed Los Angeles neighborhood tours. Want free ? They've got self-guided walking tours as well--all you have to do is print out the information.  Like this one that takes you to all the shooting locations of one of my favorite movies, (500) Days of Summer.

Posted by Vickey Kall at 1:56 PM No comments: