It's Monday night, The Daily Show starts in 9 minutes, and I have zip for Mosaic Mondays. I'm rubbing ashes in my face in contrition. How's this--a couple of Los Angeles Times stories run this month.
That's it. That's all I got.
Posted by Vickey Kall at 8:01 PM 1 comment:

Long Beach Then and Now 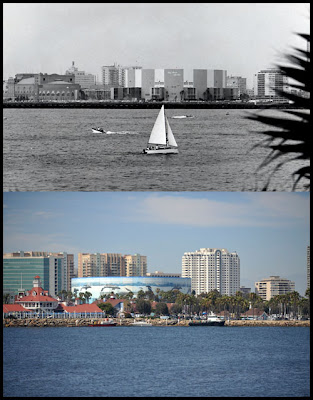 I just discovered a great site! (full disclosure and translation: I did nothing but receive an email from a friend who works at the Long Beach Library, telling me about this site. I haven't even gotten up off my butt to refill my coffee cup.)

Long Beach Seen: Then and Now is the  blog of Jeff Gritchen, a staff photographer with the Press Telegram. He pairs recent photographs with old black and whites of the same intersection/marina/building/etc, back in Ye Olden Days. Endlessly fascinating!

I hope he does not mind that I copied one pairing to illustrate. This shows the Long Beach Arena, now painted by Wyland but back in the 50s or 60s, a two-tone building. What colors are represented by the grays? I wonder. Trivia picked up from Gritchen's post (along with the pictures): the Kings played in this arena before the Forum in Inglewood was built, and the Wyland mural is officially the largest in the world, according to the Guinness Book of Records.

But this is just one set of pictures. Go see the rest!

The church and office building at 3rd and Cedar have not changed in 75 years, according to the pictures posted on March 23, 2010. Only the old Model Ts give away the era--the first picture was taken in 1927. Check out the palm trees in front of the Stilwell/Whitworth building in both pictures. Could they be the same trees? Or just later plantings that have grown a bit?

OTOH, scroll down a bit to pictures of the Marina or the City Hall and Library buildings.  What a difference a half a century or so makes. 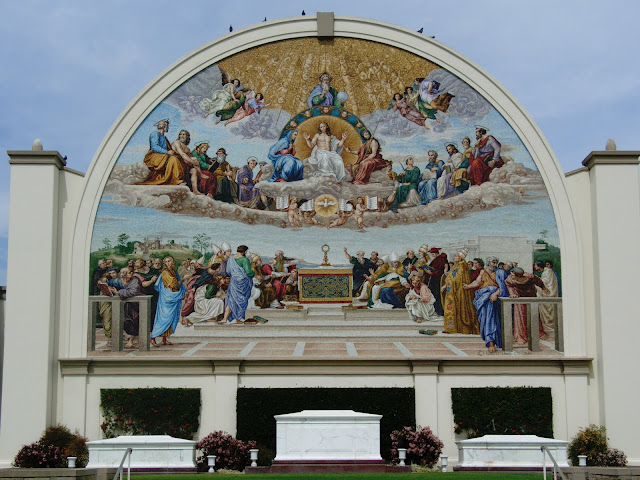 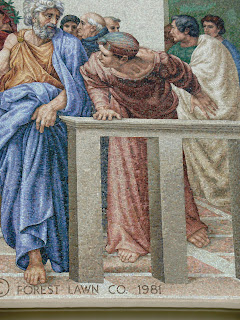 Well, I digress. Let's leave the Hollywood Forest Lawn for another day. Today I crossed the Vincent Thomas Bridge into Long Beach and the Forest Lawn on San Antonio Drive--a relatively small cemetery. It's got an outdoor mosaic too: a replica of Raphael's Vatican fresco, The Disputation of the Holy Sacrament. Only for some reason, Forest Lawn calls its thirty-two-foot high version of the fresco Paradise. (Why change the name? Did they run potential titles by a focus group?)

The original was painted in 1509-1510 according to Wikipedia; the replica was installed in 1981--as you can see from this close up of the lower right corner.

Hopefully clicking on the pictures will bring a larger version up to your screen. 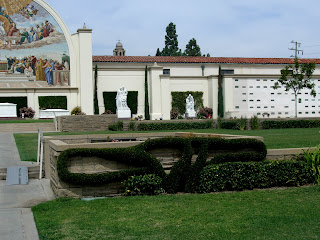 There's one more picture of the cemetery I want to share, just because I thought it was odd and pretty. A rectangular court yard leads up to the mosaic, and it's largely symmetrical--benches and statues on each side, etc. But the hedges have been trimmed in unusual ways, with no attempt to match left and right hedges. The effect is rather art nouveau and attractive, IMHO.

Posted by Vickey Kall at 7:00 PM No comments:

Star of the Sea 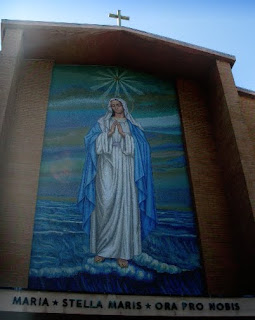 It's Mosaic Monday and I've moved to San Pedro, so in tribute to my new home town (which is technically Los Angeles), here is the mosaic of Mary, Star of the Sea, which looks out from the the Catholic church of the same name, built in 1958.

And from the Parish Website here is a photo (below) of that church just after completion. Wonder when the mosaic was added?

Ah ha! A church history, also on the website. Mary Star of the Sea was founded in 1889, and the current church is actually the third building....but no word about the mosaic.

There is also an illuminated (at night) bronze statue of Mary set on top of the bell tower, with her arms stretched out toward the docks and sea. It's very beautiful too, but this is Mosaic Monday, not Bronze Bmonday, so for once the mosaic gets the attention! 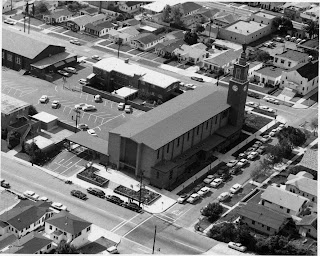 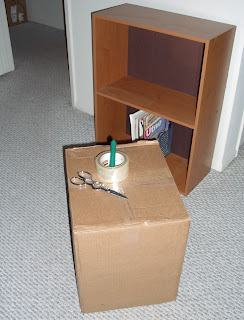 I'd much rather define "moving" as: persuading or emotionally pushing you to tears with the strength and beauty of my prose. But alas, when I refer to moving today I mean that all my worldly possessions have been packed into boxes and moved into a condo that was not quite ready to be inhabited.

Ah, well. Let's move on to lizards.
The Los Angeles Times of March 13, 2010 reports that the Natural History Museum is gearing up to survey the lizards of Los Angeles County. The LLOLA project (Lost Lizards of Los Angeles) will call on locals to document the presence of lizards in L.A. neighborhoods in late spring.

What caught my attention is that a similar project was launched in 1934.

The article referenced above gave some of the details. Apparently, one G. Warren Shufelt posited (in 1934) a catacomb city under L.A. with golden tablets hidden 5000 years ago. Somehow, this was tied to Hopi mythology and involved a super-advanced society of Lizard People. Yup. The Fort Moore hill was one site mentioned, but excavations since 1934 have not revealed any hidden chambers or catacombs.

The online article has a Proquest link. I had to go look it up, and here we are:

OMG...the guy was serious!  He had a staff of assistants! He drove a shaft 250 feet deep "on the old Banning property on North Hill Street overlooking Sunset Boulevard, Spring Street, and North Broadway." He had developed a radio xray machine that led him to believe there were catacombs under LA, from the 5th St. library to the Southwest Museum. What could they be? Well, listen up. 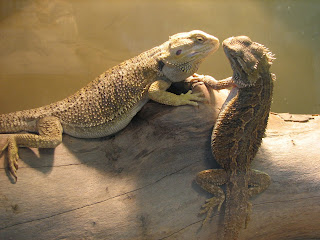 "Then Shufelt was taken to Little Chief Greenleaf of the medicine lodge of the Hopi Indians in Arizona, whose English name is L. Macklin. The Indian provided the engineer with a legend which, according to both me, dovetails exactly with what Shufelt says he found."

There's a map and everything. Just do a search on Shufelt. Three magical lost cities dug under the ground 5000 years ago, after a tongue of fire swept across the Southwest, threatening to devour all life. So the clever lizard people burrowed underground and deposited their golden tablets inscribed with all their records...including the history of the human race!

But what has any of that to do with the Museum of Natural History?
Posted by Vickey Kall at 2:59 PM No comments:

The Inland Valley Daily Bulletin reports that the once-endangered Millard Sheets Rose Parade Mural is safely ensconced at the Millard Sheets Center for the Arts at the Fairplex in Pomona. (Read about the attempt to paint over it here.) The Pasadena Convention Center Directors are negotiating with the gallery, because they'd like to bring it 'home' to their Convention Center on Marengo where everyone could enjoy it.

Kristina Gregory of Summer Studios (the Mosaic Monday posting of Feb. 15) wanted to point out that the mosaic represented a collaboration between Summer Studios Arts Academy and Mosaic Alchemy's Betty Rosen Ziff (www.mosaicalchemy.com). The Mosaic Alchemy blog is fascinating, especially the Public Art page. I've been remiss in not mentioning Betty Rosen Ziff and her work (and blog) before. I could use her resume as a base for "Mosaic Mondays" for the next six months, and cometothinkofit that's not a bad idea....

Posted by Vickey Kall at 9:26 PM No comments:

Yikes!  But it's ok; since Felix the Cat was my role model growing up, I always have a couple of mosaics hidden in my bag of tricks. This is the second Home Savings and Loan mosaic that Millard Sheets designed for Torrance, I believe. The first was set against black granite (maybe marble) on the old Torrance City Hall that became a Home Savings in the 1960s--on Cravens. Blogged about it here.

After maybe a dozen years there, Home set up a new building on Torrance Blvd, and that's where this mosaic is--now a Chase Bank at 2121 Torrance Blvd.

If I'm interpreting correctly, we have a vaquero on the left, which makes sense because Torrance was once part of the Rancho San Pedro. The center figure may be Jered Sidney Torrance hisself--the clothes seem appropriate, as does the Red Car behind him. Leonard & Dale Pitt's Los Angeles A to Z: An Encyclopedia of the City and County

says that Mr. Torrance planned out the city in 1911 as a model industrial city, and that it was a major stop in the Pacific Electric Railway.

The far right figures are a bit puzzling, not the least because of the shadows in my photo. But I see a young girl skipping rope. Next to her is a seated woman holding a child. Everyone's wearing flower-print clothes. At their feet is an animal--a cougar? The greenery around them could be a jungle or park--I opt for jungle because of the cougar.