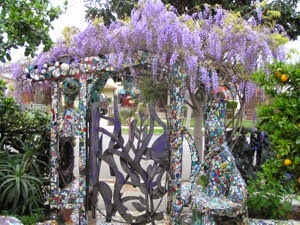 This one's no secret--it's got its own website and Facebook page, both of which proclaim the address and keep folks updated on public tour dates. The photo at right came from the website, and there are many more there--but I'm particularly fond of wisteria so we'll start with that.

The mosaic house sits on Palms Blvd, between Lincoln and Penmar. It's owned by Cheri Pann and Gonzalo Duran, both busy and successful artist. Lately, their work has been focused in Los Angeles, and a big part of that work is on exhibit in their home.

As you can see from the picture below left, from the AvoidingRegret blog, there's a great deal of pique-assiette in this home--as there was in the last two Mosaic Monday posts, which focused on works by Jolina Beserra.

But it's not all one style, and the artists, while whimsical, also consider the home a work of art first, and a novelty second. Since 1994, Cheri has created the tiles, and Gonsalo shatters and scatters, according to one post--but I'm sure it's more collaborative and less simplified than that. 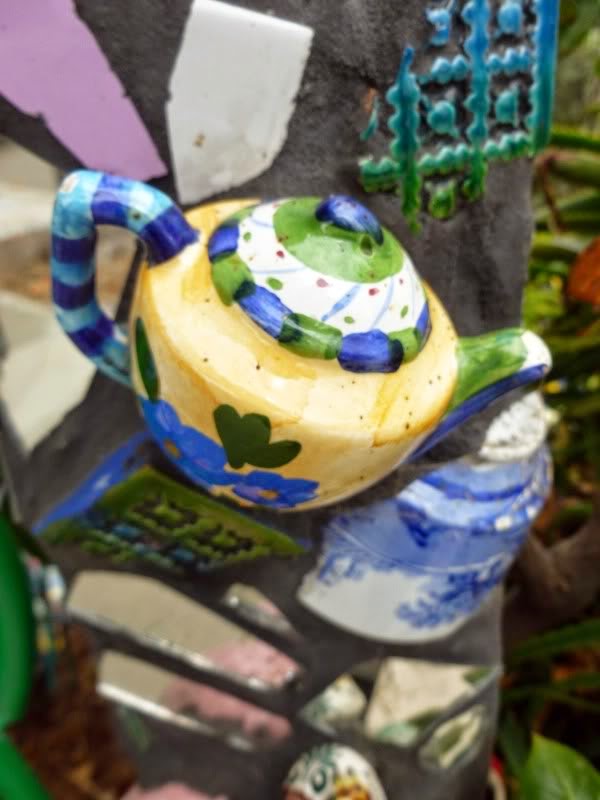 Cheri Pann told blogger Sandi of AvoidingRegret that she considers her home different from, say, Simon Rodia's Watts Towers. "For them [Rodia et al] it's an obsession," she said. "In art, there's planning. We strategize everything."

There are many photo essays on the Venice Mosaic House, but my favorite is at AvoidingRegret, and I suggest you scroll through for the big photos and the small details. I think I like it best because the post starts out by admitting that photos cannot do the house justice.

The rest of the photos here come from AtlasObscura, from a blog written by Robert, whose signature seems to be RJHEMEDES. Hope I got that right. There are many more pictures in his article, so please go see it.

First is the kitchen, and I must honestly state that I can't tell what is real above the sink and what is mortared onto the shelf and wall. The bananas are real right? And most of the coffee cups and bowls. . . maybe.

Second is the bath. Third is the front porch. Such mundane words for such wondrous sites. 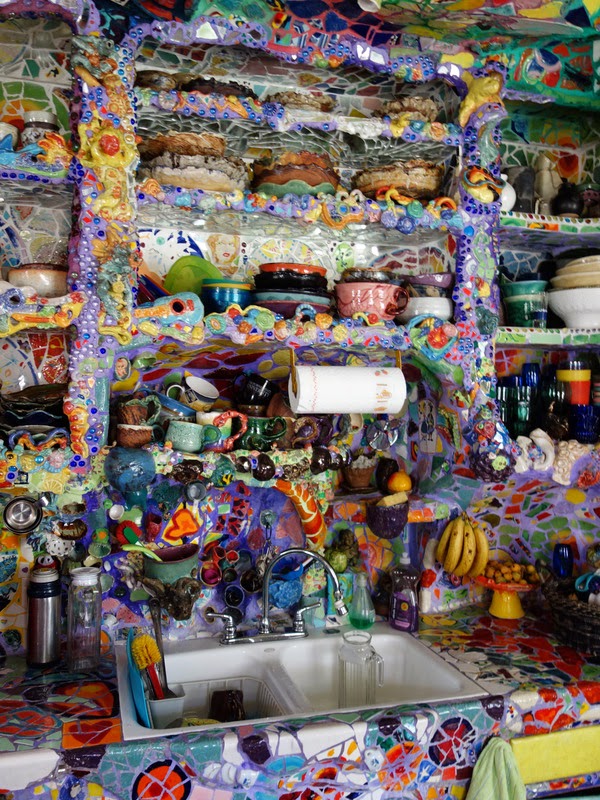 More pictures of the kitchen from other angles are on the other websites  mentioned, including this page from Cheri Pann's website. 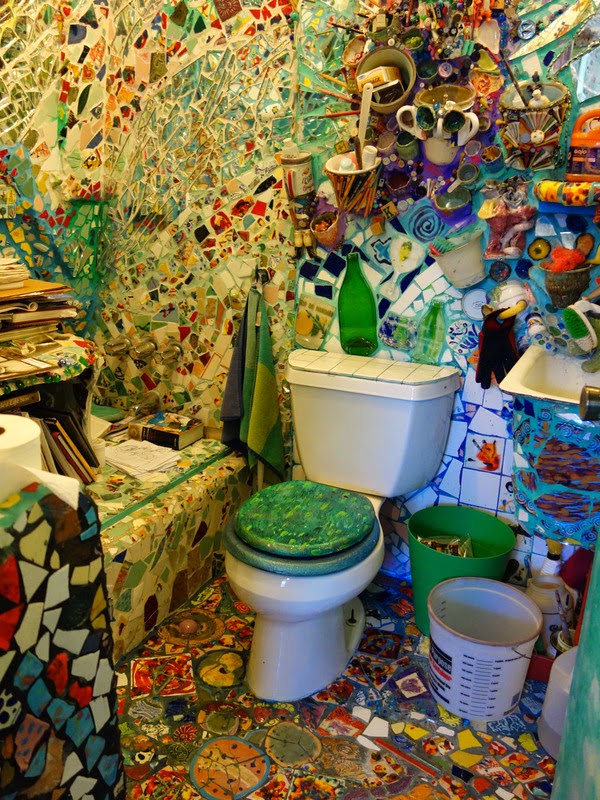 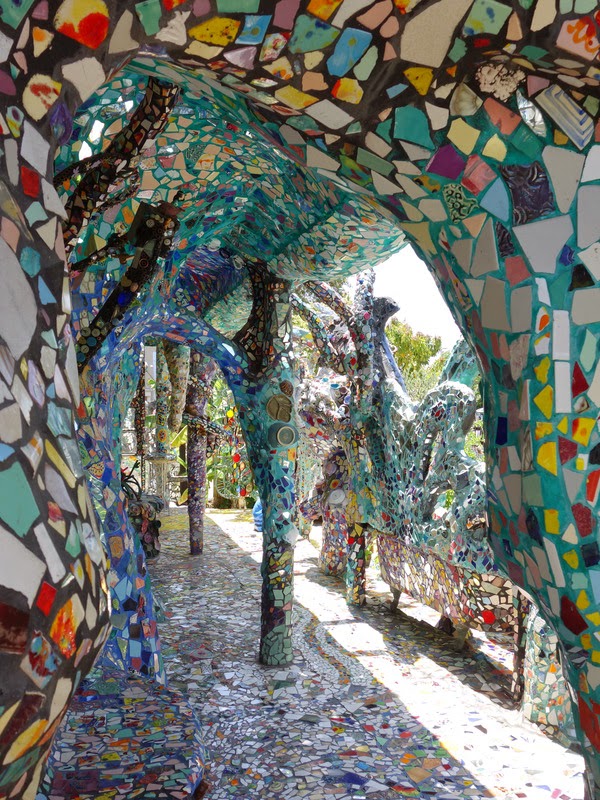 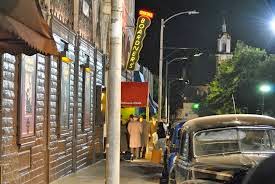 Boardner's--on Cherokee, near Hollywood Blvd--has been in business since 1942. The picture at right is recent though. Boardner's was used in the movie Gangster Squad (starring Ryan Gosling) and that's why Cherokee was lined with vintage cars and men in fedoras.

The tilted neon sign is exactly the same, but the painted brick and posters, as well as the red awning, were added for the movie.

Below is a picture of the sign at night--taken in 2012, same as Gangster Squad: the year that Boardner's turned 70. Not sure who to credit these pictures to--they are posted on several sites.

Before it was Boardner's though, it was a speakeasy upstairs, and a beauty shop called Morressy's Hair Salon downstairs. And before that, when it was founded in 1927, it was called My Blue Heaven, after the song. The owner was none other than the songwriter, Gene Austin. 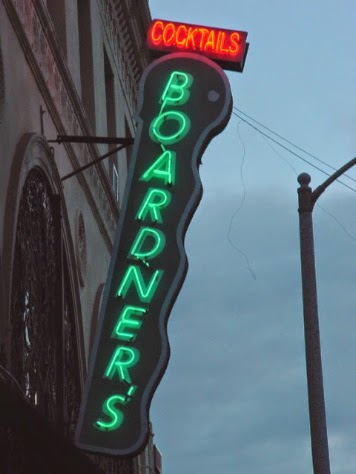 Steve Boardner came along in 1942, when he lost his lease at the Cross Roads of the World (at Sunset and Las Palmas) and was looking for a new place for his bar and restaurant. Steve established the Boardner's we know today--upstairs and down. Out with the beauty salon, in with the bar.

Here's a short list of the movies Boardner's has been in:

TV shows include NCIS-LA, Don't Trust the B in Apt. 23, Numbers, Angel, and Cold Case. That is not a complete list at all.

Boardner's biggest claim to fame may be that it's believed to be the last place where Black Dahlia victim Elizabeth Short was seen alive. Other stories are mentioned at Boardner's website.

That picture of W.C.Fields was over the booth I sat at. It's real. He signed it back in the 1940s.

Through the main bar is a patio with stage, and the floor out there is authentically old but not conducive to spiky heels. Here's a shot of it from above through a window, and another of some of the detail. Only a true history geek would take pictures like these (thanks, Flo!)

Back in the early days, this patio was for customers who parked behind--the building was the first in LA to have a drive-in business.

The entire building that encloses Boardner's is called the Cherokee building, and was designed by Norman Alpaugh--including the patio. 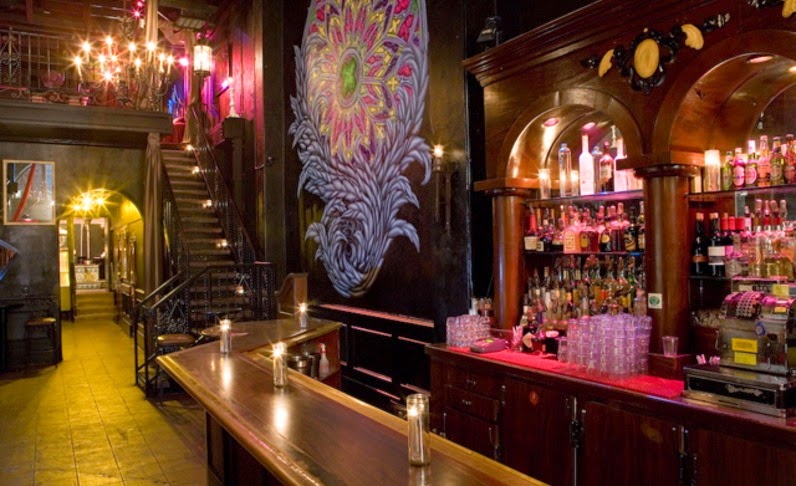 The upstairs room, which used to be the speakeasy, has been goth-ed up with an antique bar that once was at the Biltmore Hotel, and murals that replicate stained glass from the Pere la Chaise Cemetery of France. So what's not original, in other words, evokes a sense of "divine decadence." Although you do need to give your eyes time to get used to the darkness.

I'd just like to add that they serve great macaroni and cheese. And other stuff, too--fabulous nachos--but good mac & cheese is a big weakness of mine.

If you ask really nicely they'll probably give you a copy of their 5-page history, which includes a list of the celebrity regulars that have stopped by over the years. Some of the names have their regular drinks listed--W. C. Fields, it turns out, drank Coke there. Ed Wood liked scotch and water; Mickey Mantle came in for bourbon & ginger ale. Phil Harris ordered coffee and anisette.

Posted by Vickey Kall at 8:51 PM No comments: 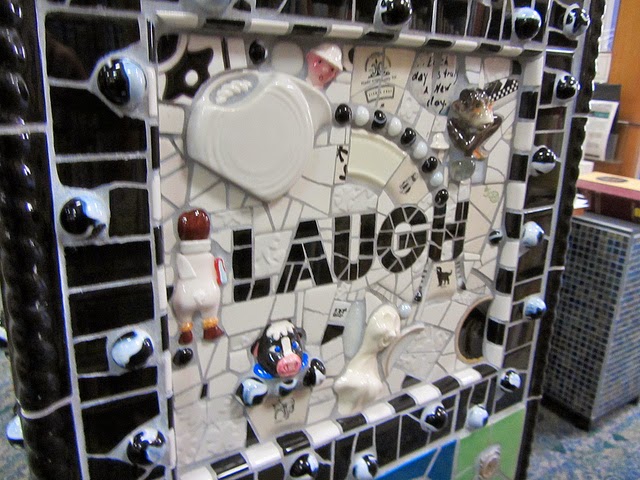 Another week, another library, another children's room, another pique-assiette mosaic by Jolino Beserra. Could that possibly get old? Take a look at the picture on the left, and you tell me.

This mosaic pillar was installed in 2011 in the Children's Room of the South Pasadena Library, and I believe the Friends of the Library covered the expenses.

And that's all I know--I will leave you with this lovely photo of the pillar, up on a Flickr photostream by one Walterrr. Posted by Vickey Kall at 4:35 PM No comments:

Tiki Bars in Los Angeles and Beyond

Monday again? Yikes, where does the time go?

Don't answer. I know. I have 3 facebook pages to update daily, a twitter feed, and my lovely WritersCalendarLA.com site--check it out--just for a start. BUT . . . 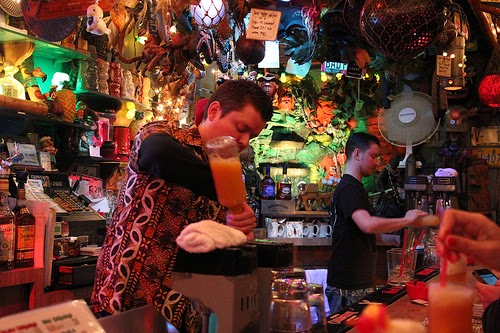 Maybe this will inspire you to do your own research, because the solstice is right around the corner and where better to celebrate?

Email ThisBlogThis!Share to TwitterShare to FacebookShare to Pinterest
Labels: restaurant 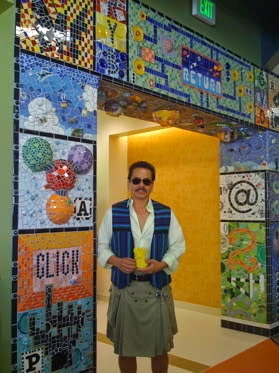 Pique-Assiette means taking bits from others' plates, as near as I can figure. In mosaic, it means incorporating broken bits of ceramic and found objects into the artwork. I wrote about pique-assiette and this week's artist, Jolino Beserra, in 2011 when the Los Angeles Times featured the mosaics he created for his own house in a story.

Today--and next week too--the spotlight is on mosaics that Beserra created for a couple of local libraries.

The archway leading into the children's area of the Alhambra Civic Center Library comes first. That's it to the left, with the artist. The picture comes from Lisa Yee's blog. The little yellow fellow in his hands is named Peppy, belongs to Lisa, and sneaks into most of her photos.

This library is new; it just opened in late 2008. Ms. Yee has photos of the opening too, here (and on the right, below).

Jolino Beserra's website has a beautiful photo presentation of the library mosaic, which I urge you to look at. Close ups of many of the panels.

Here is part of the statement that opens the slide show:

"The concept is to mix technology and the arts & sciences in a way that will inspire children to explore all the possibilities available to them in books. My goal was to create a magical gateway to the joys of reading and imagination."

(Do you know how many ways there are to misspell Jolino Beserra? Hopefully I'll have them all corrected before I hit "publish." And yes, I know my own name is worse.) 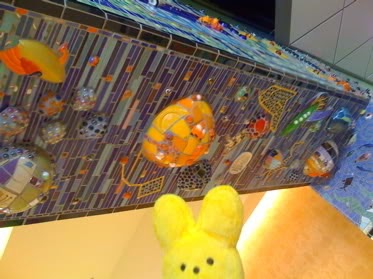 Skipping around Google, I can tell you he has five rescues, which endears him to me.

Beserra was born in East Los Angeles, grew up in the San Gabriel Valley, spent two years at Pasadena City College and got his BA from the Art Center College of Design. That was in 1982, and he went to work for an advertising agency. In 1985 he started his own studio with his partner--now husband--David Edward Byrd.

Almost every article about Beserra mentions that Simon Rodia's Watts Towers had a deep influence on him. He worked there as a summer intern restoring the Towers in 1989, and his yellow-and blue room-sized homage to Rodia may be the topic of another Mosaic Monday.

Other early influences that molded his career was seeing, during a trip to Arkansas, some folk art: bottles that had been lovingly covered with buttons, service medals, and more, made by a grandmother for her grandchildren, and the discovery of folk art animals.

As he says on his website, "My goal as an artist has always been the desire to create visual stores."

Posted by Vickey Kall at 3:51 PM No comments: