Just after Huell Howser passed away, I watched his show about the Saint Sava Serbian Orthodox Church in San Gabriel, which is full of mosaics.

Digression: Let me just say for the record, that any imitations of his Tennessee drawl were done with love. I miss Huell--he filled the gap left by Ralph Story, who used to do a similar show back in the 1960s. Both men found history all over Los Angeles and brought it to life for television viewers. I doubt if anyone could replace him. 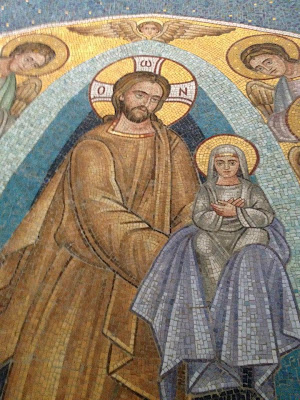 The current Saint Sava church was consecrated in 1984, and the mosaics were designed and installed shortly after. The church itself follows an early Byzantine design; the architect was Konstantin Zurdumlis, who was raised in the town of Krusevac, Serbia.

Here is what the church's history page says about the mosaics:

In March 1986, St. Sava Parish hired Sirio Tonelli, a high class artist to create and install the mosaic iconography in the St. Sava Church interior. He was born in Florence, Italy and comes from the place of famous Renaissance painters. The mosaic was made in Florence before it was installed in the Church. It was created in Byzantine tradition touched with Renaissance spirit displaying beauty and grace. Judging by what has been done so far; the Church looks majestic and makes a very spiritual impression on every visitor, and especially on the faithful of the congregation.

The church stands at 1640 S. San Gabriel Blvd. in San Gabriel and holds services every Sunday at 10 am. I suspect it's open for visitors most of the time as well. 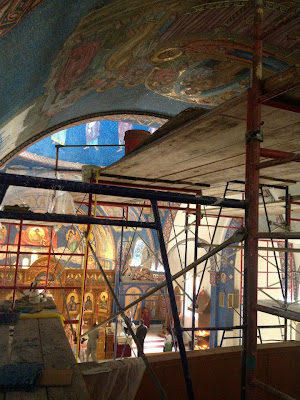 Here's a clip from KCET's website showing a trio of young people singing at the church--you can see some of the smaller mosaics that line the walls in the background.

From what I can tell, the last ten years have been spent completing the mosaic dome of the church. You can see a hint of that in the picture at right--the brightest blue is the lower part of the dome. But I will gladly correct this post if someone wants to send me more information!

Posted by Vickey Kall at 2:11 PM No comments:

Drop what you're doing and go see this now at the Los Angeles Times website. The left half of the screen is 1959, and the right is 2009. But the pictures actually overlap--move the slider around for the full effect!

Writers Calendar for Los Angeles...and Rodeo Drive in the 80s 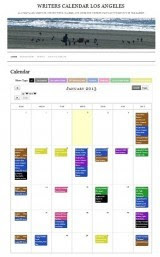 How many writers follow this blog? I have put up a gift for you: a calendar of events that would be of interest to scribes.

There are two exceptions to the above description--two types of events that are not listed on the calendar itself:

The WritersCalendarLA is color-coded by area so you can key in on the events close to you. Los Angeles is black, the Valley brown, the San Gabriel Valley and Pasadena purple, the Westside blue, South Bay pink, Long Beach into OC green.

As I've been telling people--the only reason an event is omitted is because I don't know about it yet. So please keep me informed. 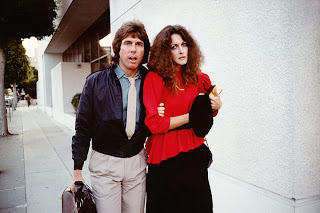 And...just so I can say I stuck in some history here, guess which decade these dashing Rodeo Drive shoppers were snapped in?

This photo is © Anthony Hernandez, courtesy MACK / www.mackbooks.co.uk, and comes from a Flavorwire photo-essay, "Fascinating Street Shots of Rodeo Drive Shoppers in the '80s." And the 80s, as we all know, is Ancient History now.

Flavorwire has an eclectic mix of photos and lists--a third of them delight me, a third make me shrug, and the last third make me wonder "What sort of oddball would care about that?" 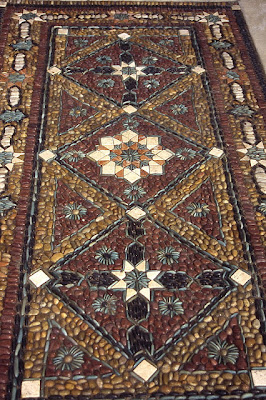 It's rare that I get to post about mosaics in private homes, but this week, thanks to being on MosaicArtNow's mailing list, I do have such a treasure: Jeffrey Bale creates pebble mosiacs in gardens.  (The link goes to his blog, which is rich with photos of his own garden in Portland, OR and of mosaics and gardens from his travels.)

(And these photos are from his blog; I hope he doesn't mind.)

This mosaic is called Brooke's Morroccan Carpet, and it is, of course, based on a Morroccan carpet design. It's part of  a large installation in a Hancock Park/Windsor Square area garden.

Bale writes that he "first arranged the entire mosaic in a bed of sand on site and then disassembled it and set it in mortar, using forms to break it up in to sections."

The garden also includes a Tree of Life mosaic on a pre-existing fountain, a large firepit with beach stones and cut Turkish limestone tiles forming 8-pointed stars, and a tea house constructed from carved wooden panels from India and a pavilion from Indonesia, all reassembled with mosaics using the same 8-pointed star motif. AND a sunken garden--but you really have to go to his blog to read about that (there are two posts).

He gets lots of his pebbles from the suppliers who scoop them off the beaches in Baja California--a bit of trivia that I love since that's where marketing phenomenon Gary Dahl got the pebbles for his Pet Rocks, back in the 1970s. 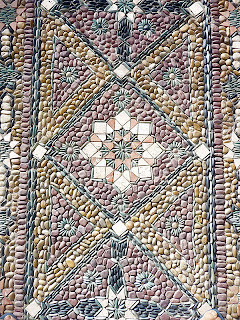 The Seattle Times ran this interview with Bale, and identifies the garden as being in the home of Tony Shalhoub and his wife Brooke Adams. That piece quotes Bale: "Gardens should be something that change you."

A New York Times 2009 article came with this slideshow of more of the features from this particular garden . . . and another quote: “I feel that the designs should have meaning and trigger consciousness”

Both these sources--the blog and the interview--have tips on how someone could create their own rock mosaic, which is nice. Not that I'm inclined to try, but plenty of people could. I can see many of my friends getting lost in this sort of creation.

And though there's no tie-in to Los Angeles, here is another site with pictures and information about pebble mosaics: InspirationGreen.com. It features both Bale's and Maggy Howarth's work.

Posted by Vickey Kall at 3:34 PM No comments:

California History and a Missing Chalice...gotta love that!

On January 17 (this Thursday) the Lomita Railroad Museum will present a: 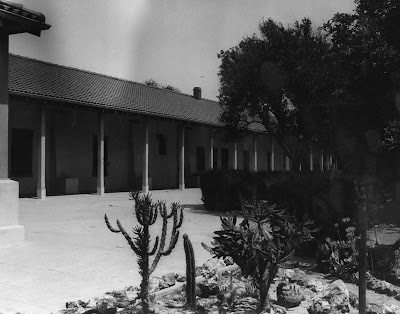 "fascinating account of Nisei families who worked the land on what had been the Dominguez Rancho, the impact on them of the Alien Land Act of 1924, and correspondence uncovered in Dominguez estate records about how to protect their Nisei tenants. Also learn about the ongoing search for a missing chalice given by the Nisei families who lived on the Rancho in appreciation to the Dominguez family."

The photo is from our library, and shows the Dominguez Ranch House in 1936 (it's been rebuilt since.)

The talk--"Nisei Families & the Dominguez Rancho: A Story of Respect and Appreciation"--starts at 7 pm, after a half-hour reception.

The speaker is Toni Wasserberger, Professor Emeritus of English and History at El Camino College Compton Educational Center. She was co-developer of the Compton College Nisei History Exhibit created in conjunction with the 2010 graduation ceremony granting honorary degrees to 78 Compton College students whose studies were interrupted in 1942 when they were sent to internment camps. 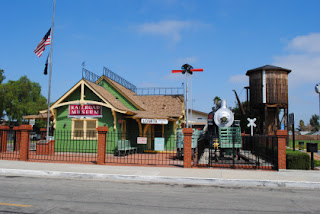 Toni has also volunteered many years as docent at the Dominguez Rancho Museum.

The Lomita Railroad Museum is at 2137 W. 250th Street in Lomita (a residential neighborhood, but there is parking.)

Los Angeles Builds out of Fantasy, Not Bricks & Mortar

The Central Library presents a fun and fabulous program on February 2nd at 2 pm, and it's free!

"A City of Fakes: A History of Themed Environments in Los Angeles"

Here's what the event covers (from the library's website):

"Most cities build monuments out of stone, Los Angeles builds them out of fantasies. From backlots to theme parks, L.A. has long been a city of imaginary worlds. There are Mayan temples that show movies, cruise liners that bottle Coca-Cola, and Babylonian palaces that manufacture tires. Join Zed Adams and Eric Lynxwiler on a tour of faux reality, as they chronicle the history of one of L.A.'s most distinctive contributions to 20th century architecture and design: the themed environment. Drawing upon the photo collection of the Los Angeles Public Library, they guide you through the history of Angelenos living, working, and playing in a city of fakes."

The "cruise line that bottles[s] Coca-Cola" is pictured--it's from the library.

This presentation (at the Mark Taper Auditorium at the library) is from the LAPL's Photo Collection and a group called Photo Friends.

Since I spend so much time on the library's website, I should have been watching their events page! It'll be something to stay on top of in future. Fortunately, I follow them on FB so I'm not completely out of the loop.

Posted by Vickey Kall at 1:33 PM No comments:

First Mosaic Monday of 2013--Back to Long Beach 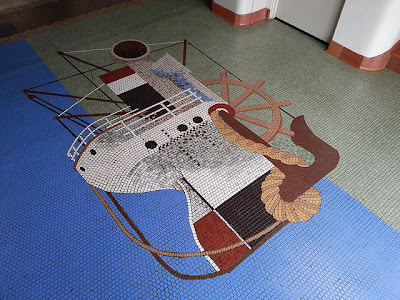 I blogged about the WPA mosaics at the Long Beach Airport in 2011. I mentioned--and posted pictures of--a beautiful rose compass on one floor titled "Zodiac."  That was one of several mosaics by artist Grace Clements.

The other mosaics included a world map, seagulls, fish, and I think the city seal.

But since then, maintenance workers uncovered even more mosaics, also by Clements, beneath carpeted areas of the terminal. Like the ship, above, or the hand dialing a telephone, at right. 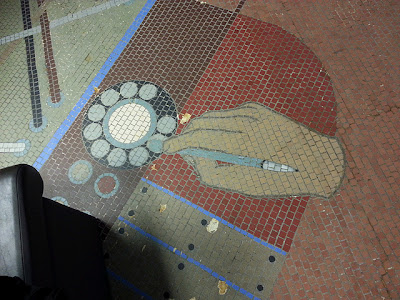 Other sections of the floor contain squares of color or meander patterns. There's even a sunburst on the floor of a stairwell.

I mentioned in that previous post that the mosaics were part of a big airport expansion that was scheduled to be unveiled in 1941, in December--on the Sunday that Pearl Harbor was attacked.

So after a bit of refurbishment work, Long Beach re-unveiled the mosaics in early December 2012. Not all are visible to the casual visitor; some are in areas that can only be accessed if you have a boarding pass. 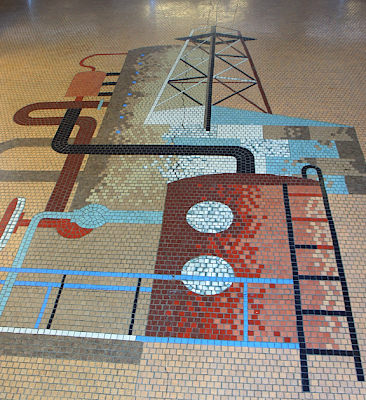 The Los Angeles Times presented a photo spread of the mosiacs here.  The pictures even include some of men pulling up the old carpet before the mosaics were found.

Why take photos of the work in progress? Although the mosaics had been under the carpet for decades, they were not truly forgotten. That's brought out clearly in this interview with Mario Rodriquez, executive director of the airport , in the Long Beach Post. People knew that more mosaics were there, but not how damaged they might be. If you take a close look at the oil derrick left, which came from the Post piece, you can see a vertical crack running down the middle.

That Post article also has a very long comment by City Council member Gerrie Schipske, who wrote a book about Long Beach aviation 3 years ago. She quotes the descriptions of the mosaics in the comment, and also describes how they were installed--well worth reading.

Posted by Vickey Kall at 9:39 PM No comments: