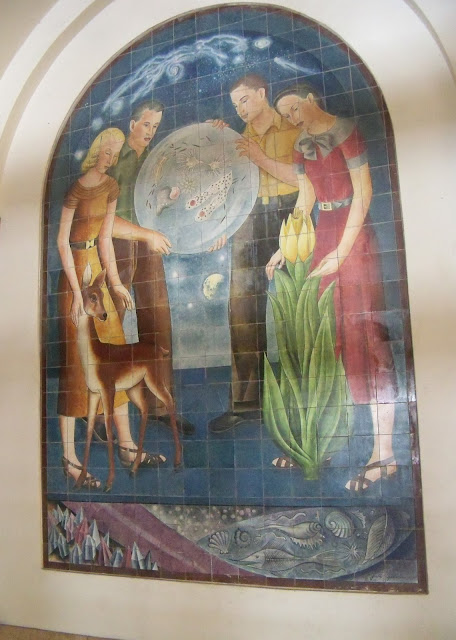 The Los Angeles Times Festival of Books was last weekend! And a fat lot of good that announcement does if you missed it. But it explains, at least, why I was at USC on Sunday, where I was able to take this picture.

I'd heard there was a mosaic by Jean Goodwin Ames titled "Youth and Science" in Zumberge Hall, right on Trousdale. And so there is, though I think I'm stretching the definition a bit to call it a mosaic.

If you'd like to know more about Jean Goodwin Ames and her husband, Arthur Ames, who worked on commissions for New Deal agencies during the Depression, and later with Millard Sheets, and who left lots of public art both in Los Angeles, San Diego, Orange County, and other areas, the Smithsonian interviewed them for their Archives of American Art. The transcription is here.

Jean Goodwin Ames was born in Santa Ana, went to UCLA and USC, and taught at Claremont Graduate School and Scripps College from the 1940s. Total California girl! This tile mosaic at Zumberge Hall was her master's thesis. 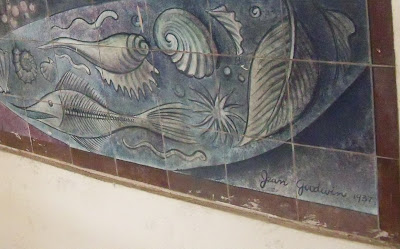 In the Smithsonian interview, she says that the couple's first mosaic project--two mosaics--was in Santa Ana at Newport Harbor Union High School, before 1936. The school was just six years old then; here's a history.

The two mosaics--one for girls, by Jean, and one for boys, by Arthur--were installed around the Inner Quad. They were removed and reinstalled in a new building a few years ago. 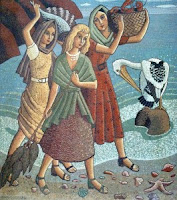 I just went looking for pictures of the high school mosaics and found them at Adam Arenson's site--a familiar name if you follow this blog, or mosaics in Los Angeles. I'm posting only one small picture--the one done by Jean. To see the larger version or the second mosaic, titled "Three Fishermen," visit Adam Arenson's page.

His post about the Ames is very interesting. A particular picture of an outdoor church mosaic was so familiar--and I realized I used to walk by it almost every day when I lived in Claremont. 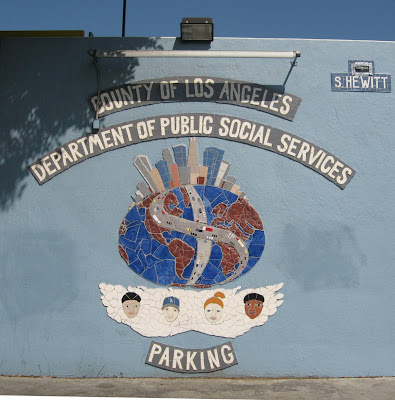 The three mosaic panels on the parking garage of the Department of Public Social Services Building at 813 E. 4th Place represents a community effort. Daniel Dodd, the designer, chief mosaicist, and  the director of Art Share LA (a gallery and artistic space right across the street), worked with students from Roosevelt High School and other volunteers in the area. They created the first mural, shown at left, in 2002.

All these pictures come from the LA County Arts website. So did the following description:

"Their first mural depicts the City’s diversity by setting the skyline of Los Angeles above an image of the globe which is crisscrossed by LA’s freeways.  Below the globe are the faces of four children, all of different ethnicities." 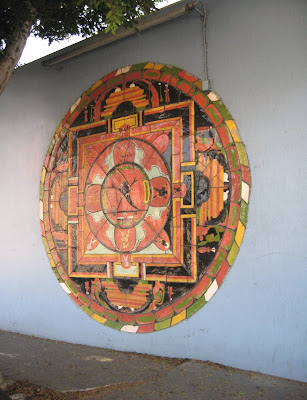 The second mosaic  is inspired by a Buddhist mandala. The third--below--looks like an Aztec calendar. Both the second and third artworks are nine feet across.

The same group is working on a fourth mosaic based on Japanese designs.

Other examples of Dodd's artwork are the mosaic tile palm trees and other figures on the pillars supporting the pedestrian overpass over Long Beach Blvd. at 53rd Street. 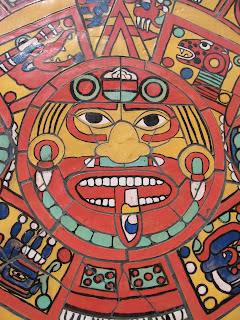 All of the above is just a regurgitation of the data presented on the LA County Art page, but I cannot find out more! Daniel Dodd seems to be the only artist around who does not have his own web page . . or facebook page . . .(actually, there are dozens of Daniel Dodds on FB, but none in California), and there are no mentions of him in the Los Angeles Times.

So this is all I got, but at least it is posted while there are still 40 minutes left on Mosaic Monday! 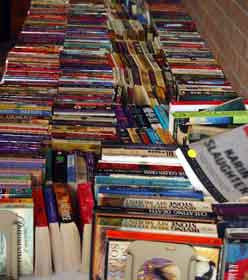 At the Valley Inn in Mission Hills--

And it all costs a big five dollars.

This image comes from the Idaho Falls Public Library Friends of the Library Book Sale Page.

Posted by Vickey Kall at 9:59 AM No comments: 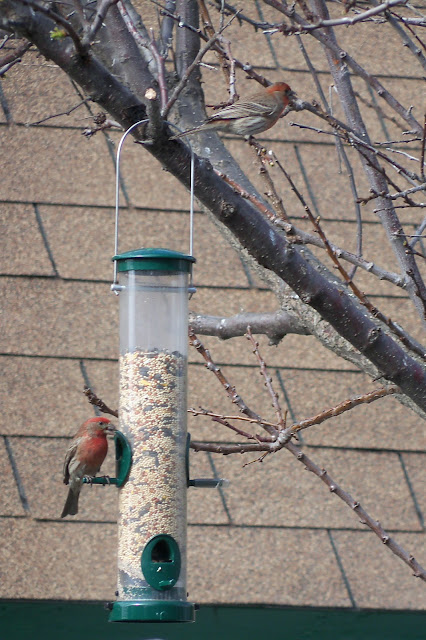 Are these purple finches or house finches?

And how do you tell?

Posted by Vickey Kall at 9:46 AM No comments:

Email ThisBlogThis!Share to TwitterShare to FacebookShare to Pinterest
Labels: Birds 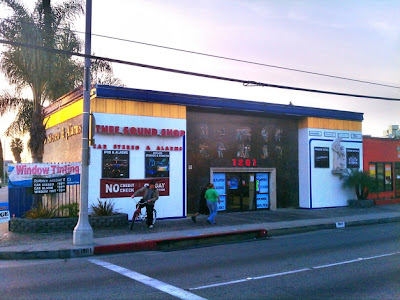 Did Millard Sheets create the ten mosaic panels on the facade of what was once the Home Savings and Loan building on Long Beach Blvd. in Compton? I thought so, but...

The Pacific Coast Architecture Database confirms that Millard Sheets worked with David Underwood to design and oversee the building which was finished in 1962. But it credits Mr. Van Sant with the mosaics. 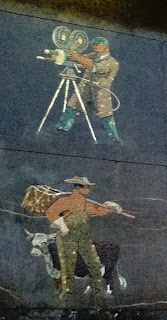 Adam Arenson and Lillian Sizemore are working on this, and Prof. A has blogged about the building here, dating it to 1958. As he points out in his post, the mosaics are in sad shape.

Two of the panels are shown at right. To see a very good shot of the entire mosaic, go to Adam Arenson's blog post.

The exact address is 1801 N. Long Beach Blvd, north of Rosecrans. THEE Sound Shop is there now. Not sure if they own the building; Loopnet (where this picture is from) says the property is off the market.
Mr. Van Sant has created over 60 public murals, mosaics, and sculptures, according to the LA County Arts Commission. I've blogged about the Bell Library mosaic here, and included a picture of a vibrant, striking mosaic done for the Otis Art Institute in that post--it's very different from his library and Home Savings work. I think he's best known for the soaring, graceful lines of his sculpture.

And of course, "The Earth From Space," which is also a mosaic made of more than 2000 photos, and which took around four years to construct in the 1980s. It's part of the Geosphere Project. 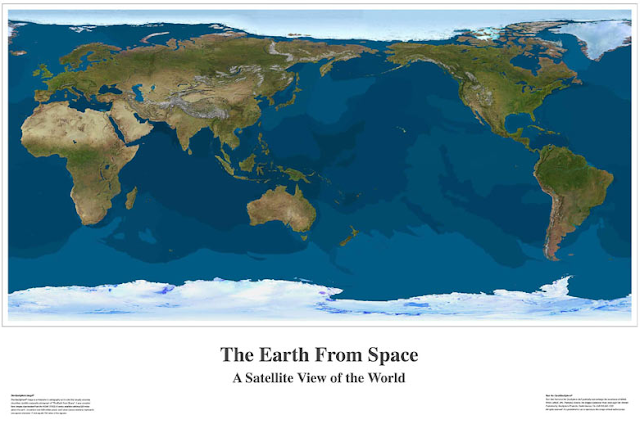