Mosaics Inside and Out at WestA 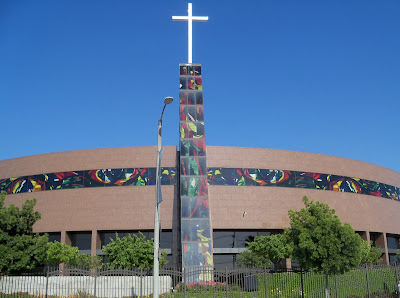 The West Angeles Church of God in Christ sits at Crenshaw and Exposition Boulevards in Los Angeles--and it is full of mosaics.

Construction began on the Karelian granite building in 1999, and the first service there took place in 2001. The church--as in congregation--is much older than that, though. WestA's website says it was founded in a storefront on Vermont in 1943, by C. E. Church, Sr. Well, what else could he have done with such a name?

The West Angeles Church moved to West Adams in the 1950s.  Pastor Charles E. Blake took it over after Church's death in 1969; at the time it had 50 members and most of them didn't want Blake as their pastor. 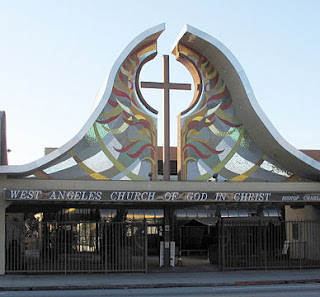 Today, the congregation numbers 22,000, all Blake supporters. According to The Hollywood Reporter, Stevie Wonder and and Samuel L. Jackson, Angela Bassett, Magic Johnson, and Denzel Washington (the last two contributed $5 million to build the Crenshaw-and-Exposition structure) are among them.

The church first moved to what is today called the North Campus in 1981--it has a beautiful mosaic out front too, as you can see at right. The North Campus is at 3045 Crenshaw, just two blocks away from the main building.

Monika Scharff of Scharff and Scharff designed the mosaic on the North Campus, and she later did the interior mosaic for the new church (below).

The church kept growing and expanding. The current building cost $60 million to erect, seats 5,000 people, and has a 5-level parking garage, according to one source. 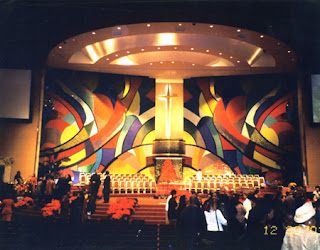 Inside the new church is a stunning mosaic made up of 700,000 pieces of stained glass. Again, it was designed by Monika Scharff.

You can see more examples of her work here, . . . I just realized she also did the gold-and-red mosaic cross of St. Peters By the Sea, a Palos Verdes church that I blogged about in 2011. Scharff's website shows the cross before it was mounted in from of stained glass windows, but it's definitely the same cross. I'm guessing she did not have anything to do with the windows, though.

I hope she does not mind that I copied one of her own pictures of the mosaic.

Posted by Vickey Kall at 7:46 PM No comments: 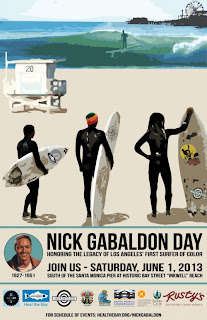 I'm not making that up.

The Black Surfers Collective will be at the Santa Monica beach from noon to midnight on June 1st, along with Heal the Bay and other groups. At the Inkwell, free surf lessons from 10 am to 1 pm (you must reserve in advance!)

Other activities are planned in the area and at the Santa Monica Pier Aquarium to celebrate the life and legacy of the man considered to be the first African American surfer, Nick Gabaldon.

He died in 1951, but before that was a fixture of Santa Monica's Inkwell--the only area of beach open to African Americans back then.

Gabaldon went to SMHS and was killed while surfing--while doing what he loved, iow. He was 24 years old.

Here's an earlier post about him and the Inkwell.

Also--there'll be a screening of a new documentary on Gabaldan that day.

I was beginning to think that the California Historical Society had abandoned the Southland, deciding that real California History could not exist south of San Francisco. Fortunately, this is not the case.

Other events for next month: 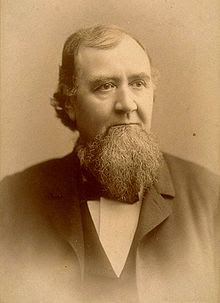 David Terry was California's Chief Justice in the late 1850s. While holding that position, he stabbed one Sterling Hopkins in the neck with a bowie knife. Hopkins lived and Terry was acquitted of charges. He later killed a State Senator in a duel outside of San Francisco--I think he was still a judge then too. He left California to fight on the side of the Confederacy in the Civil War.

Should be an interesting evening.

Boiler in a Craftsman Home 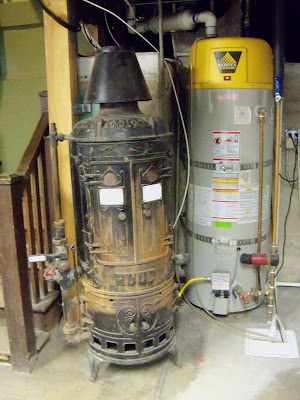 When a new owner took over a beautiful Victoria Park (West Adams) Craftsman less than ten years ago, there were five ancient boilers in the basement.

The new owner replaced them with this (obviously) strapped water heater, but I find myself wondering--as most Los Angeles area homeowners would, because we knew the changes we've had to make as earthquake safety regulations are passed--five ancient boilers standing on their wrought iron legs on the cement floor?

Were they ever strapped and secured? Did anyone ever check?

Since the house was bought and sold several times over the years, and since it was only given historical landmark status very recently, this puzzles me. But in a good way, because obviously nothing bad happened due to the boilers, and they do present an interesting piece of history.

I'll write more on this house later, when I've had a chance to look up more facts about the original owner.

Email ThisBlogThis!Share to TwitterShare to FacebookShare to Pinterest
Labels: homes

It's actually the Friendship Pond mosaic, but it's at Friendship Park in San Pedro. On Mother's Day, this place had the best views and the most welcome breezes in town. 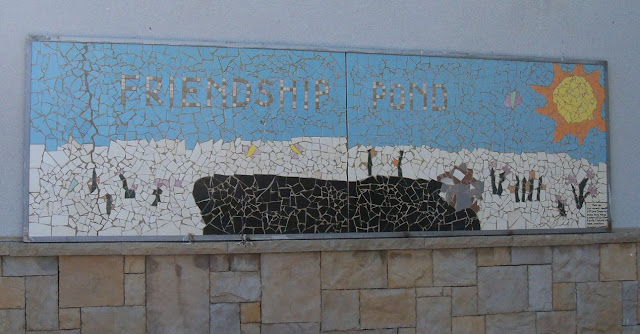 So it's not too arty, but it was an unexpected little surprise, just outside the Nature Center in the park--where you can see snakes, toads, tarantulas, lizards, and more (oh, joy!) as well as skeletons and a stuffed owl and raccoon. 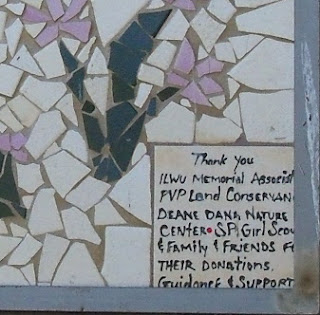 The only tricky part of visiting this place is that the access road (just off 9th Street, just west of Western Avenue) is closed off at sunset each night.

Deane Dana was the County Supervisor when the Nature Center was built, and when this mosaic was installed--hence the dedication in the right lower corner. This is actually the Deane Dana Friendship Park and Nature Center.

And the views--of the entire Port of Los Angeles, north to the San Gabriels, and of Rancho Palos Verdes, are beautiful. We watched bunnies and ground squirrels, circling hawks, and noisy finches and crows. Plus saw a lot of couples dancing without music.

Posted by Vickey Kall at 3:48 PM No comments:

Running down stories and events about Los Angeles history used to be a nice respite from other activities--but lately, I've been planted in front of the computer doing research all day, so more research no longer qualifies as a break.

Instead, today my break was a walk at Peck Park with the dog, where I listened to a few lonely crows (at least, they sounded lonely), took pictures of lizards that didn't turn out, and one of the port that did. 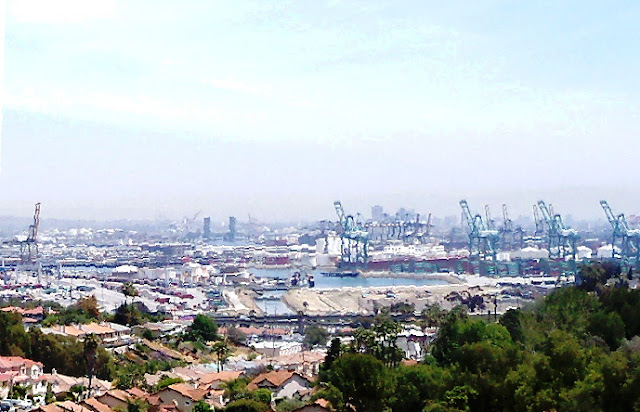 I can, however, point to some new accomplishments:

The release date for the Boomer Book will be in September. And if anyone has a pictures of their bicycle from the 1950s or 1960s--with or without you in it, as long as the pictures is yours to control--I will give you a free book if you let me use it (with thanks and attribution, of course!)

If you're interested in Boomer trivia, check out my newish blog at Boomer Book of Christmas.

Posted by Vickey Kall at 3:10 PM No comments: