According to the Jewish Journal, who quotes a soon-to-be-released (well, October) book by David Sax (of Brooklyn!), LOS ANGELES HAS THE BEST JEWISH DELIS IN AMERICA! Yeah!

As the JJ notes, Pulitzer-prize-winning food critic Jonathan Gold proclaimed the superiority of L.A.'s delis way back in 2002, qualified with a "I think." But what Gold thinks, therefore exists in truth.

Back to David Sax. In his upcoming book, Save the Deli, he claims delis in NY have become touristy, and he thinks that delis in most cities are in decline. Not so in L.A., though, where he mentions Nate 'n Al's, Art's, Canter's, Greenblatt's, Junior's, etc. as bigger, more comfortable, and "ultimately serv[ing] better food than any other city in America." Woo-hoo!

The Jewish Journal has a five-minute-plus video titled "A Day at Canters" if you're interested. Canter's has been in L.A. since 1931, and at its present locale since 1953.

Posted by Vickey Kall at 1:15 PM No comments: 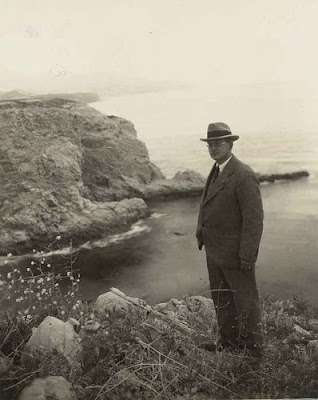 By a stretchy coincidence, the day before I took the July 21st picture (previous post) looking toward Portuguese Bend in Palos Verdes, a regal lady passed on who personified the history of Palos Verdes. A long time ago (1946) Elin Brekke, a secretary from Norway, married the son of Frank A. Vanderlip, Sr.--the man who pretty much 'created' the tony peninsula.

Elin died Monday at the age of 90. She was quite a character. Her autobiography is titled Eccentric, Obstinate, and Fabulous--not an idle boast. You can read John Bogert's tribute and see a picture of her at the Daily Breeze site. I learned there that Elin raised money for (among many other things) the restoration of the Queen Anne Drawbridge in Dinan--a beautiful town in Brittany that I've actually visited. . . oooh, I'm getting chills. 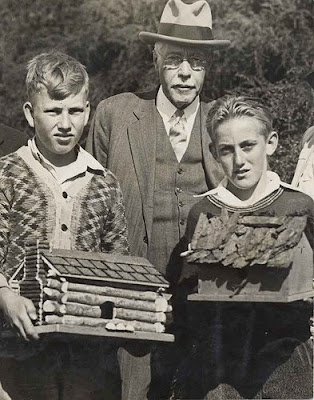 So why is the Vanderlip family important? The Palos Verdes Peninsula was first owned by the Sepulvedas, part of the land granted to them in 1827 by the Mexican government. In 1882, that Rancho was divided and the Bixby family (a big name in Long Beach) acquired the peninsula. In 1913, George Bixby sold 16,000 acres (basically, the entire peninsula) to the president of City National Bank in New York, Frank Vanderlip. It was a complicated maneuver, and you can read all the details at Maureen MacGowan's excellent history site. Bixby kept a thousand acres, which is today's Harbor City.

Vanderlip gathered a group of investors to make something of the place. The top picture at right rather complements the previous post, but it was taken on May 5, 1927. (OMG! May 5 is my b-day...another coincidence!) The man in the picture is landscape architect George Gibbs, Jr. The Palos Verdes Library has a huge on-line collection of pictures that anyone can access.

Here a photo of Mr. Vanderlip himself. The occasion was the Second Annual Bird House Competition at Malaga Cove School in 1931. I thought the kid on the right might be Draco Malfoy, but the library identifies him as Tod Snelgrove. Right. The other boy is Gordon Andersen.

Can it be too hot to blog?

I have been slacking, and I have little to offer--but here is a picture taken from Calle Entradero in Palos Verdes, July 21, around 7:15 pm. 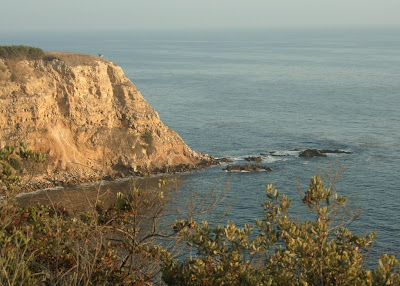 A Debate at the 1960 Democratic Convention 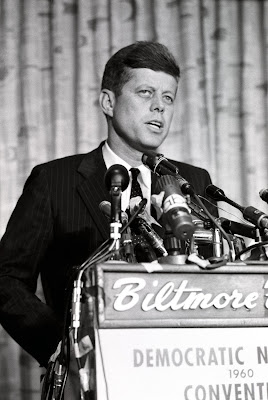 I was saving this picture for July 15th, because that's the date Kennedy accepted the nomination of his party to run for president. But--oops--that speech was given at the Coliseum, not at the Biltmore, 49 years ago today.

Kennedy debated his rival Lyndon Johnson at the Biltmore Hotel during the convention, though--on July 12. (Missed it by that much, and Maxwell Smart would say.) I think this picture is from that date.

The Los Angeles Times reported that the debate turned into "two campaign speeches bridged by admiration, affection and a few padded quips." They were right; Kennedy opened by saying he wouldn't argue with Johnson, because "I don't think we disagree."

Johnson came back with "I can agree with every word Senator Kennedy has said."

The debate was televised, and those present--jammed into the ballroom--included the sizable Texas delegation, so Johnson drew the most applause. That's not the same as winning, though.

Posted by Vickey Kall at 2:31 PM No comments: 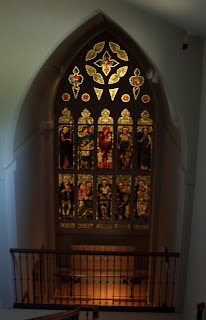 David Healey was the mayor of Heywood,Lancashire, England. Over a hundred years ago, he made a big donation to the local Unitarian Church--a church that his father had helped to found. His donation enabled the lucky congregation to commission a beautiful 15-foot tall stained glass window for the church chancel. The window now bears his name: the David Healey Memorial Window.

Now it sits in the Huntington Gallery. Why? Well, this isn't just any window--Morris & Co. designed it. Morris, as in William Morris, textile and furniture designer connected with the Pre-Raphaelites. Artist Edward Burne-Jones designed the ten panels of the window. It has a big name too: "Humility, Mercy, Generosity, Charity, Justice, Liberty, Truth, Love, Faith, Courage."

Try to think up a mnemonic for that. The David Healey Memorial Window works just fine for me. These pictures focus on Generosity and Charity. 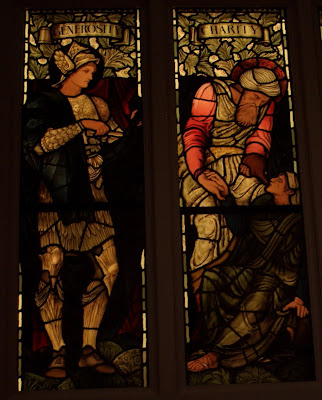 The Huntington Gallery--the 1911 home of Arabella and Henry Huntington--was closed for two years and gussied up at a cost of $20 million, reopening only a year ago. Christopher Knight of the Los Angeles Times wrote a detailed review of the renovated building. I learned from that article that some upstairs bedrooms were removed and refashioned into galleries. The sweeping, dual staircase was enlarged especially so that this stained glass window could be ensconced and backlit. Here's how Knight describes it:

". . . designed by Pre-Raphaelite painter Edward Burne-Jones, [it] is a strange array of Protestant personifications of virtue, cast as secular versions of traditional Catholic saints. Truth holds a candle against the darkness. Faith reaches up to grasp the hand of God. Courage is steeled in armor while Liberty clutches a pair of crimson wings, like an earthly seraph, the highest rank of angel."

Too bad he doesn't enlighten us on the symbolism in Generosity. (Charity, I'm assuming, shows the a 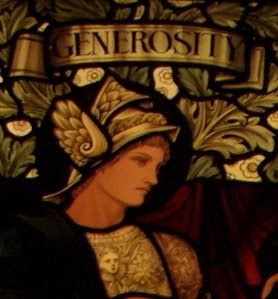 ctions of the Good Samaritan.)

I didn't remember seeing the window before, and now I know why: It was acquired in 1999, from collectors up north in Carmel. The couple who last owned the piece bought it in 1967 from the now-demolished Britain Hill Unitarian Church in Lancashire, England--where Morris & Co. had installed it in 1898.

From what I could glean, the Heywood church congregation merged with other area Unitarian churches, closed the Heywood branch, and sold off what they could, though I'm sure they weren't happy about it. But since the abandoned church suffered through a fire the year after the stained glass window was sold, I guess the tale has a happy ending. The work would have been lost had it not been sold.

Here's an enlarged part of Generosity, so you can see some of Morris' designs in the glass.

Posted by Vickey Kall at 6:32 PM No comments:

Water Rationing is Nothing New

Really. In 1976 London residents, and eventually most of England and Wales, all had to do without well-watered gardens. 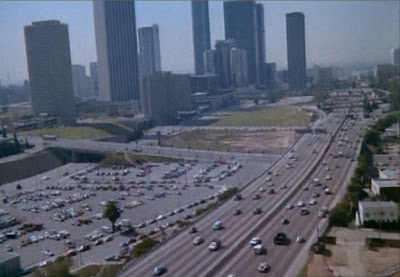 By February of 1977, Mayor Tom Bradley urged Angelenos to voluntarily reduce their water use by 10%, because of a continuing drought. In Northern California, involuntary rationing was already being enforced. In March, Time Magazine was warning of another Dust Bowl ! By April, even San Francisco had tough policies to cut water use by 25%. By May, the L.A. City Council approved Mayor Bradley's plan for mandatory cuts:

And no whining! The Times was quick to point out that residents on Catalina were dealing with reductions of 50%!

That's when we all started filling quart and half-gallon bottles with sand or rocks and putting them in the toilet tank to reduce water there. That's also probably when (I can't prove this) the charming little ditty

If it's yellow, let it mellow,

If it's brown, flush it down!

Bradley was sworn in for his second term as mayor the day after that 10% cut went into effect. And though the new rules came with punishments--a couple of warnings, followed by the cutting off service--I don't think anyone ever had their water cut off for overuse.

In retrospect, 84% of the DWP's 600,000 customers met or exceeded the 10% reduction and kept it up. By March of 1978, when most folks felt the drought was over, water usage was still down 19%. The 10% decrease for residents ended, but the bans against watering the driveways and running fountains just for show remained.

The 1977 drought was far worse than what we face now: back then, we were warned that the Sierra Nevada snowpack stood at one-fifth of normal. In 2009, it's at four-fifths. A Times story last March says the water reserves in 1977 were at 35% of average; this year we're at 70%.

So no worries. This picture of LA in 1977 is from Wikipedia, captured from the opening of CHiPs.

First Reviews of the Jackson Five in L.A. 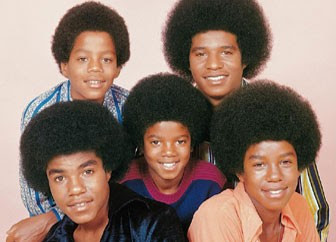 Robert Hilburn of the Los Angeles Times was not overly impressed, although he admitted they "had some good (but too few) moments."

The venue was the Inglewood Forum, where Diana Ross introduced the Jackson Five as an act she had discovered on a recent tour (the official press story for years). She also brought out the Hawkins Singers ("Oh Happy Day") and Edwin Starr ("Agent Double-O Soul"). Starr would hit big with the song "War" in 1970, but this concert was reviewed on August 19, 1969.

Only eight days earlier, according to a Vibe article from last month, Ross had introduced the brothers to 350 media and music people at a disco-type club called The Daisy, on Rodeo Drive in Beverly Hills. They sang and charmed everyone. Regina Jones, who wrote the article, had been in the club that night. She recalls Michael Jackson saying, "After singing for four years and not becoming a star, I thought I would never be discovered—that is, until Miss Ross came along to save my career."

He was ten. Actually, he was almost eleven, but the press was told that he was eight.

The Daisy was also the club where O.J. Simpson met Nicole Brown. She was a server there in 1977. If the address was 326 N. Rodeo, it's an Yves St. Laurent store now--but I'm not sure about the address. The Daisy Club was still open in 1985. Anyone know when it closed?