20th Century Los Angeles on Display at the Getty

The Getty is opening two new exhibits on our fair city, one called Overdrive: L.A. Constructs the Future, and the second on the photography of Ed Ruscha.

Starts April 9, as you can see from the graphic. Here's a paragraph from the description:

Man, why do museums have to talk that way--like they're writing a thesis?

I think that all means there will be huge, wall-mounted pictures, as well as videos and scaled-down models of buildings and/or neighborhoods, and other things...maybe posters, ads, souvenirs, etc., all showing us how fast and furiously Los Angeles grew over fifty years. Big big buildings and Googie-style funky places. Fun, cool, exciting stuff. 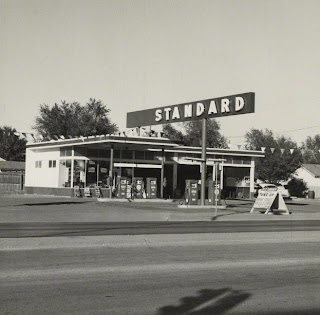 If you're like me and you remember when the Westin Bonaventure cylinders went up, or the Library Tower, or even when the Music Center was built, you'll probably really love this.

The Ed Ruscha photography is called In Focus, and it also starts April 9 and runs through September. Mid-century gas stations, apartment buildings, the Sunset Strip and Pacific Coast Highway--again, for us Boomers, this is cool. Check the site; there are some special Wednesday afternoon "Curator's Talks" scheduled.

It's all a part of Pacific Standard Time Presents Modern Architecture in L.A., which has exhibits in several other museums as well, including the County Museum of Art, the Hammer, the Museum of Contemporary Art, and several others.

The Wilshire Grand Hotel at Wilshire and Figueroa is no more, and in its place we'll have a 73-story office tower, a new "tallest" building-blah-blah. 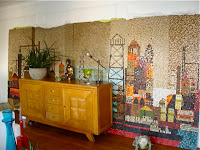 But when auctioning off the art and fixtures of the 60-year-old hotel, mosaics were found!

One 15-foot wide mosaic--and the efforts to identify the artist--is the subject of this story in Mosaic Art Now, written by Lillian Sizemore (who in this case has the title of Chief Investigator).

The found mosaic shows oil refineries, the Port of Los Angeles, and tall buildings. Lillian Sizemore is a noted mosaicist herself who has taught classes and lectured all over the world.

"The glass tiles were covered with layers of cigarette smoke and years of yellowed funk," Sizemore writes. Not only that, but the mosaic was not grouted. Instead, the artist just used glue to affix the pieces of tile to plywood--so while the artist, as an artist, was clearly talented and trained, he/she didn't know much about mosaic construction 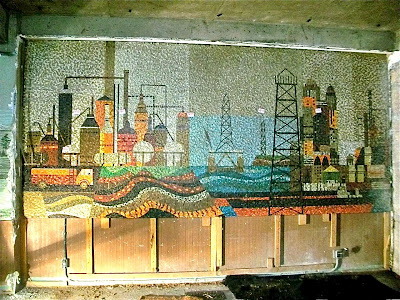 The story's called "Black Gold: There's Oil in Them Thar Walls" because the mosaic was found behind a wall in a conference room that once housed the Los Angeles Petroleum Club, and is clearly focused on the oil industry.

Sizemore's article puts it all in context, with a bit of history about the oil business, the hotel, and mid-century mosaics.  Go read it!

Gregory Johnson bought the mosaic; figuring out how to get it out of the hotel and clean it up presented many puzzles. And who created it? Johnson eventually found a signature, but that just brought up more mysteries.

These pictures were taken by Gregory Johnson and used in Lillian Sizemore's piece; via MosaicArtNow.com.

The article has many more photos,  including shots showing the state of the mosaic when it was uncovered, how it was put together, removed, etc--there's even a 9-minute video of 1985 panels and walls being removed to (hopefully) reveal more mosaics in the lobby. Did they find any? Did Geraldo find Al Capone's loot? (a running joke in the video)

A gentleman named Tom Barnes has also put a couple of photos of the mosaic up on Flicker. He apparently went to the Wilshire Grand liquidation sale and snapped pictures before the mosaic was sold.

And there were also huge abstract mosaics on the hotel lobby walls--Sizemore's article has a 1950s newspaper photo showing them in black-and-white. 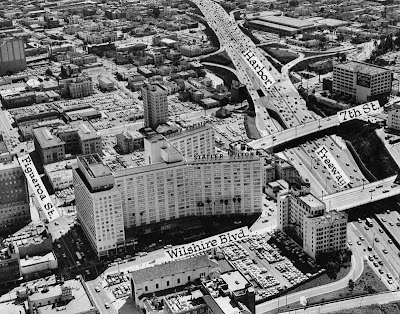 In 1960, the Statler-Hilton was the one of the hotels housing delegates of the Democratic National Convention. Not the main venue, of course--that was the Biltmore and the Sports Arena. The Herald Examiner newspaper printed this graphic showing the location in July 1960, and the pictures comes from the Los Angeles Public Library's photo collection.

The Statler Hotel opened in 1952, was the Statler-Hilton by 1960, then the Omni, and Wilshire Grand.

BlogDowntown has a synopsis of its history, written in 2009, here. And if you want to know about the Statler Hotels in general--the major hotel chain of the early 1900s, check out Wikipedia.

Here's another photo I can't resist, dated October 28, 1957, also from the  Herald Examiner via the library, of a "Welcome Dodgers" party. Among the sampling of 1100 guests in this photo are Mayor Poulson and Branch Rickey. 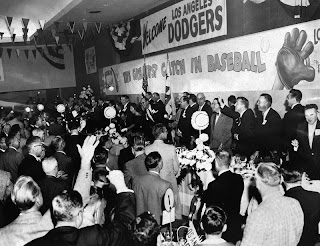 Every time I see one of these old photo's, full of civic pride, I think, "Hey, where are all the women? And people of color?" Which is a measure of how we've changed, and that's all to the good.

I'm not sure, but I think a bit of the abstract mosaic may be visible on the left wall, which is the real reason for putting the photo up here.

Just a guess; who knows how many mosaics were in the place, when they were removed, or where they ended up? There is a law in place now, giving an artist first dibs on her/his work when a building owner decides to remove art, but that law wasn't in place in the 1970s and early 1980s. 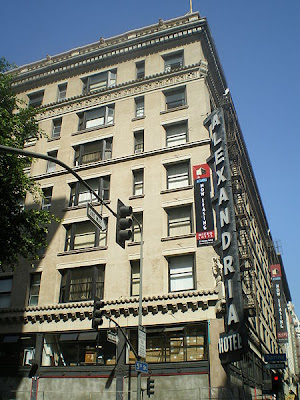 The 107-year-old Alexandria Hotel holds some secrets. I've written about the hotel's history--a rich tale, because this is a place where Charlie Chaplin once lived, Gloria Swanson married, presidents and world leaders stayed, and early Hollywood moguls struck deals, etc. And it has a ghost, rumored to be no less than Rudolf Valentino.

That's all in the first century, of course. What is unique about the Alexandria is that it enjoys a second century--in Los Angeles, that's an anomaly.

(picture at left and below are from Wikipedia, btw. For some neat "then and now" pictures, go to Bryanat Arnett's site.)

In its second century, The Alexandria Hotel has been a film location for the Spiderman movies (because it does look like New York, which has many old hotels) and has been subdivided into micro lofts (learn about that here) (I guess that means it's no longer a hotel, since ALL usable rooms have been converted).

But did you know there's another unused wing of The Alexandria, a seven-story wing that was shut up in 1934 and has sat abandoned ever since? And that wing has a new owner who is planning to bring it back to life. 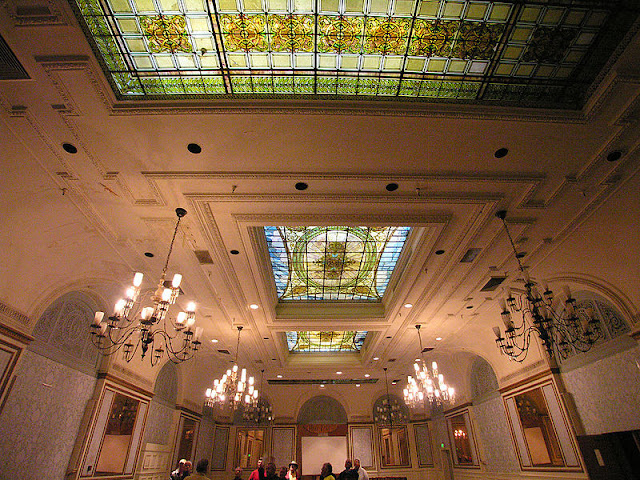 The picture above is of the Palm Court, dating back to the glory days of the hotel. It's amazing, isn't it, that the stained glass survived? But as the hotel got run down, this became a room that no one used, so it was pretty much left alone--except for boxing matches.

Seriously. There's an incredibly detailed and well-cited article on the Palm Court, including a list of the notable events that took place there, on Wiki.

Anyway, back to the new owner of the boarded-up section:

The owners are an investment group represented by Nick Hadim. He is not an investor, though. Hadim will be renovating an unused, abandoned wing of the Alexandria. A flurry of articles just before and after last Halloween (2012) reported on this. You can read about it in: 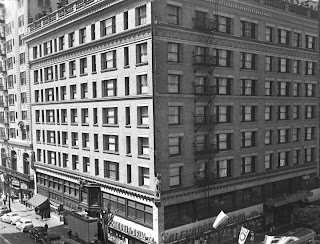 Basically, Hadim's investors bought the wing for $2 million and plan to create luxury apartments in it. (The original Alexandria are micro-lofts, remember? Teensy. Only the very largest have a bedroom!) And he wants to add a two-floor subterranean nightclub.

My snide comment that I can't stop myself from typing: Everyone who can afford at least $1700 a month for a small apartment and wants to live on top of a noisy, trendy night club and look out the window to see people puking, raise their hand!

The new wing will be called the Chelsea Building, and Hadim is planning to spend $3 million on it. He'll have to add elevators and stairs, because none exist in this wing--which is actually an annex, added to the hotel in 1910.

Seven floors and no stairs means that Hadim's investors bought the joint more-than-half sight unseen. The first, second, and seventh floors are the only ones he could access.

The picture above at right, from our LA library's collection, shows the hotel in 1950. The wing/annex/slice in question is out of sight--it would be about 20 feet to the right or the right edge, I think.

The 35 new apartments planned will all be under 700 feet, and Hadim announced a rental price of $2.50 per square foot. All pending permits, of course. So even though the PR refers to them as luxury units, the luxury is not in space.

I really want to see how this all turns out; the renovations are supposed to be done by the end of this year.

Some links to LA History Stories 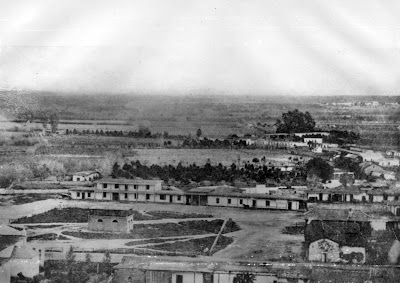 Here are some excellent Los Angeles history stories for your enjoyment. I find myself sooo short of time these days (a common complaint with everyone, lately) so once again I am sorry I'm not posting more. The good news is--other people are posting, and they've got some great stuff up!

So in no particular order: 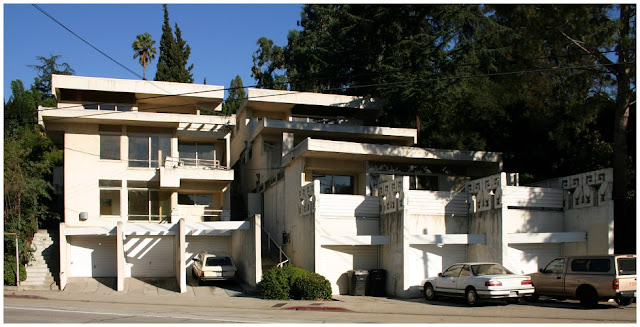 Posted by Vickey Kall at 1:36 PM No comments: 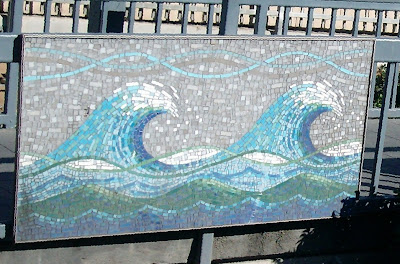 Today's mosiac is at the Blue Line's Artesia station on Acacia Blvd. in Compton.

Artist Lynn Aldrich installed  "Blue Line Oasis" in 1996, and besides the mosaics, the artwork includes etched concrete and posts with ceramic tile messages from the community.

Why water images in Compton?

"The area is well-known for its artesian wells, a well that reaches surface through it's own pressure," said Aldrich, who often uses water in her artwork as a metaphor for life and energy. "I thought that was an appropriate metaphor for urban experience and our constant striving for renewal." 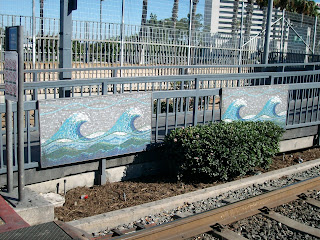 This post from the SubwayNut has many more pictures, though they are of the station and tracks, not of the artwork.

There's even a Pinterest page for Blue Line Oasis. Pinterest . . . (Downton Abbey fans, remember when the Dowager Countess sat on a chair with rollers (in 1920) and nearly screamed when the chair moved? And when she was told the chair was from America she said, "Why is it that everyday involves a fight with an American?" I know how she felt. Why is it that everyday involves a new social media platform that must be investigated lest I be labeled obsolete?) 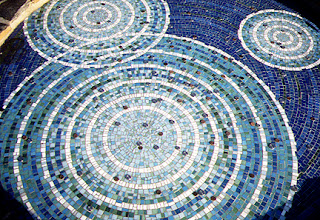 Lynn Aldrich's own website has pictures of mosaic and sculpture, all of it bright and full of movement, and pipe-y. The Los Angeles African American Museum is featuring her work "Go Tell It On the Mountain" through April. Aldrich matriculated (love that word) at the Art Center for Design in Pasadena. Currently, she teaches at Azusa Pacific University.

To the left is the wishing well feature and a close up of the well, with coins. But not real coins--these are part of the artwork. 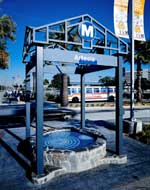 These pictures come from the Public Art in LA site, except for the last one that shows the wishing well at the entrance to the station. That accompanied an article in Aqueduct Magazine, December 2001.