Today's mosaic is an opportunistic piece. p I was going to point out that the Norton Simon Museum facade is, in fact, a mosaic. It doesn't portray a landscape or person, but it is tile arranged artfully, right? And it seemed appropriate, two days before the Rose Parade which goes right by the building.

Technically, though, I don't think it's ever been referred to as a mosaic facade, and I was saved (actually, you were saved) from this slip into New Year non-mosaic-ness by the simple fact that some friends invited me to Parkers' Lighthouse in Long Beach for a Goodbye 2013 luncheon.

And Parkers' Lighthouse has beautiful mosaics adorning its lobby. 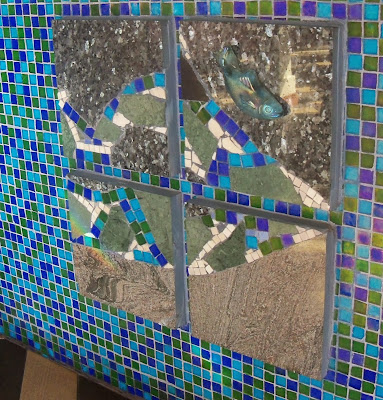 This is one set, at left. They are under a chrome counter, and I moved a bench to take this picture. Next to it is another quartet of mosaics, but an easel and daily specials where there and I didn't want to cause too much trouble.

Rather amazing, and I could not find anything about the artist. But here is a close up picture of the fish on the upper right panel. 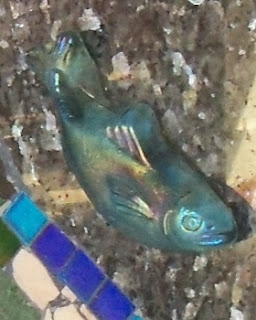 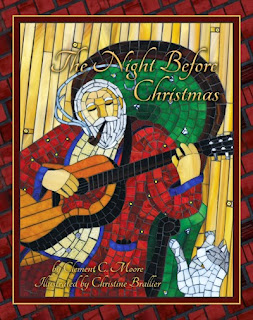 Went looking for a Christmas-themed mosaic for this week--and found this lovely book of mosaics designed to celebrate the poem, "The Night Before Christmas."

The mosaics are by artist Christine Brallier, and the book can be bought here at Brownian Bee Press for the exceptionally low price (imho) of $16.99.

Holy cow. I know what it costs to produce a full color book (albeit mine is about 8 times bigger, at 250 pgs).  This is a bargain. 15 glass tile mosaics are photographed in the book--here's a shot below of the mosaic itself, not just the cropped version on the cover.

Technically I believe Brallier is in the Santa Barbara area, out of LA County. But she was raised in Los Angeles and went to school here.

She's done an installation of mosaic panels titled "The Joy of Life" at Rhoads Park in Santa Barbara, and has designed public art at locations in Texas and Kentucky, and even a Steve Irwin tribute mosaic in Australia. You can see pictures of all those at her website. 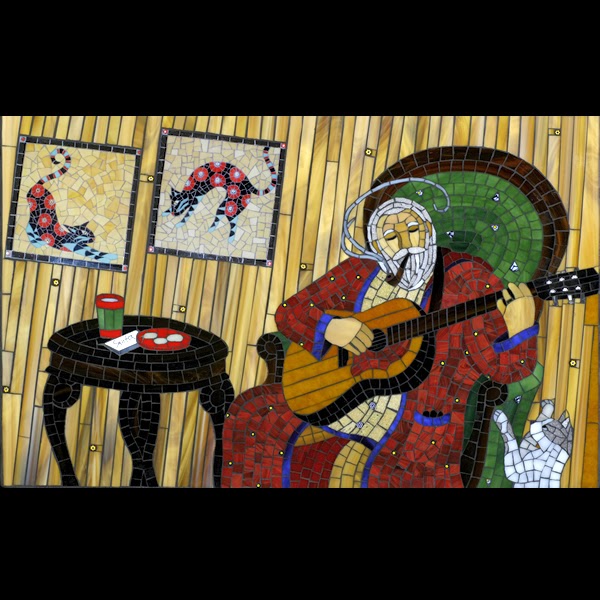 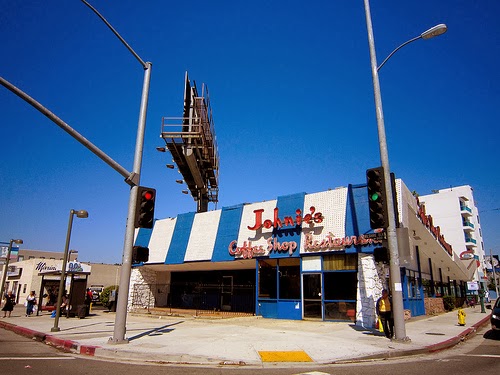 First, Johnie's Coffee Shop on Wilshire has been declared a historic-cultural landmark.

I have two standout memories of Johnie's. The first was in the mid 1970, when I had an hour to kill between job interview downtown. I was lost--the building on Wilshire are nothing if not intimidating to someone who's never worked there. Johnie's was the friendliest looking place around. Big blue and white roof (I didn't know Googie from Gaga back then), totally unsophisticated and unlike all those skyscrapers with their tinted glass windows. I sat at the counter and drank coffee.

The second memory is of the movie Miracle Mile, which I loved. In that film the early morning crowd--really early, like 3 AM --doesn't believe a guy who comes in, all shaken up, saying he just heard that nuclear warheads are heading toward Los Angeles. Until Tasha Yar (well, the actress Denise Crosby who will always be Tasha Yar to me) uses a gigantic cell phone to call her friends in DC, only to hear that they're all getting out of town. And things go downhill from there.

Johnie's has been closed since 2000, but gets leased out for films. I'm told bits of The Big Lebowski and Resevoir Dogs were filmed there as well as several music videos. (Lebowski also filmed at Dinah's in Culver City).

It opened as Romeo's in 1956, but its location was under consideration as a Purple Line Metro Construction staging area, according to the LA TImes. Now, they're talking about it reopening when the Metro Station is up and running.

Timing is everything, and my timing was off. I drove by the art today and this is what I saw.

Since there was some scaffolding in place on the upper floors of the building as well, I'm assuming the artwork is being protected against stray spritzes from either a texture or paint coat. 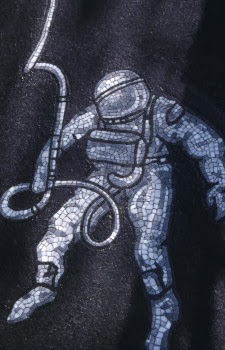 Well, it's got mosaic elements like this astronaut, but it might be more properly called a sculpture.

However, Ned Smyth, the artist and creator, refers to it as a mosaic of steel, stucco, stone, and glass, so who am I to argue?

Smyth created this work, titled "The Dream of Simultaneous Connection,"  in 1996. It stands in Victory Park in Long Beach, which is in the downtown area, just off Ocean Blvd.

There's a picture of the "Victory Park, Established 1899" sign on this blog, which is interesting in that it's the blog of someone who was--at least in 2010--homeless. And it has many links to blogs of other homeless people, resources, and more. Which probably shouldn't be surprising to me--who says a homeless person can't blog on a phone or an iPad, after all?--but it is.

We don't have much more of Ned Smyth's work out here because he teaches and works in the New York area. And he does not confine himself to mosaics. But here is a photo of a mosaic he did for the entrance of a Firehouse in Queens, just off the Long Island Expressway. It's from the I'm Just Walkin' blog.

Back to Victory Park in Long Beach.

The park itself was named to honor the veterans of World War I, back in 1919, but the original land was deeded to the city in 1899 by the Long Beach Land & Water Company to settle a lawsuit.  The land was actually part of a bluff back then. Today, it's a long, 4-acre stretch along Ocean Blvd, intesected by several cross streets, and it looks more like stretches of lawn than a park, and it sits in front of towers,condos, and office suites. Any vestige of a natural bluff is long gone.

The art pictured here is between Linden and Atlantic on Ocean--in front of the Harbor Place Towers with the helipad on top. 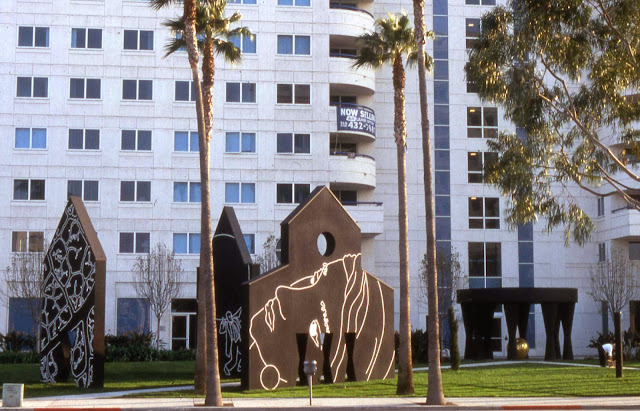 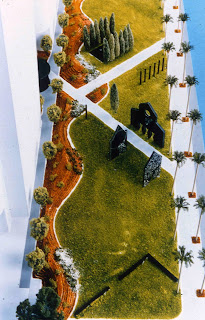 You can see just how large and spread-out an installation this is in this picture from the artist's own website. The pillars with the big gold ball--which is also a mosaic, as it's covered in gold tile--are part of it as well. As is another element out of sight, to the right of those pillars. There are a couple of lines of cedar (I think) that outline a slab, and on that slab is more white mosaic pictures.

In the model at right, also from the artist's website, the slab and trees are the topmost feature.

Here is what the Arts Council of Long Beach says about the artwork on its site:

"Smyth's sculptures remind us of the sometimes confusing daydreams that we all experience. Steel, stucco, stone, concrete, glass, and gold-leaf mosaic have been used to create a fantasy environment Three independent facades suggest the silhouette of a dismantled house with white outlines of various images decorating each wall. At first glance, one is greeted by a profile of a woman's face, resting her head on the grass. Her expression is calm expression, as if daydreaming. Adjacent is a figure back flipping into space, an astronaut, an owl in flight, a man in a suit lifting an enormous hoop and a girl in a bathing suit balancing on a ball. Four black columns stand to the right pointing towards a rotunda containing a large mystical sphere brilliantly covered in gold tile."

Posted by Vickey Kall at 5:22 PM No comments:


This is a clip from an upcoming documentary on Johnny Martinez--to be shown Thursday, December 12 at 10:30 pm on the ARTBOUND show. For those of us in Los Angeles, that will be on Channel 28, KCET.


The producer, Roland Aquilar, is a high school friend of mine who made the documentary after meeting Martinez being invited to dinner with him. He asked about making a documentary of Martinez' life, and this is the result.

I found a 1993 article in the LA Times celebrating Martinez, saying that he'd been performing three to five nights a week with his 10-piece band, Salsa Machine, for about 35 years . . . in '93. One of his regular gigs was at the time was the Sportsmens Lodge in Studio City, but he was also at the Quiet Cannon in Montebello and other places.

You'll have to watch the documentary for more!

Posted by Vickey Kall at 2:46 PM No comments: