The Lassie House in Pomona

This historic, rebuilt and restored home will be dedicated in the afternoon of July 1, 2018, so you still have time to rework your schedule. The address is 1195 Washington Blvd in Pomona. 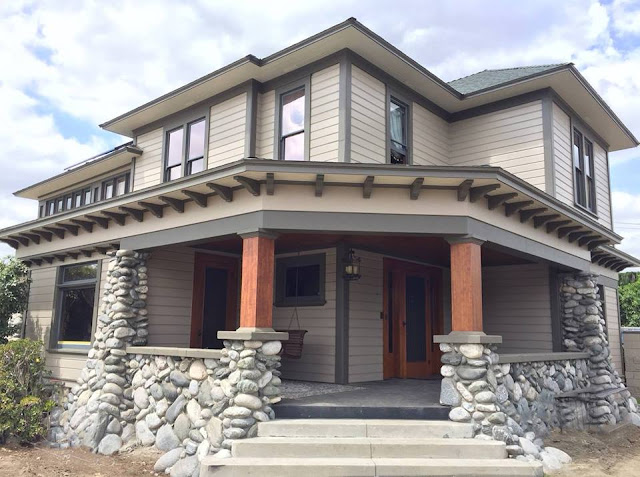 It IS a lovely house -- all that river rock and the craftsman touches. 7000 square feet, 8 bathrooms and 8 bedrooms (huge, huh?) and built in 1900.
It's owned by Ray Adamyk, who heads Spectra Company and owns the YMCA of Pomona, which he's also restoring.
Why is this called the Lassie House? 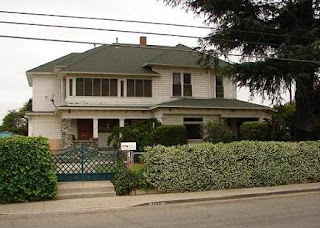 It's because of Timmy. If you remember the Lassie TV series, Timmy was played by Jon Provost from 1957 1950s to 1964. As the Facebook page spells out, this was Jon Provost's home once.
At the right is the house in 2008; clearly, lots of work has been done. In fact, older online MLS listings say it had five bathrooms and six bedrooms, and much less square footage.
When Timmy joined the Lassie cast in 1957, the Provosts had to go to a neighbor's to watch it -- they didn't own a TV yet. (Although Lassie had debuted in 1954, different actors played Lassie's family. In 1954, the cast changed and Lassie became Timmy's dog. 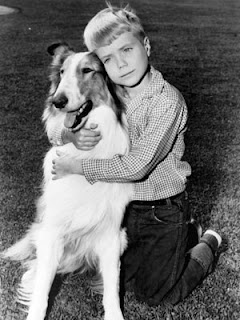 According to Provost's own website, the checked shirt and bluejeans he always wore in the TV show (one set of them, anyway) is in the Smithsonian, next to Archie Bunker's chair.
Back in the 1950s,Provost's father was an aerospace engineer at the Convair Division of General Dynamics. The family moved into this home when Jon was four, and moved out to Beverly Hills when he was nine -- after only two years on the TV show. . (People Magazine says Jon and his Mom moved; Dad and siblings stayed in Pomona.)
By then Jon Provost was Timmy Martin to everyone in American ... Let's face it, he's still Timmy Martin to all of us. His role ended in 1964, but the Lassie show continued, with different stars and scenarios, until 1973, nearly 20 years.

The Dude in Pixelated Mosaic Glory 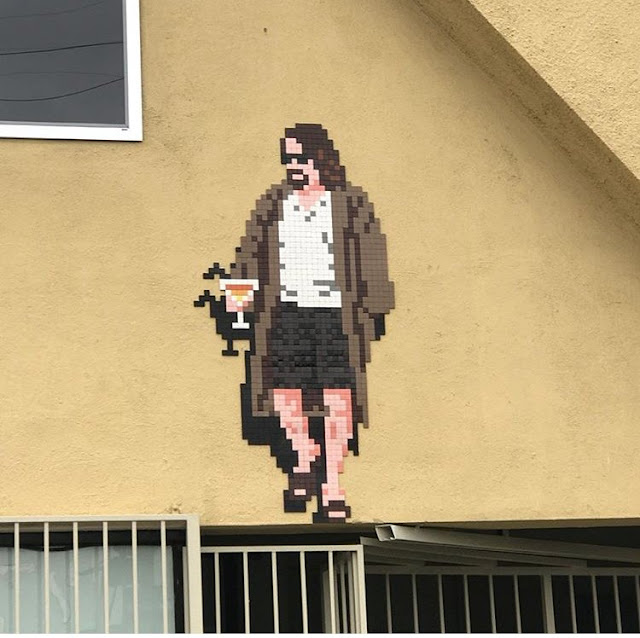 The artist is called Invader, and you can read his Wiki bio here. Where is this? Near as I can tell, 356 South Vermont. 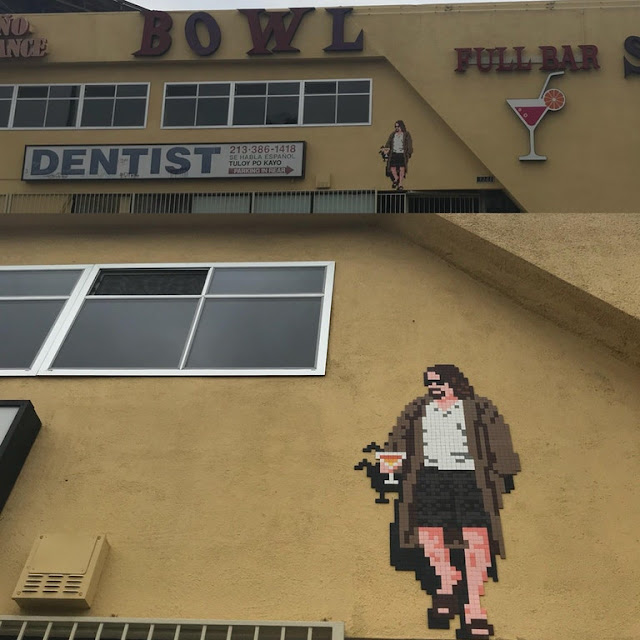 Pelicans in Trouble in the South Bay 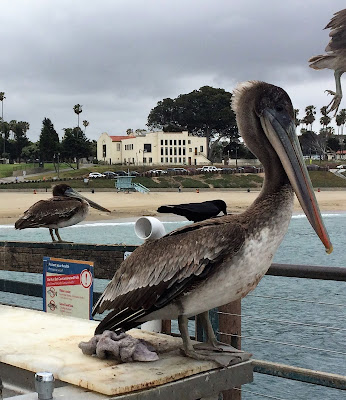 These pictures were taken at the Redondo Beach Pier last Sunday. You can see the old library, now a Veterans Park Center, in the background.
Last week, a flurry of news stories appeared about sick brown pelicans. Here's the article in The Daily Breeze, pointing out that the International Bird Rescue of San Pedro had 32 pelicans in their care.
Local radio stations also talked about the pelicans; speculating that the fish population ain't where it should be, and the birds are starving. Older, more experienced birds are suffering.  They are cold and emaciated when rescuers get to them. The birds should be eating up to six pounds of fish a day.
Disoriented birds have stumbled in to back yards as well. Here's the phone number of the International Bird Rescue:

310-514-2573.
There's even a story in the NY Post about our pelicans. Apparently, a couple of the birds dive-bombed a graduation ceremony at Pepperdine University last month, and that got a lot of attention and tweets. 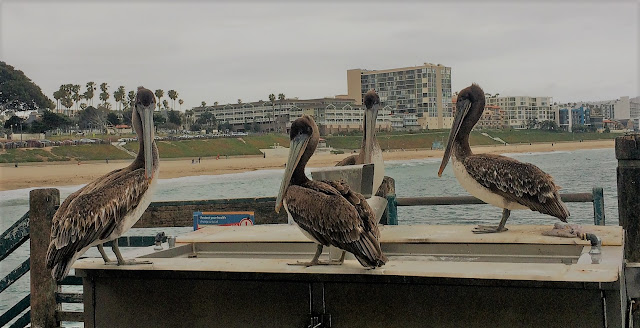 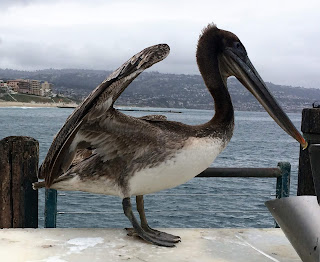 What does one call a bevy of pelicans? I just looked it up. They can be called a brief, a pod, a pouch, a scoop, or a squadron.
I think squadron has the most gravitas.
A similar pelican sick-in happened a few years ago, with even worse numbers. Ill, listless pelicans settled along the eaves of the restaurant at the end of the pier, dozens of them. Rescuers were taking only the weakest, because they were so overwhelmed and did not have room to care for all of the pelicans.
They hang around the pier looking for handouts from fishermen. While I wouldn't recommend that anyone try to get too close, you can tell by these photos that the birds were not shy or worried about people. 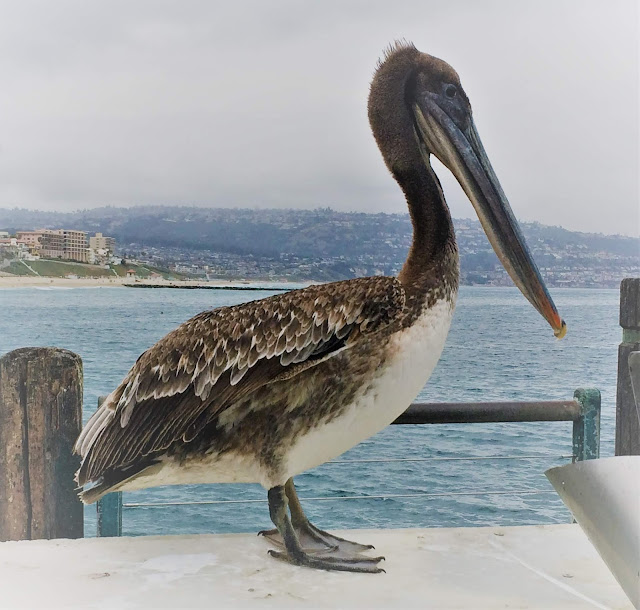 Email ThisBlogThis!Share to TwitterShare to FacebookShare to Pinterest
Labels: Birds

It's almost Monday, and I came across two mosaics this weekend, both on the same block in Redondo Beach. The street is The Esplanade, so directly across from these mosaics is the beach itself. 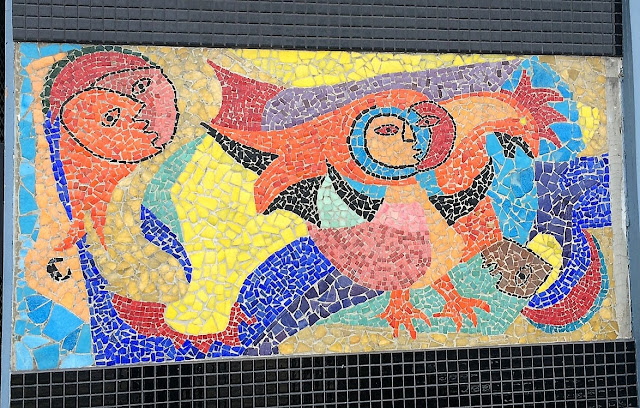 No information on the mosaics, how old they are or who created them. They are on private property, but outside, not at all hidden. 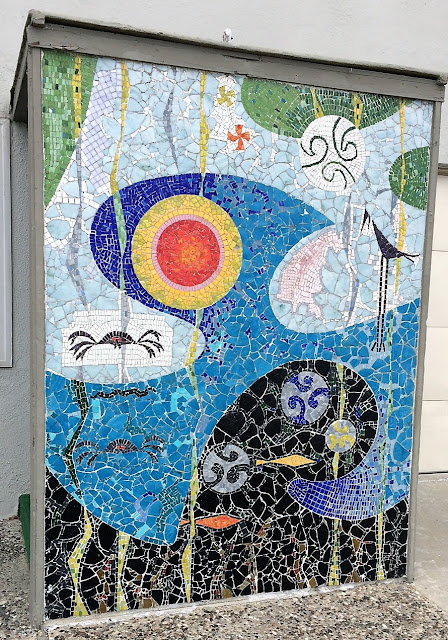 Email ThisBlogThis!Share to TwitterShare to FacebookShare to Pinterest
Labels: mosaic 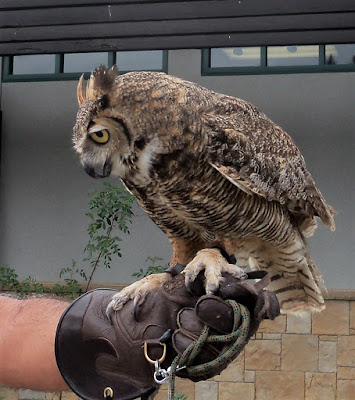 There are around 650 licensed falconers in California, mostly members of the California Hawking Club. They take their birds of prey out to hunt, and have to purchase hunting licenses for anything that they birds might possibly catch. If the falcon grabs a kangaroo rat or other endangered species, the falconer must step in and distract his or her bird with a chunk of meat and get it away from the prey--even if it's already dead.
The term falconry covers the care of owls - like this great horned owls - and hawks, as well as merlins and falcons..
Having seen great horned owls in the eucalyptus trees at twilight --and did you know they bob forward when they hoot? -- I was truly surprised that this guy looked half the size of the ones in the trees. I was told that the females are much larger, so it's probably females that I've seen.
Another thing about hawking in general: the birds' habitats are subject to inspection and have to meet many regulations. If a falconer wants to go on vacation ... well, he or she had better have some really good friends willing to weigh, feed, and care for the birds every day.
I had no idea that falconry was such a demanding hobby - a life-style, really. 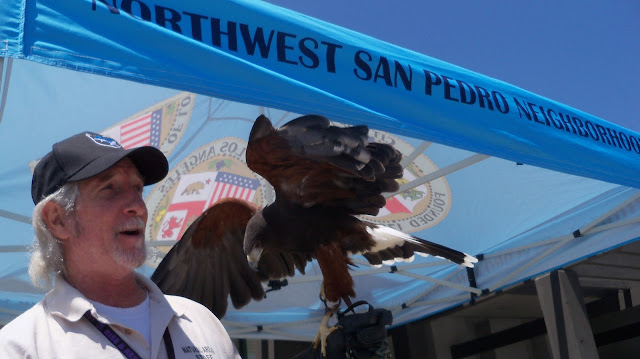 I learned all this from Frank Hoffman, an officer of the California Hawking Club, who brought a Harris Falcon to Deane Dana Friendship Park in San Pedro He comes out there every few months and probably goes to other parks as well. 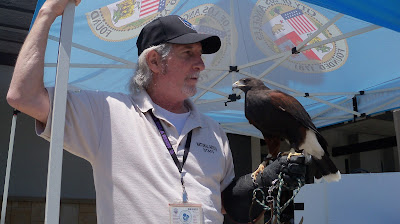 These raptors are stunning up close. We see red-tailed hawks circling over canyons and occasionally striking a pose at the tops of trees. Once in a while I'll see a falcon perched on a street lamp or freeway sign, or a Coopers Hawk diving at another bird. But unless a pair of high-powered binoculars is at hand, most of us rarely get a chance to study their beaks and eyes and very intimidating talons.
They weigh around two pounds or less, as big as they are.
So that's all I've got. If you see a flyer at your local library about a talk on Falconry, you really should take the opportunity to see these birds and talk to their handlers. It's a look into another world.

Posted by Vickey Kall at 3:30 PM No comments: