More Millard Sheets (Did he give us the birds?)

This beautiful mosaic sits over the entrance of the Wells Fargo Bank on Torrance Blvd., just west of PCH.  My guess is that the SH is Millard Sheets' signature. (You can just see it in the second shot, bottom left corner.) 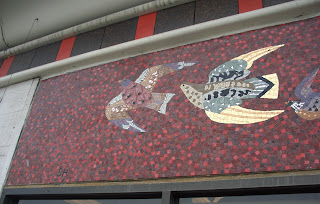 But that is a guess. The branch manager was kind enough to offer to check and find out if this is indeed a Millard Sheets mosaic. 'Twas a gray day to begin with, so these pictures are not the best--but I believe the mosaic is in need of some TLC. Some of those red pieces near the bottom are looking a bit ragged. Redondo Beach has a Historical Society--wonder if there's any chance of getting the mural restored, as happened in Palos Verdes?

Friend Judy, who once worked at the Los Angeles Main Library, pointed me to a Smithsonian site that has an online finding aid to the contents of the Smithsonsonian's collection of Millard Sheets & Assoc. documents, project notes, sketches, etc. Boxes 12-14 are specifically labeled Home Savings, and list all the cities. I don't see Redondo on there.

What Building Is This? Wilshire and Cochran 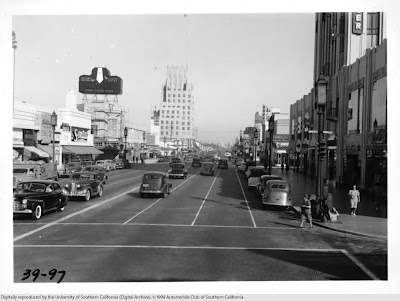 There be a lovely art deco building on the South side of Wilshire, in the block east of Cochran. This is a picture of it in 1939courtesy of USC's Digital Library. The building is on the right or south side of the street.

Cafe Flourish sits in a street-level storefront in the middle of it, and I had the most wonderful grilled cheese sandwich with a side of tabouleh there last week.  The food's fantastic, go visit! In the interest of history, I will note that in 1954 a Boulevard Stationers occupied that particular spot, with a phone number of York 7117. In 1959 that address--5406 Wilshire--became the headquarters for the "Re-elect City Councilman Harold A. Henry" campaign. Isn't this fascinating? Aren't you glad you checked in today?

Henry won that election, btw...and just about every other one. He was President of the LA City Council when he died in 1966.

In October 1931, Myer Siegel opened a clothing shop covering two-thirds of the second floor of 5400 Wilshire, in the "Dominguez Wilshire Building." Hey, that must be it!

The only thing that comes up in a search of the Los Angeles Times is that the Dominguez Wilshire Building was sold for a cool million in early 1958, by one Alexander Haagen to a Dr. John Martin Hiss. 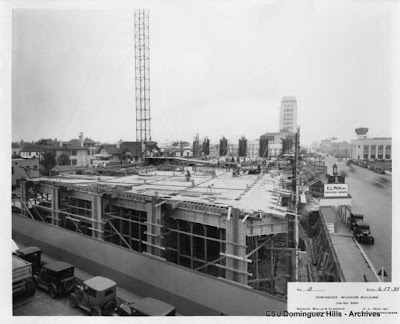 There's a great photo of it in modern times on Flicker.  This photo, midway through construction, is from CSUDH's Archives, the Rancho San Pedro Collection.

Not All Mosaics are Works of Art 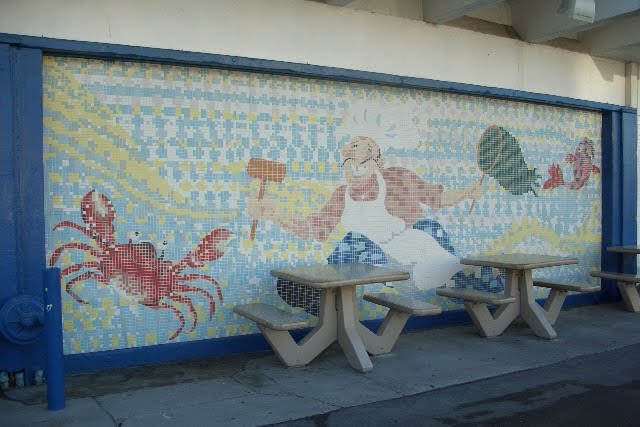 This adorns the exterior wall of the Fun Fish Market in Redondo Beach. I suspect that the word "fun" has a slightly different connotation in Korean than in English. That's my explanation of why a warehouse-sized counter-service restaurant with huge lobster and crab tanks would call their place "Fun Fish Market." Arcade games do not line the walls, nor are there strolling magicians blowing up balloon animals for the kiddies. I suppose cracking open crabs can be considered fun...especially if one is properly primed with beer. But all in all, Fun Fish Market seems a very odd name.

As for the tile mosaic, I have no idea who designed it. A "faux mosaic" of a giant crab lines a wall inside the restaurant. Looks to me like a gigantic decal laid over pipes and anything else. Here's a shot. 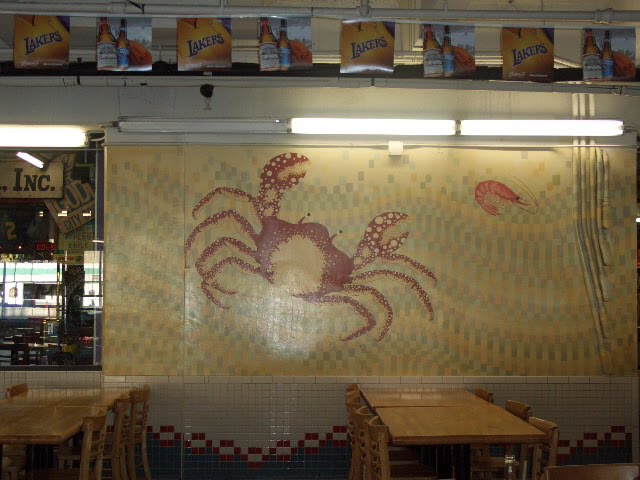 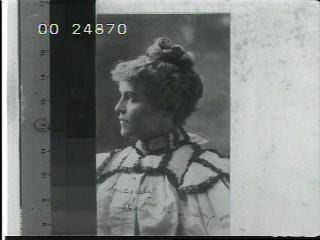 Out of curiosity, I Proquested the word Vaudeville to find its first mention in the Los Angeles Times. The result: January 3, 1885, in a blurb describing "vaudeville actress" Katie Putnam, who was coming to the Grand Opera House. Most of the article was a quote from a Memphis review, with phrases like: "Piquant in style...she trusts entirely to her histrionic and vocalistic powers to secure the admiration and applause of the audience."

Hmmm...shouldn't that be vocalistical? People sure talked funny back then.

I found references to a Katie Putnam Troupe in the 1870s or even earlier, but I don't think that's her. Too old. Maybe a relative?

The San Diego Union reviewed her in 1897 as a "charming little commedienne, singer, and dancer."

Aha! Here's a picture from 1911, owned by the University Libraries of U of Washington. 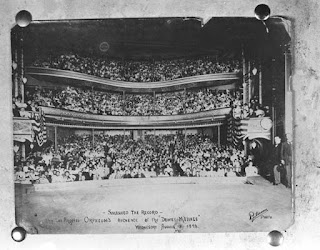 None of which has anything to do with anything. Skipping through old newspapers and the Los Angeles Public Library's online picture collection is just a lot more fun than watching people suffer on television. 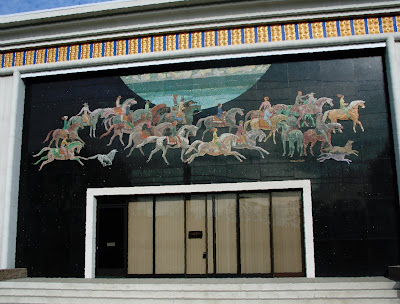 After months behind a plywood facade--which was making folks verrrry nervous, I can tell you--the restoration of the Millard Sheets mosaic on the Palos Verdes branch of Chase Bank is now viewable again. An' it's really purty.

Here's a blurb on the unveiling from the PV Peninsula News. Rebecca Villaneda writes that the mosaic was designed by Sheets and executed by Nancy Colbath and Denis O'Connor in 1974. Villaneda interviewed Sheets' son Tony, and went into great detail about the restoration. In this case, it appears that Chase Bank worked closely with Tony Sheets to conserve the artwork.

I hope that cooperation will be the norm from now on. Public art enhances businesses and delights their customers; defacing or removing it can only create loss. 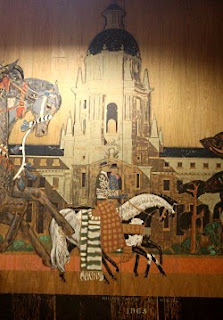 My last mosaic post referred to a foiled attempt to paint over a Millard Sheets mural in a Pasadena Chase Bank. I've since found a month-old story in the Pasadena Star News warning that the mural was in danger, and that a new home for it was being sought. Seems Chase Bank wanted to remodel the lobby to "make it consistent with its other branches."
This is the mural, 50 feet high on fifteen walnut panels, taken by the Star News' photographer, Keith Birmingham. I hope they don't mind that I display it here.

Look at that and tell me--

Are the Chase Nabobs Nucking Futs? Would the Louvre trash the Mona Lisa to make that room consistent with other rooms? Chase has a work of art in their lobby and they'd just as soon dump it to make their impersonal branches all look the same? I don't know whether to move my account or vomit. Maybe I'll do both.

Chase Bank, get a clue! You are the custodians of public art! You are answerable for how that art is treated. Don't act like ignorant vandals sacking an abandoned town! If none of your execs know how to appreciate art (although I doubt that is true) the least they can do is exercise a sense of responsibility!

Posted by Vickey Kall at 7:09 PM No comments:

ON January 10, 1910, the first Air Show in the USA took place right here in Los Angeles. Dominguez Field--now the site of Cal State University Dominguez Hills, was the location of the Los Angeles International Aviation Meet. 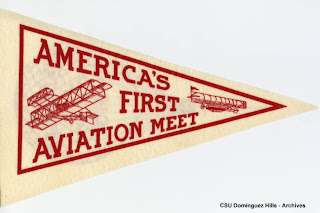 To imagine it, you must remember that air planes were brand new. The Wright Brothers' famous flight at Kitty Hawk had happened only seven years before. There were no standards, no "typical" planes.

You can read about it in Air & Space Magazine . Hopefully the LA Times will have a piece too. Or you can go to CSUDH's special features on the air show.

The picture below is from the CSUDH archive, and shows a Farman Biplane in the starting square, piloted by Louis Paulhan. The two dirigibles in the picture were designed by other aviation luminaries: Lincoln Beachey and Roy Knabenshue (Knabenshue was one of the organizers of the show). The balloon banner advertises the Los Angeles Examiner. Product placement...isn't it comforting to know that some things don't change? 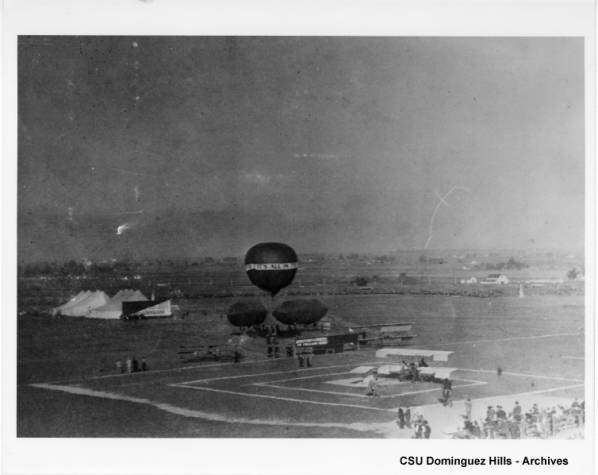 Posted by Vickey Kall at 1:23 PM No comments: 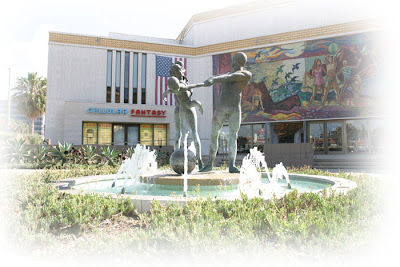 Another former Home Savings and Loan featuring the mosaic artistry of Millard Sheets. When Home Savings and Loan got taken over by Washington Mutual, WaMu did a pretty decent job of conserving the artwork that came into their hands along with the buildings. Not all the former Home S&L's becames WaMu's, of course, and this building at Wilshire and 26th is a perfect example of that. It's now a Cellular Fantasy headquarters.

This picture doesn't showcase the mosaic, however. 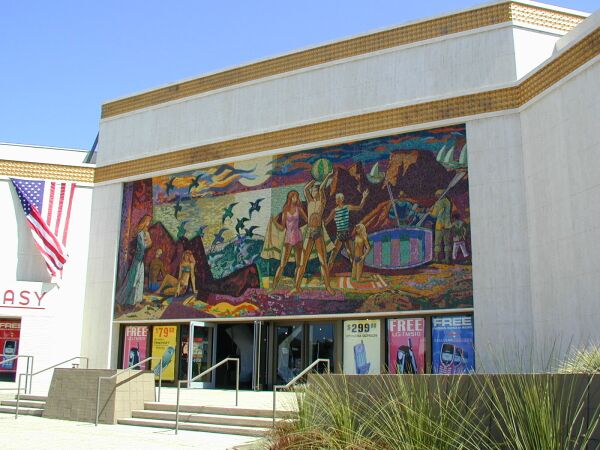 For that, I turn to a page on RPMurals, a site that may have been abandoned because the author and photographer (Rich Puchalsky) moved away from California. I hope not. I'm using one picture--but there are several others on the site, including a close-up of Sheets' signature in mosaic. He designed the work, but it was executed by Denis O'Connor and Nancy Colbath.

Skipping around the internet, I've picked up a sense of worry over whether Chase Bank will prove to be conscientious caretakers of the artwork they've inherited. Let's hope so--it is priceless. Adam Arenson has a blog set up listing sites of Sheets' work (again--is it active?), and the Avenue to the Sky blog sounds the alert--at the Pasadena Chase branch at Lake and Colorado, some idjuts actually set up to paint over an interior mural by Sheets and were stopped by a library employee who happened to notice and made a phone call!  Paint over...I cannot believe any one person, painter, teller, customer, would be stupid enough to stand by and let that happen.  Thank God for Librarians! 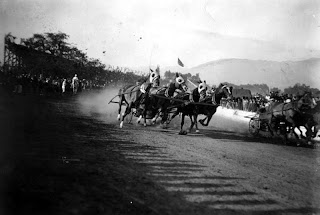 "By some it is advocated that an Eastern football team be brought out here to play in an exhibition game as the feature of the afternoon. This would cost over $1000, and unless the game was a contest, backed up by rivalrw [sic], resultant from an even match, it would be a farce. It is our hope that it may be found feasible to take the same amount of money which a football event would demand and devote it to a Roman chariot race.  The inducement of large cash prizes would be made, $500 or $600 being offered for first place, and this, I believe, would call forth the genuine article and would be a sight worth going many miles to see."

Needless to say, no one wanted to argue with a visionary like that. When President Daggett advocated chariot races back in 1903, chariot races were what he got.(One does whimsically wonder, though, what put the idea of chariot races into Mr. Daggett's honorable head.)

New Years Day Chariot Races began in 1904 at Tournament Park, part of Cal Tech. This thrrrilling picture is from the 1908 event. In 1905, motorcycle races were held as well--guess one thing leads to another. But chariot races, along with polo games, ostrich races, and other frivolities, amused spectators through 1915. Then it was foooball, always and forever.

For the record, a football game was played in 1902, between the Michigan Wolverines and Stanford, but it took fourteen years to get around to scheduling another Rose Bowl game--perhaps because the Wolverines trounced, I say trounced, the California team, 49-0. It was so bad that the Stanford team captain asked that the game be ended with eight minutes left on the clock.

That never happens in chariot racing, a much more civilized sport.

Posted by Vickey Kall at 4:15 PM No comments: