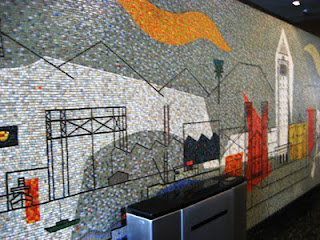 In 2004, Los Angeles Magazine called this piece "a 6 by 36 foot postcard of undulating ocean waves, swirling on-ramps, and city landmarks from Griffith Observatory to Angel's Flight." At that time, the mosaic was on the edge of its 50th birthday, having been installed at Parker Center in 1955 by Joseph Young.

That year, tours of the new Parker Center were in such high demand that a policewoman worked full time leading groups through the building. 8000 folks from September through December, 1955.

Yound died in August 2007 if you want to look up his obituary on the Los Angeles Times. I blogged then, but the link is no longer good. Here's a copy from the Pittsburgh Post-Gazette, which is where Young was born.

The above picture of the mosaic came from the Joseph Young fan page on Facebook, and there are more photos there.  And here's an interesting b&w image on radaris.com--no idea where they got it. 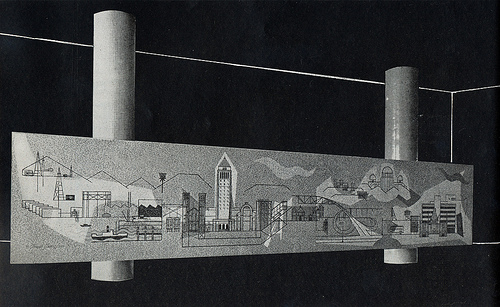 I am actually on hold with the LAPD as I write this, trying to learn if the mosaic has been moved to the new police headquarters. Their hold music includes Beethovan's Fifth Symphony...quite nice.

Nope--the mosaic is still at the old Parker Center, and there are no plans to move it. 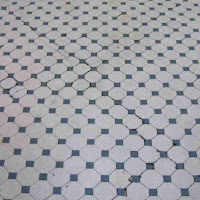 Is it stretching a bit too far to call this a mosaic? It's a tesselation, but a mosaic? I'm going with it because I've been holding on to these pictures for over a week and want to use them.

The floor appears in several films, most notably Mr. and Mrs. Smith. At the beginning of the movie, this floor and lobby stands in for a hotel in Columbia where John Smith (Brad Pitt) meets Jane (Angelina Jolie).

As Jane looks at John and the camera focuses on the weapon hidden under her dress (like a weapon would be unnoticable under the sheer fabric, which silhouettes her entire figure...but I digress), we clearly see this floor. 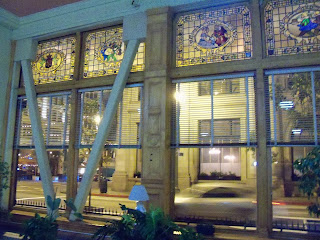 Here's another view of the lobby, looking out. Stained glass windows are mosaics, technically, right? Pieces of tile or glass fitted together to form an image? The stained glass--the windows, in fact--do not appear in Mr. and Mrs. Smith. But if you imagine a big wooden bar along the left wall, that's where Brad Pitt stood. Put a lot of small tables and plants in the space, and you have an old South American hotel.

The girders on that left window may be a "V", because the place was originally called the Van Nuys Hotel when it was built in 1892. 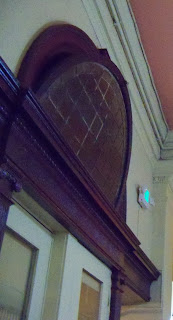 This link leads to a picture of the entire hotel on You-Are-Here. The stained glass window and main entrance are on the bottom left, facing 4th Street. Today it is the Barclay, and it stands at 4th and Main. Also in that linked pictue, notice that the corner windows seem vacant. That corner space is often set up to look like a coffee shop, especially in CSI shows.

This picture is of a doorway and transom window that leads off the lobby, to the left as you walk in. It was highly ornamented and colorful in the movie, but recognizable.

The last shot shows the great enclosed front desk, visible in the movie too. (The bar would be to the far right). There's actually an old-fashioned switchboard inside--a modern system sits right in front of it, but the switchboard is still there.

The pillars, the floor, the iron bars--the Barclay was where Mr. and Mrs. Smith met. 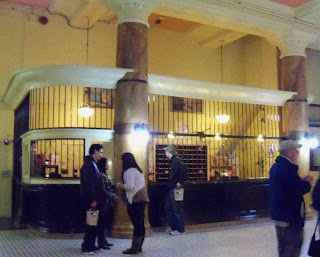 I can't claim to have come up with this on my own--but I did verify it by watching the movie opening a couple of times.

No, the info came from Harry Medved who knows all there is to know (just about) of movie locations. He led a tour of the downtown area while promoting his new book Location Filming in Los Angeles (Images of America Series)

As for the Van Nuys/Barclay Hotel, Here is an old postcard showing it in its Van Nuys days--the stained glass windows once lined both sides of the place, but now only two are left. I found this at a USC site. 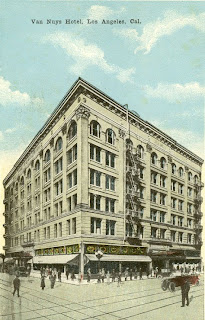 Posted by Vickey Kall at 3:54 PM No comments: 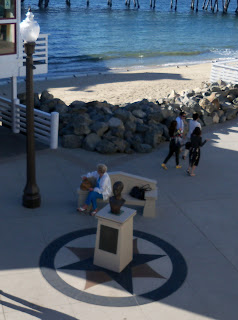 Here's a shot from Redondo Beach about ten days ago, showing the new bust of Surfer George Freeth, who died in 1919.

New, because the old copper bust was stolen and never recovered. By a lucky chance, the RB Historical Society had the molds from the original statue.

Luckier still, although the artist had passed on, his daughter, also an artist, was glad to recast and recreate the art. (Here's a Patch piece on the re-dedication of the statue, mentioning KellyO, daughter of Terry O'Donnell.)

The old statue stood further north--where the small family is headed. The pier parking lot is on their right, so the statue was far less visible and easily taken. The new location is Freeth Plaza. That's the Starboard Attitude upstairs to the left.

And here are two photos for a side by side comparison--one of the new bust, one of the old (old meaning 1977, when it was originally cast. That's old if you'r twenty, I guess...)

The right picture is from darin.rtgit.com, courtesy of the Witts. But it really is the best picture showing the facial features. (If the owner asks, I will take the photo down.) 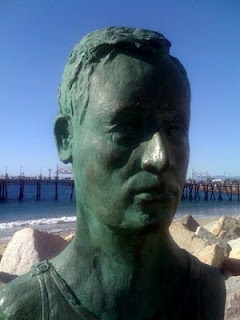 Email ThisBlogThis!Share to TwitterShare to FacebookShare to Pinterest
Labels: art

Hate to say it, but I remember when Borders built its big store in Torrance and we all thought, how can a book store possibly sell enough to pay for that chunk o' real estate? 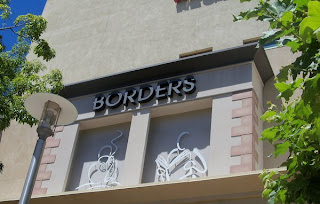 But then we began meeting for coffee and listening to acoustic concerts, getting books signed by the author, joining in group discussions, and in general abandoning the old, dusty stores where we'd prowled for used books for years. Borders seduced us with flirtations and lattes and songs . . .

Amazon pushed them out of business, but I can't help wondering--will this possibly bring back a few old dusty bookstores?

So many are gone--Either/Or in Hermosa, Acres of Books in Long Beach. Others remain, slightly changed: Book Soup and Vromans come to mind. 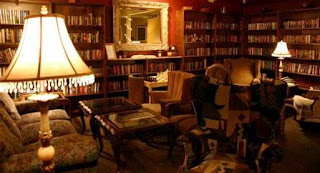 Many little coffee shops (Catalina Coffee in Redondo Beach is a perfect example--the owner posted this picture at right) have added shelves of used books over the years. Along with comfy, cushioned chairs and sofas, the books contribute to the feel of lounging a big living room. Friends and couples gather there. Kids meeet for study groups.

Maybe we can survive losing the neighborhood Borders.

I expected to find Montclair and Rolling Hills on there and maybe Long Beach (both Bellflower Blvd and Pine)--but Glendale, the Santa Monica Blvd. store in LA, Cerritos, Pasadena?

My old favorite, Torrance, remains. But with the company in bankruptcy, and some publishers not shipping to them due to unpaid bills--for how long? 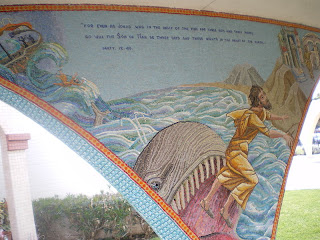 Today's mosaic comes from North Hollywood. I think...maybe it's Studio city. Anyway,
St. Anne Melkite Greek Catholic Church on Moorpark St. inaugurated its current church and hall in 1965. These archways--with many mosaics, all depicting scenes from the Bible--stand outside the church, surrounding it almost like a moat.

I hear there's a three year waiting list to have a marriage ceremony there, and I suspect it's not just because the church is beautiful.

I have yet to see or hear a coherent explanation of the differences between these particular churches. Anyone who does understand usually cares passionately about canonical law and tradition and all the things that complicate the explanation. The levels of relationships between the Greek and Roman, Melkite, Coptic, Syriac, etc, etc, are-- if you'll pardon the pun--positively Byzantine.

But the mosaics are purty.

Valentino's Suite at the Alexandria Hotel 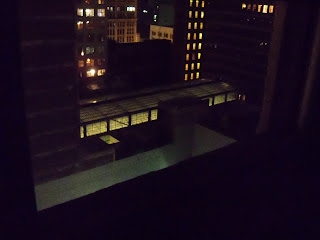 There is a suite of rooms on the 12th floor of the Alexandria Hotel that is supposed to be haunted by Rudolf Valentino. The story is that before he became a famous movie star, he lived at the Alexandria on Fifth and Spring. He was a dance instructor at the time.

No proof, of course--no lease agreement or signature on a register. I hate to poo-poo a good story, but the suite of rooms is rather spacious and the Alexandria a first class hotel back then.

Could a dance instructor have lived there? 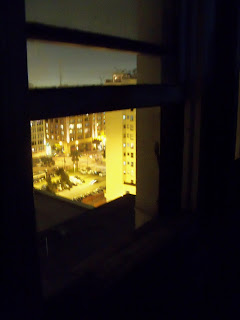 I got to see the suite during the tour led by Harry Medved last Saturday, when the Metropolis Bookstore hosted a book-signing event for Location Filming in Los Angeles (Images of America Series)

The reason these pictures show no more than the view out of windows in two different rooms in the suite is that there were no working lights in the room, and my camera's flash wouldn't function. That has never happened before.

Oohhh, maybe there is a ghost!

BTW, filming for the new Spiderman movie was going on just a couple of blocks away, at Spring and 3rd. Apparently all the Spiderman films have used old downtown Los Angeles to stand in for New York, at least in some parts of the movies. 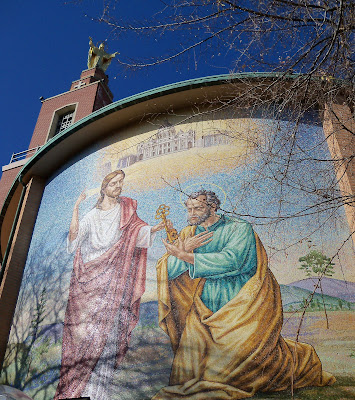 I blogged about Mary Star of the Sea's mosaic months ago, but never realized that around the other side of the church, facing 8th Street, there were more artworks.

I like this picture best, because the bronze statue of Mary raising her arms toward the Port of Los Angeles towers over it all. There's a bit of a glare from the afternoon sun and some shadows cast by trees, but all in all it's my favorite shot.

This a is very Catholic image: Jesus handing the keys to his kingdom on earth to St. Peter, who will be the first pope.

Just below the mosaic is a statue exhorting us to pray for peace (ironically, enclosed in plexiglass to protect it from vandals), and a memorial to Preseident Kennedy.

Mary Star of the Sea was established in 1889, making it one of the oldest parishes in the Los Angeles area. 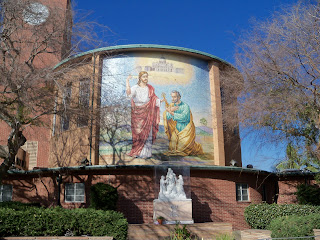 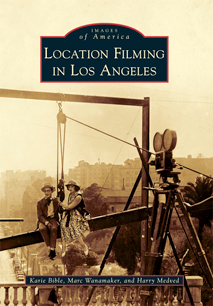