Too Hot To Do Anything But Read--

So here are some reading suggestions: 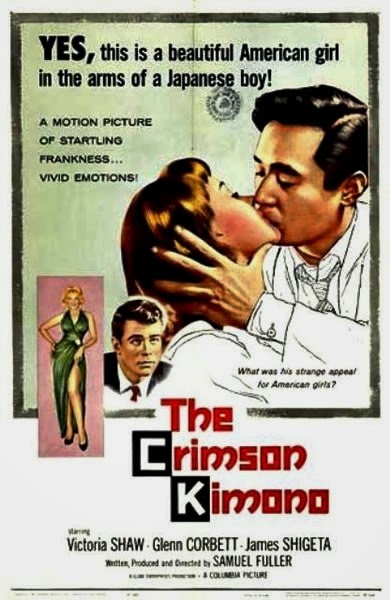 Posted by Vickey Kall at 4:58 PM No comments:

Email ThisBlogThis!Share to TwitterShare to FacebookShare to Pinterest
Labels: articles

Yikes! It's still Monday, barely--so here is a picture. 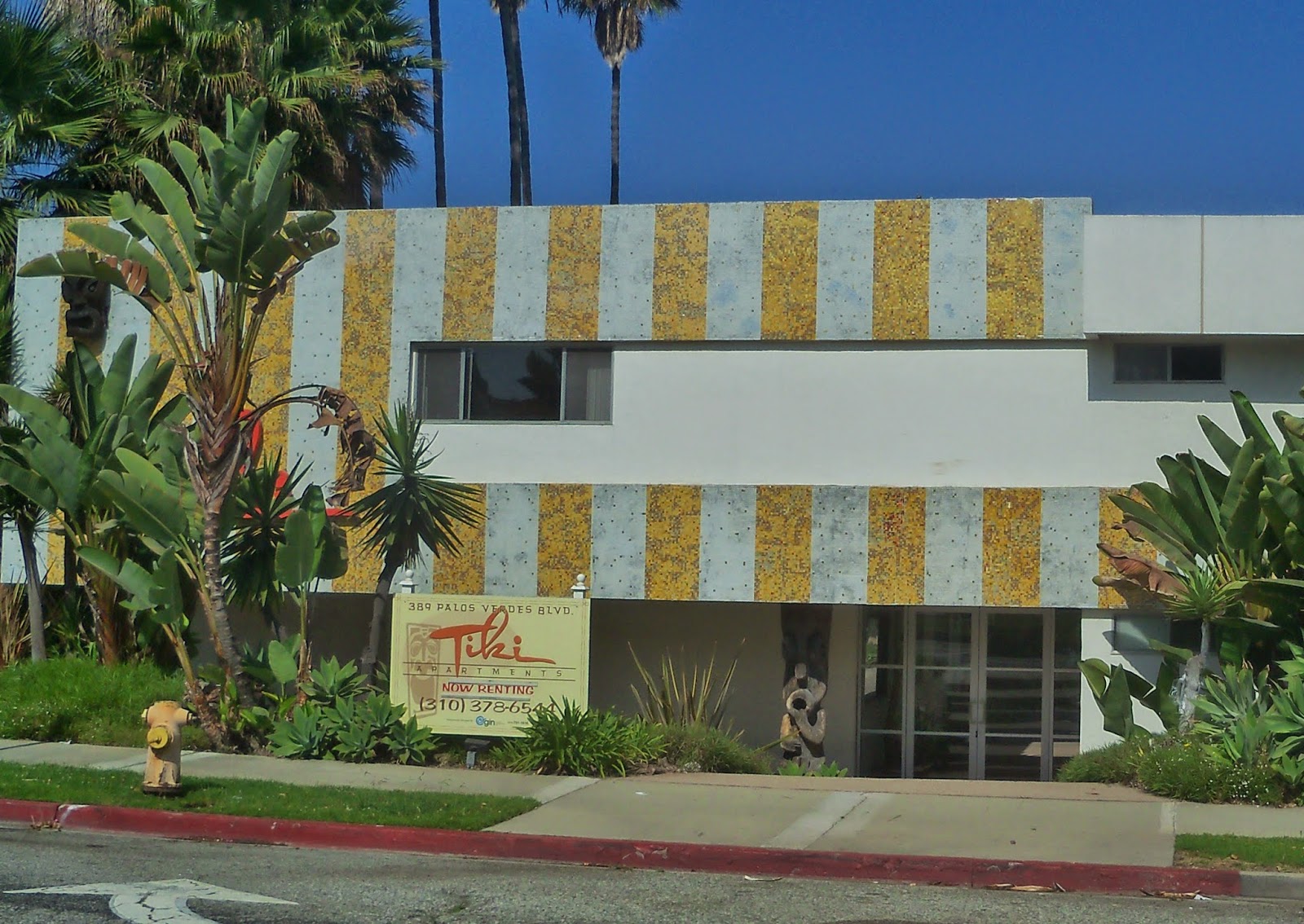 The mosaic facade is probably from the 1960s--I'm guessing--I suppose I could just say "Mid-Century." You can see the address, 389 Palos Verdes Blvd. It's in south Redondo Beach, just north of Calle Miramar. There's a tiki right in front, and I understand there are more in the courtyard inside.

Just one of those classic buildings you pass but often don't notice. 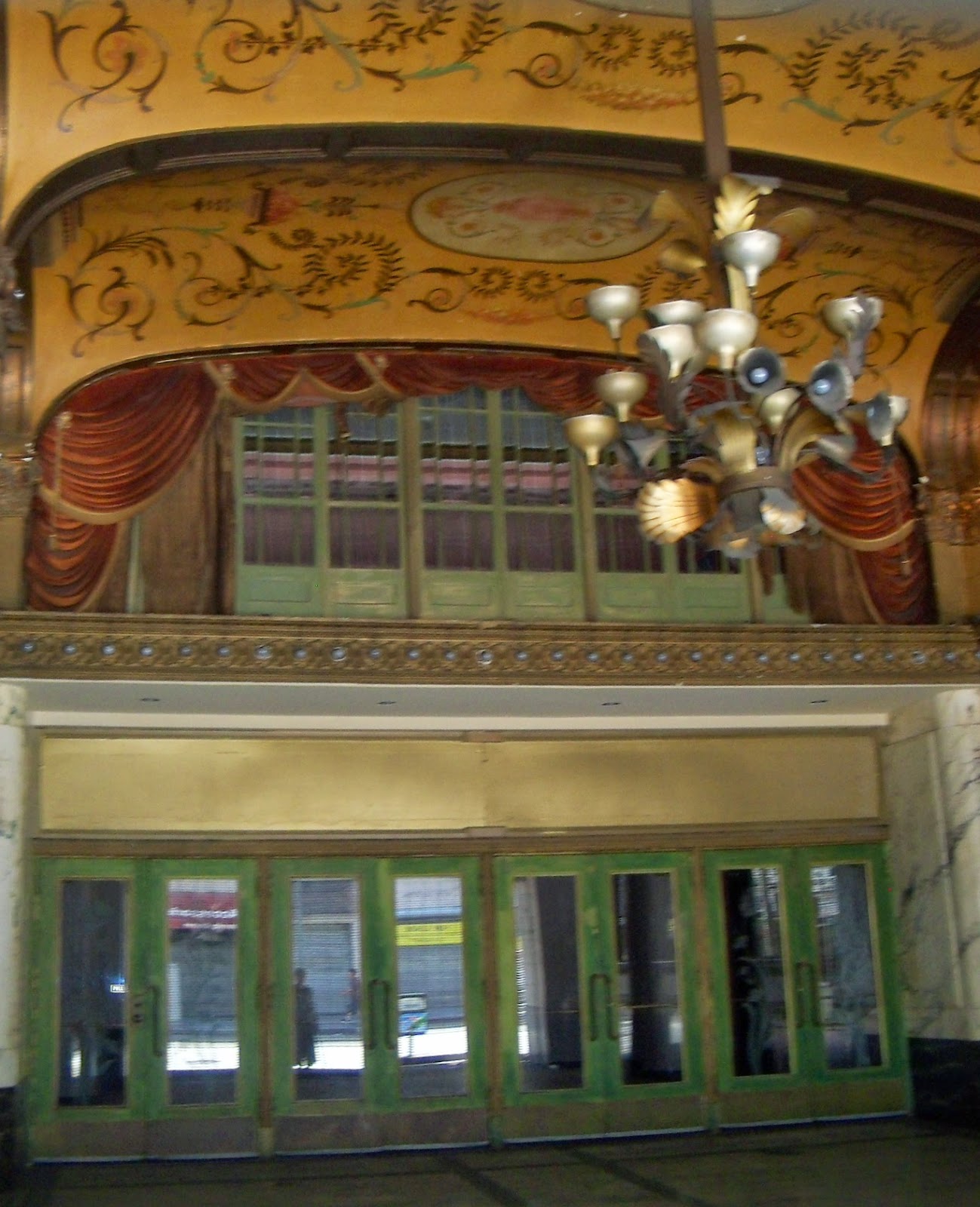 Lately, a few particular posts--for no reason that I can see--are getting the same spam multiple times each day.

For that reason, I've enabled Word Verification. Now, when someone posts a comment, they'll be asked to type in a random set of letters.

Meanwhile, here is a picture of the exterior of the Palace Theater on Broadway, shot on a sunny day last spring. I haven't had any excuse to post it before now and I hate to see it go to waste.

I could really get lost in Twitter. Now that I've figured out how to use groups to filter the  tweets from people I feel duty-bound to follow (mostly because they followed me) from folks I'm really really interested in (like Chris Nichols of LA Mag and Archaeology and Nat Geo and the Onion), I'm finding tons of interesting stuff.

Such as links to Chris Nichols' story about a 1938 Streamline Moderne building that was designed by the same team that built the Pan Pacific Auditorium. This structure, on Santa Monica Blvd., started out as a veterinary hospital and is now threatened with demolition. 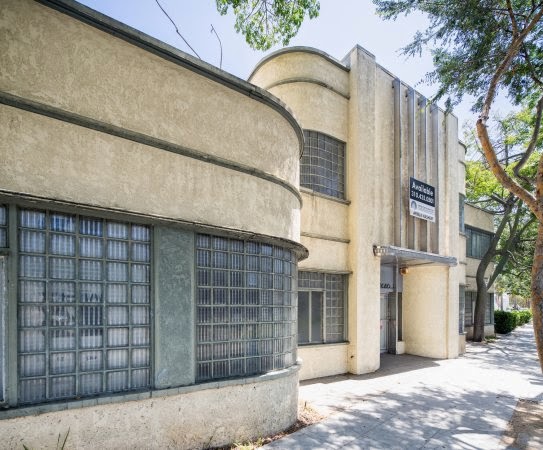 The LA Conservancy has highlighted this building for a few weeks now, and the next step in deciding its fate will take place on August 18, at a City Council Meeting. Why is it threatened, when it's such an obviously neat old building? The Melrose Triangle Project will sit right on top of it. And what is being decided on August 18 is the certification of the Melrose Triangle Project.

"Sit right on top of it" is an exaggeration, of course. The original plan did call for its demolition, but once all parties became aware of the historic building, an alternative was proposed that will work around and preserve the old Dog and Cat Hospital.

The City Council could, technically, approve either plan. They could also delay or ask for more studies or whatever.

If you want to learn more about this curvy glass-bricked building, Los Angeles Magazine & Mr. Nichols have put up a story with:

A Facebook page has more pictures and updates as well, and promises more photos from the Getty Research Archives. And LAWeekly has more in a story focused on two women who are heading up the drive to save the building.

Posted by Vickey Kall at 7:24 PM No comments:

Two Events: One Serious, One Silly

The city of Torrance is planning a big memorial to celebrate Louis Zamperini's life, on July 31 at Torance High School's Zamperini Stadium. The stadium is off Arlington at 2125 Lincoln, so Mapquest the site (it is not attached to the school). 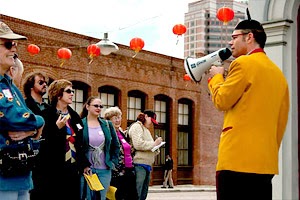 Much more information is in this Daily Breeze article, which also answers a burning question (well, it's been burning on the "You Know You're From Torrance If..." Facebook page): In the new Unbroken  move, where were the scenes of Louis Zamperini's childhood shot? Turns out, Australia.

The second event I'd like to mention is a big 6-hour school-bus-and-walking-tour of Los Angeles by Charles Phoenix, coming up on August 24. It begins and ends at Union Station and is billed as a Disneyland Tour because Phoenix sees Downtown LA as a giant theme park.

I think he's right, especially when you factor in all the waiting you have to do to get around there . . .

That first link was to the Facebook Event Page, but here is one to CharlesPhoenix.com that describes the entire tour. Chinatown, Olvera Street, lunch at Phillipe's--sounds like a great afternoon! 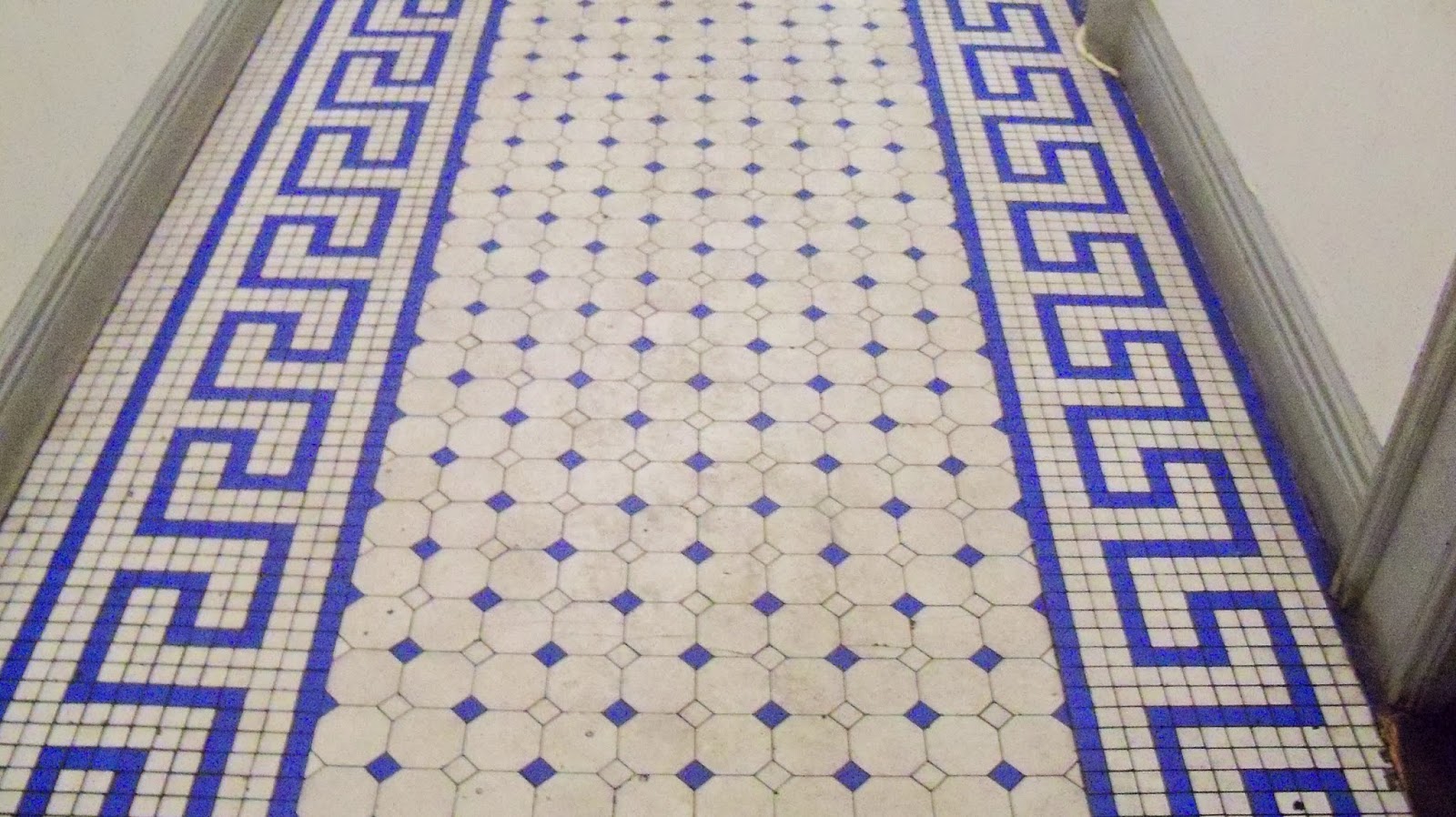 If you've ever been to Seattle, you've probably taken the Seattle Underground Tour (Yelp site), more properly known as Bill Spiedel's World Famous Underground Tour. The tour is centered in Pioneer Square and guides you up and down locked staircases, into the nearly-original streets of the city, which are one floor down.

Never been? Well, it's more than fascinating--it's funny. Lots of humor revolving around toilets that turned into geysers at high tide, plus a few set pieces from an old TV show ("Kolchak, the Night Stalker") which filmed an episode in the underground, and an explanation of why the glass in the cement-and-glass slabs has turned purple.

There are no mosaics underground, but this one is from the back hallway leading to the bathrooms of Doc Maynard's, the latest incarnation of the restaurant that surrounds the Underground Tour ticket booth.

Also in the Pioneer Square area, I saw this tabletop mosaic.

'Fraid I don't know anything about it. 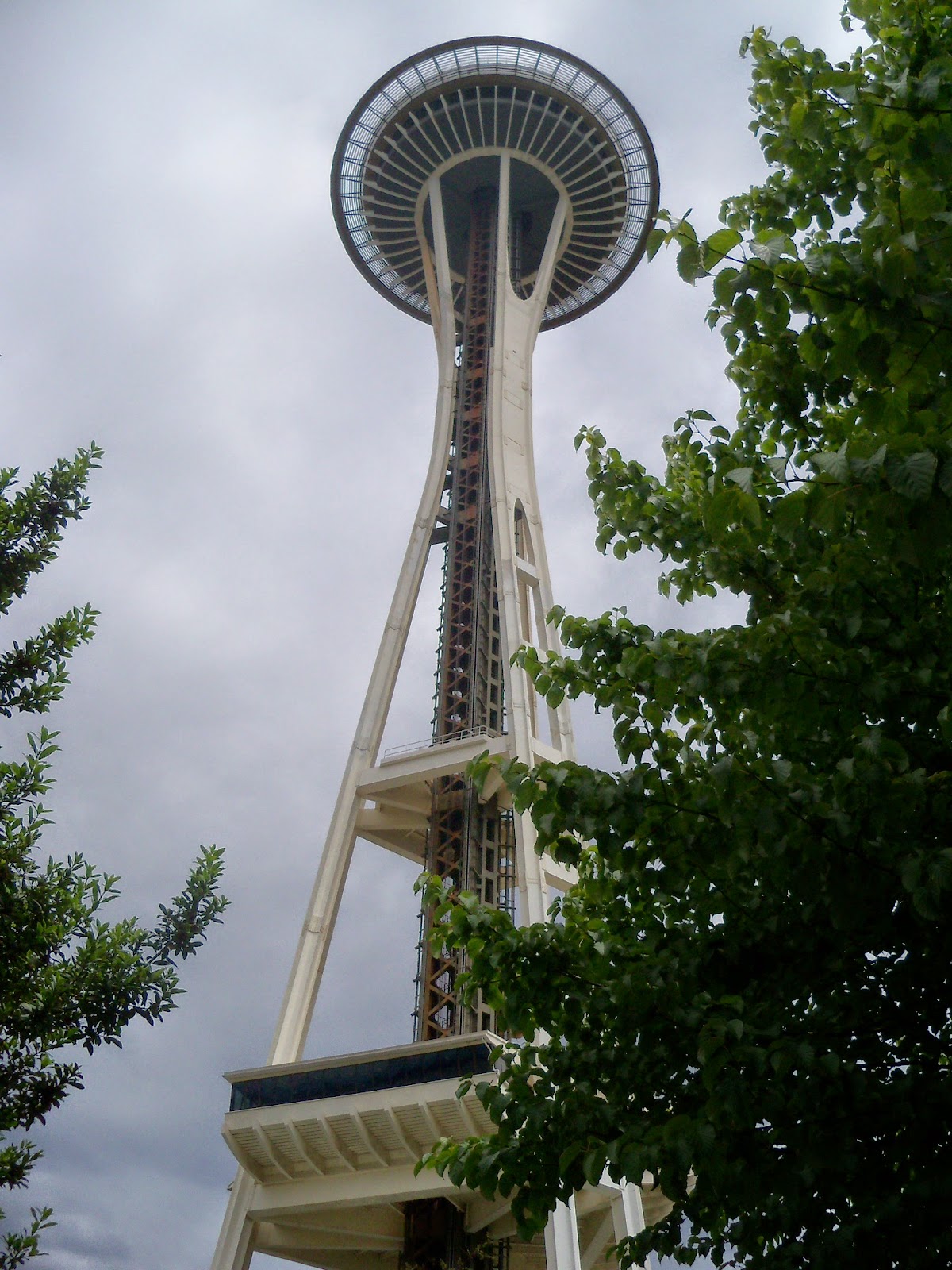 Finally, who can go to Seattle without taking a picture of the Space Needle?

It's not possible. But below right is the picture that really caught my eye: the Space Needle fronted by (as the caption reads):

THE LARGEST WORK  OF ART IN THE
PACIFIC NORTHWEST, PAUL HORIUCHI'S
MASSIVE CERAMIC MURAL
MEASURES 60'  BY 17'

Horiuchi lived in Seattle, and created this mural--which is really a mosaic--for the World's Fair. 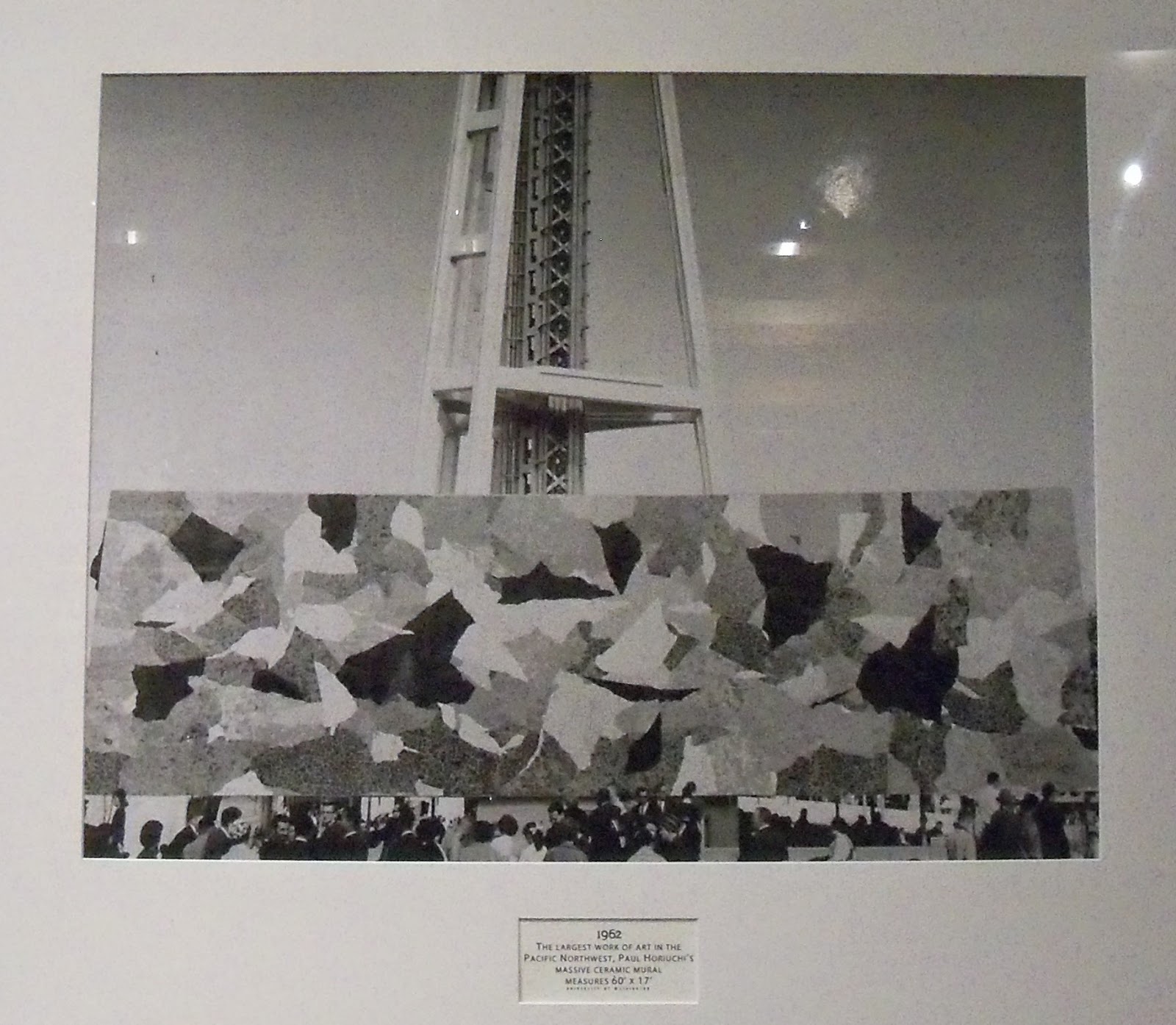 Horiuchi started out with sheets of torn, brightly colored paper and enlarged them--the intent was to evoke the rich colors of the Northwest. Fabricated in Italy, the finished mosaic is made of 54 colored panels of Venetian glass, with 160 color variations.

The Seattle Mural is now the backdrop of the stage of the Seattle Center Mural Amphitheater. It was restored in 2011, just in time for the 50th anniversary of that fair and Seattle Center.

There are tons of pictures of the Seattle Mural on the Internet, some with performers in front of it, some in the fog, some with enhanced colors--but I like the one below, from Art Beat, the best.

Seattle has so many more mosaics! We passed parks, schools, and businesses ornamented with mosaic art, but they went by so fast I didn't get pictures. Public art is a big part of Seattle's vibe, just like music is. That's one reason why it's so much fun to visit. 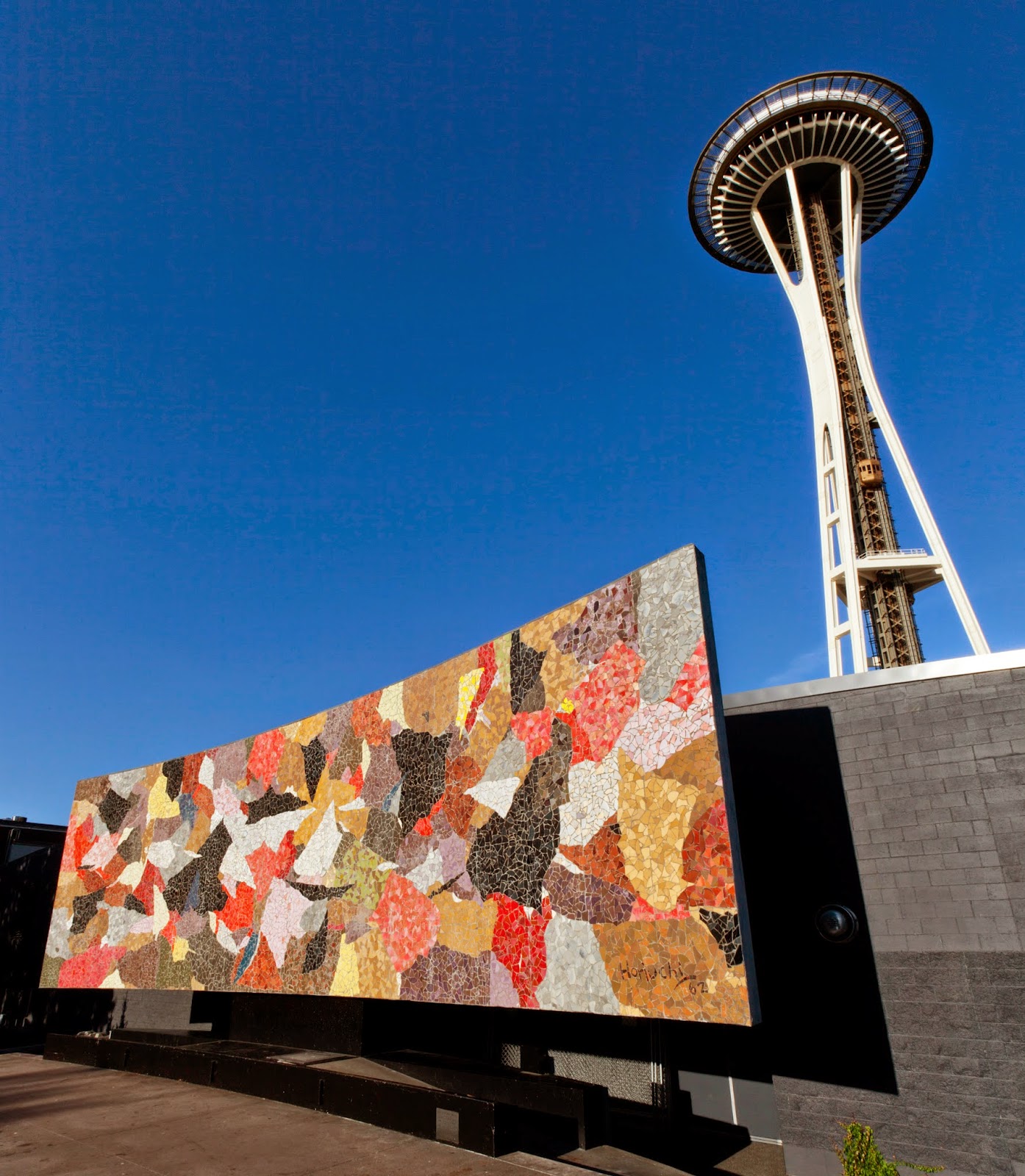 Posted by Vickey Kall at 2:17 PM No comments: 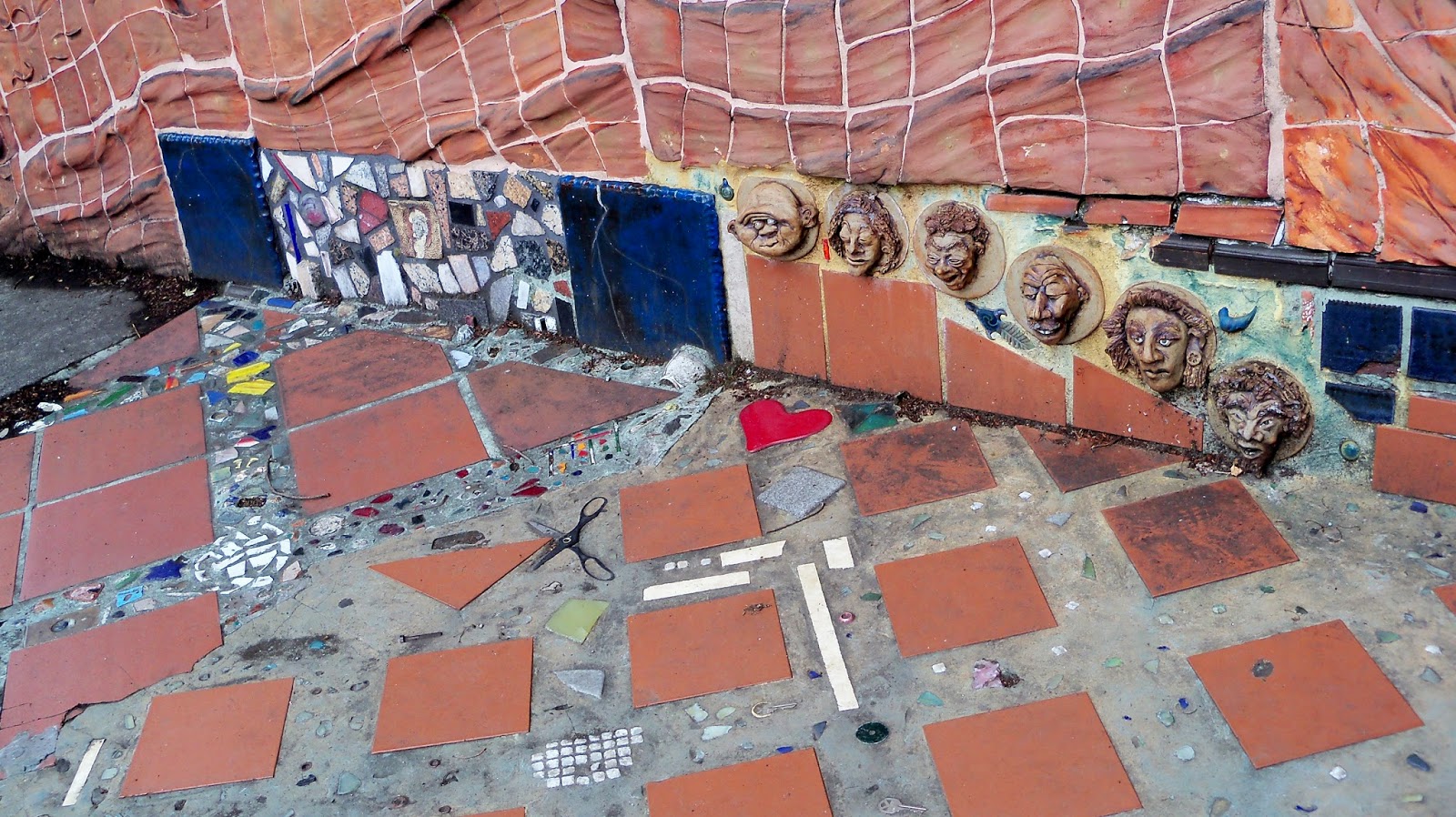 Two weeks away in the great Northwest, and what do I have to show for it? Besides a big grin and about five extra pounds, courtesy of tastings and flights? Pictures of mosaics!

In fact, the Fremont area of Seattle, which I'm assured is trendy and bohemian, is awash in mosaics. Well, it rains even in July there, so it's awash in just about everything.

I found Pique Assiette mosaics there, if you can believe that. The proof is in this picture.

No idea what artists were involved or if it was a community effort (I suspect yes) but the ground of this patio or plaza is covered in widely spaced tiles, with the grout being filled with things like bottle caps, screwdrivers, keys--lots of keys--and broken toys. And this pair of scissors. The little square or plaza where these mosaics reside is most notable for an 8-ton bronze statue of Vladimir Lenin, which was cast in Soviet Czechoslovakia just a year before the communist government fell. Must have been aggravating for the artist, Emil Venkov, because he had worked on it for ten years. He portrayed Lenin against a background of flames and violence, most unusual, but the statue was thrown down.

How did it end up in Seattle? An American teacher in Poland, Lewis Carpenter, came across it in a scrap metal yard. With the help of a few others, he managed to buy the statue and have it shipped to Washington, but he had to mortgage his home to do so. He felt it should be preserved as a work of art.

Mr. Anderson died in a car crash before the statue was installed, and his family is willing to sell--but for upwards of a quarter million dollars.

The pique assiette mosaics are in the low walls and ground behind Lenin.

Have not found any mention of Lenin's red hands, and in fact they don't look red in other pictures of the statue, so I assume their color is due to local vandals or vandalizing activists, rather than the artist Venkov. 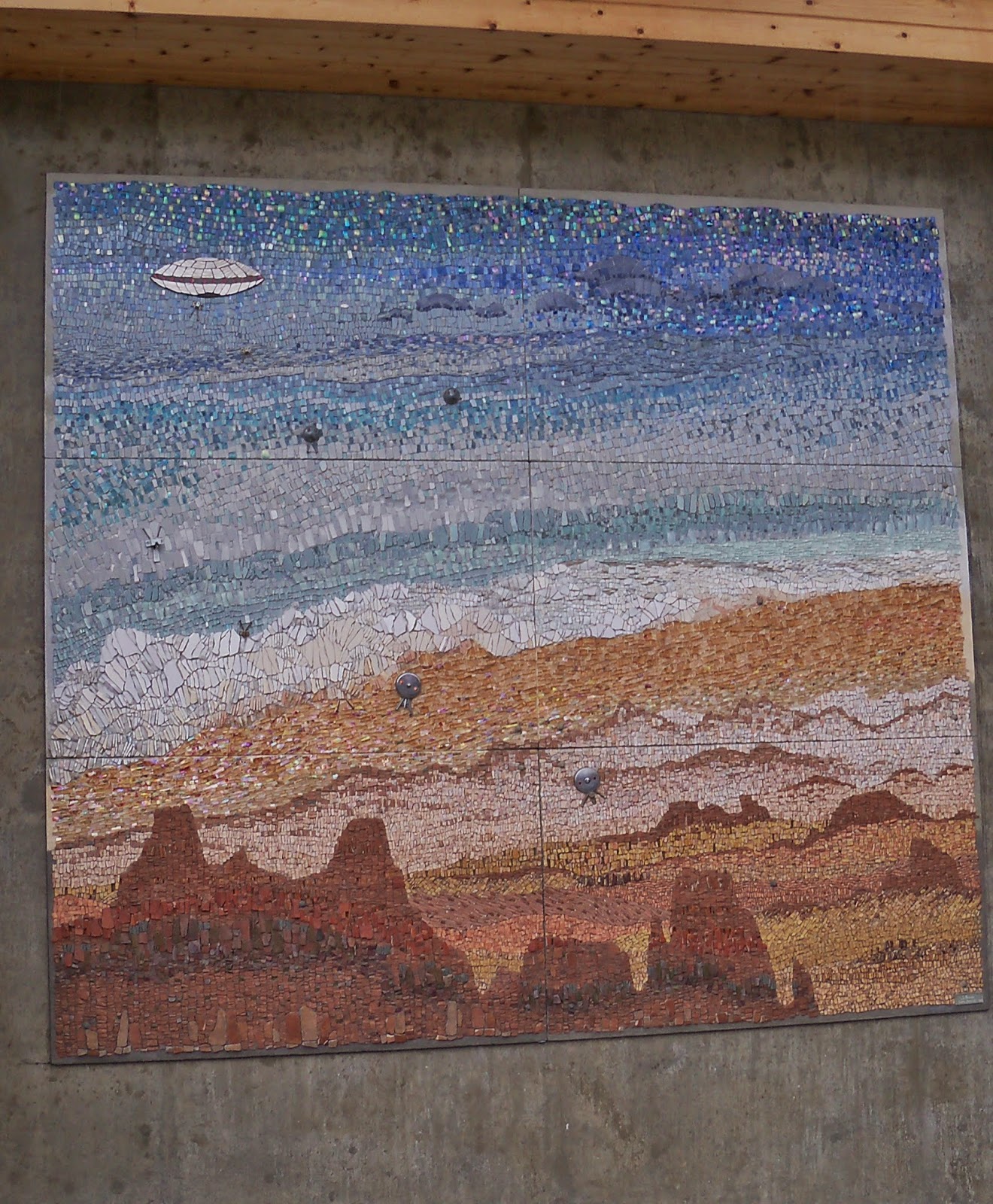 Just a couple of blocks away from Lenin and the pique assiette mosaics is this work of art by Jo Braun and Kate Jessup, installed last year. It was pouring rain when I took this photo, but it came out well.

The piece is called "Invasion of the FoundFacians." You can scroll through pictures of the artwork's elements and the planning stages on Jo Braun's website. Close up, you can see that some of the landscape is iridescent.

There was more public art and sculpture in the area, and I missed most of it because, being an Angeleno, I wimp out in rain. But I do have more pictures from both Seattle and Half Moon Bay in California, which I'll share over the next few Mosaic Mondays.

Posted by Vickey Kall at 9:20 PM No comments: