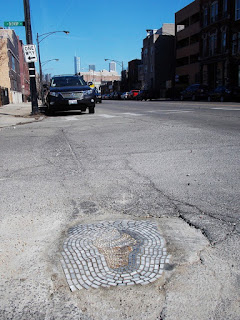 This Monday is Memorial Day, so I refer you to my post about the World War 2 Monument in Green Hills Memorial Park, which is surrounded by mosaics.

Meanwhile, I will blog today about an artist in Chicago who is filling the city's potholes with art. His name is Jim Bachor, and I read about him at Zócalo.

Bachor fell in love with mosaics and traveled to places in Europe like Pompeii to view them. He considers mosaics to be indestructible, which is probably why he's not irate that the city of Chicago has covered up a couple of his mosaics on their streets with more traditional street repairs. Only a couple.

Since he started in 2013, creating the street art has become a game. Bachor spies an appropriate hole, designs a mosaic to fill it, and shows up with wet cement (I imagine at night). He does the deed, posts pictures on Instagram, and his followers are thrilled.

In fact, they've created a Kickstarter page for him, since - as you might guess - filling in potholes in Chicago without jumping through the proper administrative hoops does not pay much. Curbed Chicago reported earlier this year that over $5,000 had been raised through Kickstarter. 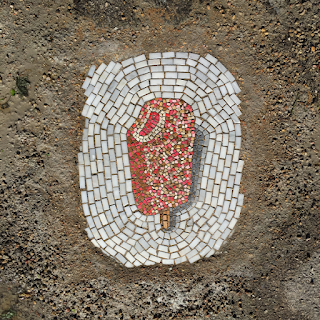 Would love to see this attempted over our roads. There's certainly plenty of fertile and pocked ground for it, not just in Los Angeles but in nearly every city in the county.

As you can see (and go to Bachor's own Pothole Installation Page if you need more proof), the man is partial to frozen treats, but flowers and whimsy are also present.

In fact, on his portfolio page I spotted mosaics of Rod Blagojevich, and several of the drawings that we used to see on the back page of comic books, with the caption "Are you an artist?" You'd draw the cartoon and send it to this art school for evaluation, then sign up for their long-distance classes (way before the internet). Also portrayed: Mayor Daley, packaged meat, Twinkies and Hohos, Starbucks and McDonald's, 3-D Caesar, and much more. All for sale!

Bachor is busy and probably won't be shipping any 20 pound mosaics to Los Angeles for midnight installation (not to mention the requisite wet cement). But other artists may be inspired by his accomplishments. Maybe? 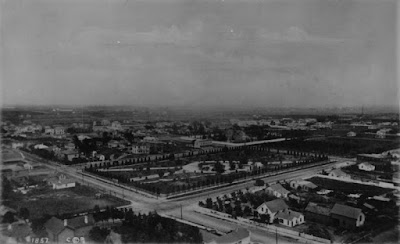 Pershing Square: a place in the news, because the contract for the redesign has been awarded.

Of course, back then it was called either 6th Street Park or Central Park. Leonard Pitt, in Los Angeles A to Z, says it's also been called La Plaza Abaja (the lower plaza), City Park, and St. Vincent's Park.
On Armistice Day, 1918 (which we now call Veteran's Day, Nov. 11th) the park was named for General John J. "Blackjack" Pershing, who'd served as commander of America's Expeditionary Forces during the Great War.

Below is an undated photo  taken from Bunker Hill. All these photos come from the Los Angeles Library's photo collection. PublicArtinLA dates this picture at around 1880. 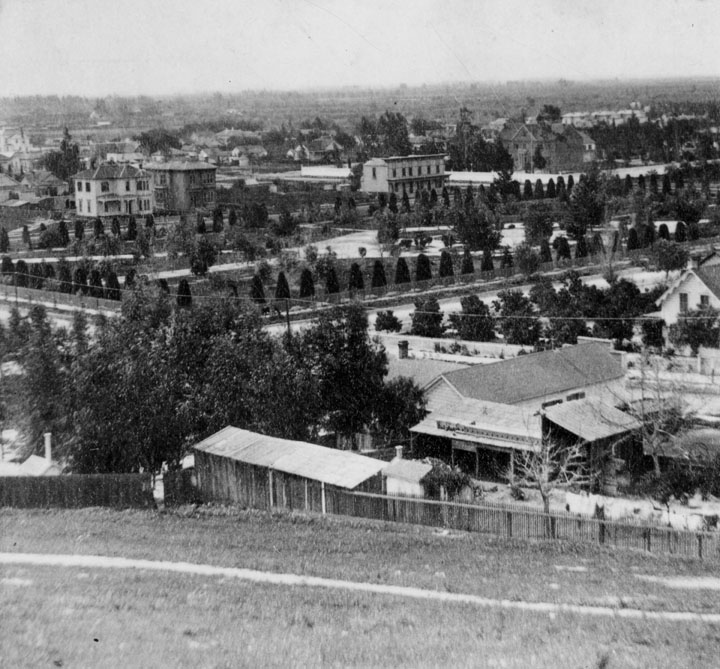 And here is what the library says:

Former Mayor Cristobal Aguilar signed Pershing Square into being in 1866. . . . The park was first renovated in 1911; in the 1950s a car garage was built beneath it; and in 1994, it was completely redesigned by architect Ricardo Legoretta and landscapist Laurie Olin and was rededicated on February 3, 1994. Pershing Square takes up the entire block and is bounded by 5th Street to the north, 6th Street to the south, Hill Street to the east, and Olive Street to the west. 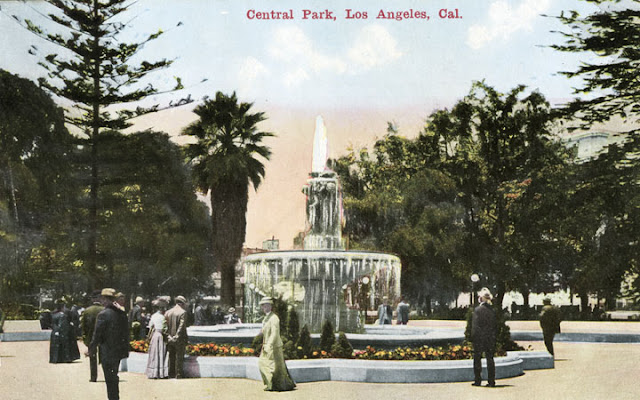 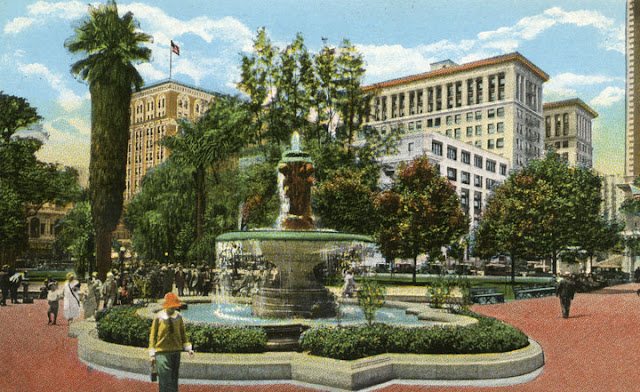 And a photo of the phountain taken during the construction of the Biltmore Hotel in 1922! 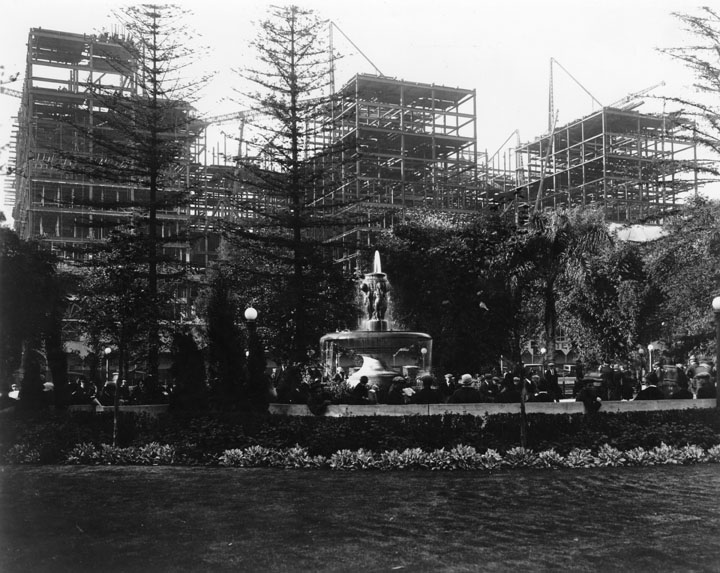 Based on the cars, this one is probably from the late 1930s: 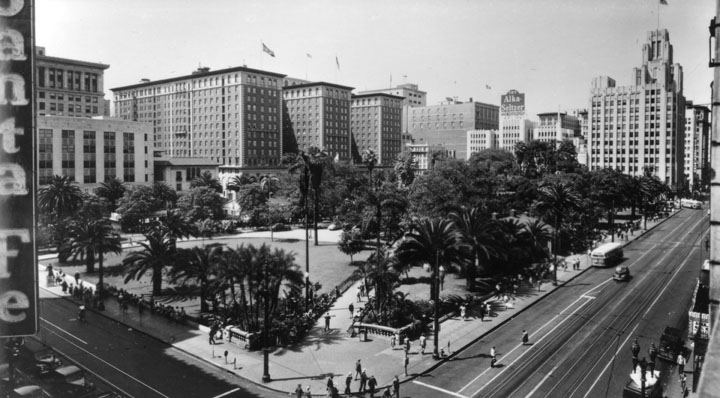 One other photo of the park in its heyday, taken by Herman J. Schultheis.  I've mentioned him before and displayed his photos in articles about eucalyptus trees and the Ace Theatre. Interesting fellow and a wonderful photographer. 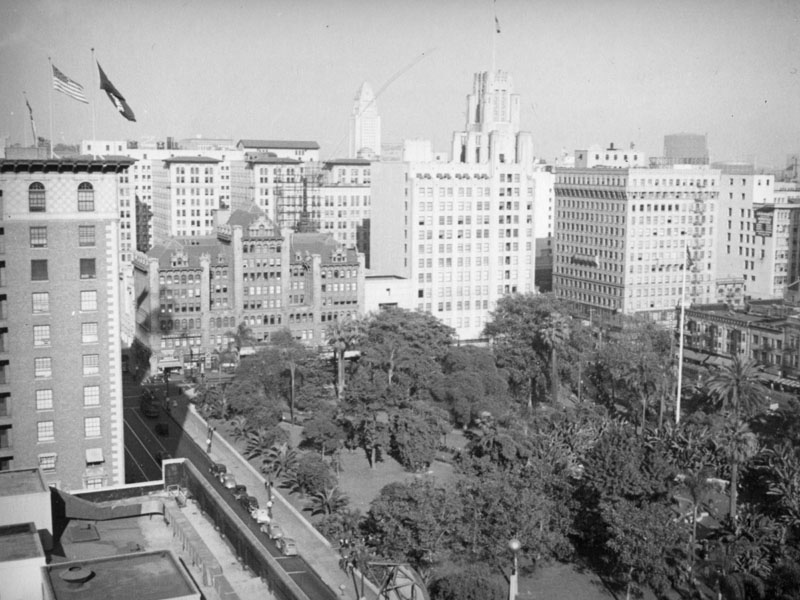 Dr. Pitt used to take his students from UCLA on a tour of the downtown area landmarks, from Olvera Street to Bunker Hill and more, and he recalled for them when he first came to Los Angeles, after World War II (I don't recall how long after--may have been the 1950s). Pershing Square used to attract all sorts of soapbox orators, who would stand on crates to expound their gripes or political views.

This photo, undated, looks 50s-ish to me. 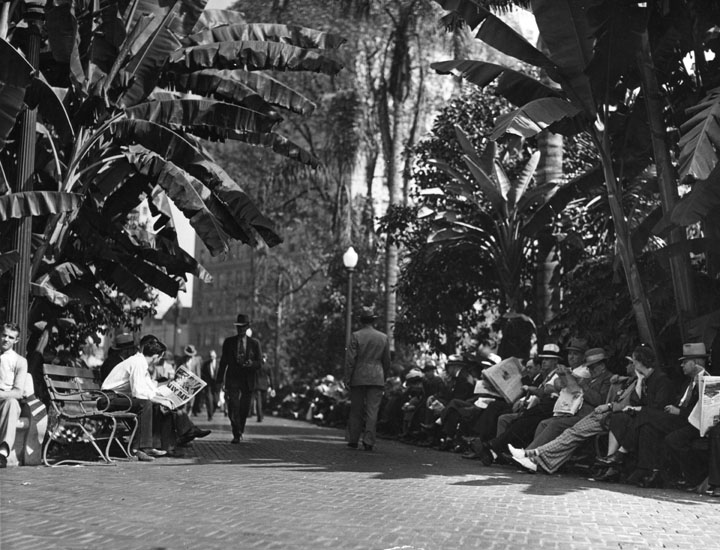 And then, in 1952, the whole thing was ripped out and a parking garage set underneath it. Here's a photo of that: 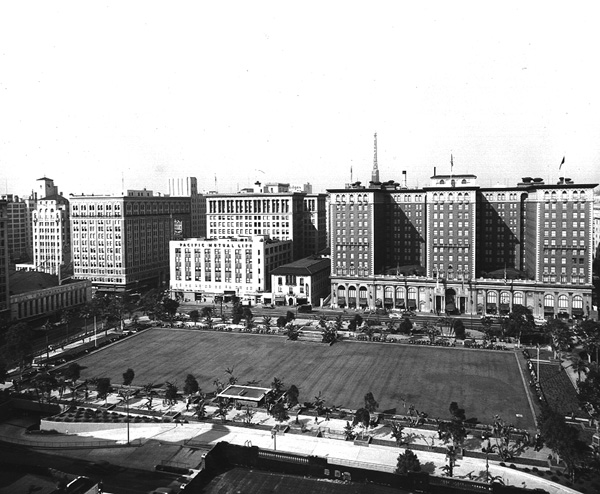 Pershing Square went through more updates, in 1964 and 1984 (in preparation for the Olympics), and drastically in 1993. I will stop here, though, because my poor blog will probably hiccup and choke if I try to cram more pictures into one post. Nobody liked those remodels, anyway, as far as I can tell. Every article I read rails about how awful they were!

Posted by Vickey Kall at 3:47 PM No comments: