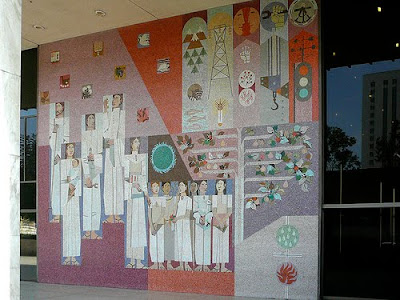 Once upon a time (from the 1920s to 1988, to be exact) a company named Ravenna Mosaics in St. Louis, MO, executed the work of artists all over the United States. In the 1960s Ravenna Mosaics employed an artist named Richard Haines, who created the "Celebration of our Homeland" and "Recognition of All Foreign Lands" mosaic panels that ornament the eterior of the Federal Building at 300 N. Los Angeles Street.

This picture is of the "Celebration of our Homeland" portion, but you can see more pictures of both mosaics at the PublicArt in LA website.

The mosaics stand over 26 feet tall, and here's what Public Art in LA says about the symbolism in this panel (attributing Michael Several for the info):

While the building's architect designated the space, Haines chose the theme, wanting to reflect the building's purpose. I dunno--such a literal, point-by-point interpretation takes all the fun out of looking at the art. I'd rather just ooh and ahh over the pretty leaves and costumes.

Anyway--and this is way more interesting--Haines drew the full size pictures as cartoons on wrapping paper (lots of wrapping paper--they were 26 feet tall after all!) and sent them off to Ravenna Mosaics to be fabricated. Ravenna traced them in reverse and matched the colors on the cartoons, gluing the pieces on with barley paste. The reverse-traced sheets of paper were not removed until the actual installation of the mosaic months later.

Ravenna Mosaic Company began as a partnership between a St. Louis glass studio and a German mosaic company to help construct the St. Louis Cathedral Basilica, and I guess it just kept going until 1991, when  the owner died.

Richard Haines, the artist, passed away in 1984 after a long career. He studied in Europe then worked for the WPA, painting murals in post offices (a lot like Millard Sheets' protege, Milfor Zormes).  He even worked for Douglas AIrcraft duringWWII, according to this biography (which is followed by a list of his work),  and taught at the Otis Art Institute from the 1950s on.

Thanks for sharing the interesting background info on the fabrication and symbolism of the Federal Building mosaics.

Here's an additional detail that will perhaps change the way you look at them (it has me): Vietnam War protester Florence Beaumont immolated herself in front of one of the mosaics in 1967--you can see the branch pattern of "Celebration of Our Homeland" at the lower right in the L.A. Times photo at the link below.

Kim, that is amazing--thank you for that link.
I vaguely remember reading about monks in VietNam immolating themselves in protest, but not about such a gruesome death here. It's clearly right in front of the mosaics and the entrance on Los ANgeles street--and strangely, you get a much better impression of the size of the mosaics in that photo.