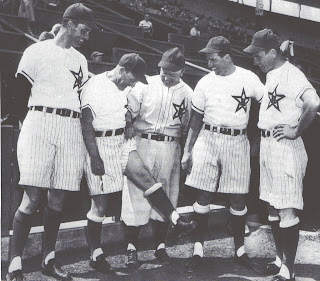 The joke was that the players were dressed in Tshirts and flannel pinstriped shorts with turned-down hose.

Manager, Fred Haney (shudda been Hanes, huh?)  insisted this was no prank, but that the baseballers expected to have more speed and energy while playing unencumbered by heavy uniforms. "These scanties provide much greater freedom of movement in fielding and throwing."

In 1940, the Los Angeles Times included a list of standard April Fools pranks: "soapy sandwches, wax apples for the teacher, and the stand-bys of 'your shoestring's untied,' and 'There's a bug on your neck.'" How quaint. Apparently the LAFD and LAPD were called out for bogus fires and murders, too.

In 1980, the Times ran a retrospective pranks pulled at Caltech, "the thinking man's Animal House." Such as: the 1975 McDonald's sweepstake stunt, wherein 26 students used a computer (this is '75, remember) to enter themselves in a McDonald's contest 1.2 million times, and won nearly $10,000 in prizes--including a car. Burger King contributed $3000 to a scholarship named for the prank mastermind, John Denker.

But was that on April Fools Day?
Posted by Vickey Kall at 10:08 PM