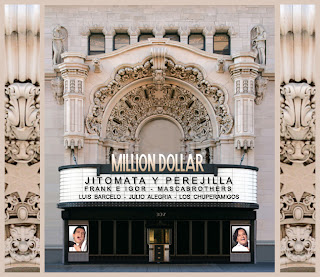 Sidney Patrick Grauman loved nothing better than to put on a show. When ticket-buying patrons came to one of his theaters, they got more than just a night out. They experienced an event. In 1918, he opened his first Los Angeles venue, the Million Dollar Theater, at Third and Broadway—an opulent Spanish Baroque-style building filled with murals, statues and word carvings.  Grauman had no problem filling the 2,345 seats.  His problem concerned the potential movie goers he turned away each night.

As a result of his success, he opened two more lavish theaters in downtown Los Angeles, the New Rialto and the Metropolitan. The latter’s lobby boasted a sphinx with the head of George Washington and an inscription that read: "You cannot speak to us, O George Washington, but you can speak to God   Ask him to make us good citizens.” 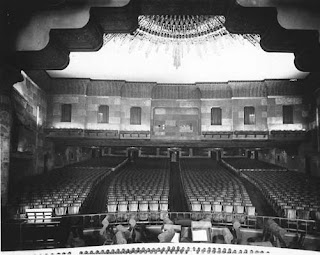 No doubt, Grauman would be asked to have such an atrocity removed from the premises today, but back then people found it amusing.

When Grauman built his fourth theater, he moved outside of the city limits to Hollywood.  On Hollywood Boulevard at McCadden Place he oversaw the construction of the impressive Egyptian Theater.  Unlike his other establishments, this one boasted a forecourt with shops safeguarded by elephant statues in royal garb. Grauman even paid an employee to dress like an ancient Egyptian soldier and march along the roof announcing show times. 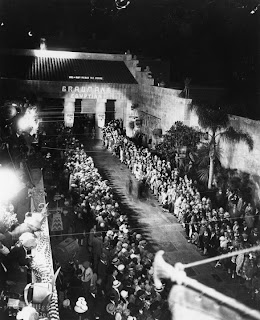 To enter the building, patrons passed through oversized columns that stood 20 feet tall by four and half feet wide. Once inside the lobby, they found themselves in another world. Surrounded by Egyptian figures, a Sphinx and sarcophagi, visitors examined the hieroglyphic-like writing on the walls. A large, golden sunburst hovered over the movie screen, which only enhanced the mystical ambiance. Cleopatra would have been proud.

featuring everyone’s favorite swashbuckler, Douglas Fairbanks. Thousands of movie fans lined the streets hoping to see their favorite stars. Searchlights lit up the sky and a red carpet was unfurled to welcome the filmmaking elite dressed in their finest. That evening, Sid Grauman flawlessly delivered the razzle dazzle and set the bar for future Hollywood premiers. 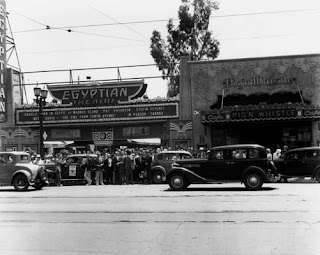 (All of the black and white pictures are from the Los Angeles Public Library's online photo collection. The one above left is from 1922, reproduced for the library by Marc Wanamaker. The crowd is waiting for the arrival of Pickford and Fairbanks--Vix)

Just five years later another Hollywood landmark opened next door—The Pig ‘N Whistle. The tidy little restaurant featured a dining area, soda fountain, candy counter and decorative wall tiles that depicted a quirky flute-playing pig. Taking advantage of its location, the place even had a side door that opened directly into the Egyptian Theater’s forecourt. Customers found it convenient to have dinner and then see a movie right after or stop by for a snack after the show. During its heyday, the popular Pig ‘N Whistle hosted many Hollywood greats from Spencer Tracy to Shirley Temple. 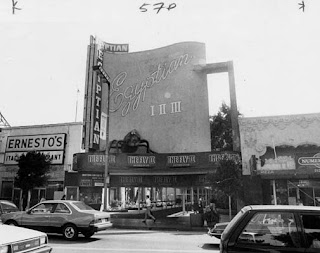 Unfortunately, both burgeoning businesses fell victim to hard times and eventually closed. The buildings themselves fell to ruin. During the last fifteen years, however, multi-million dollar renovations occurred and both the Egyptian and The Pig ‘N Whistle are once again open to the public. So if you are in the area visiting Grauman’s most famous of theaters, The Chinese, take a stroll down the block and have a bite at The Pig ‘N Whistle before you drop in to see the Egyptian.

(Photo at left is from 1989, when the Pig 'N Whistle was a Numero Uno pizza place. Color photo shows the restoration of the sunburst over the movie screen, from the Eqyptian Theater's website.)

Thanks so much, Deb!  Debra Ann Pawlak's new book, Bringing Up Oscar: The Story of the Men and Women Who Founded the Academy, will be out next month, and can be pre-ordered on Amazon by following the link on the title. You can also follow her Hollywood: Tales from Tinseltown  Facebook page and read updates on early Hollywood trivia and gossip.

Thank you so much for your kind words!

This is a good blog. Keep up all the work. I too love blogging and expressing my opinions

Nice style. I would love to write that way.
Tapety na pulpit
[url=http://darmowetapety24.blogspot.com]Tapety[/url]

This is very inspiring work you have created for us. Some people need to know that these things can ensue to anyone. You have shown me a better view now.

Resources like the one you mentioned here will be very useful to me! I will post a link to this page on my blog. I am sure my visitors will find that very useful.

Can I clone your article to my blog? Thank you…

Anonymous, I'm not sure what you mean by cloning the post to your blog, but as you're anonymous and I don't have the name of your blog, I can't answer that. Please feel free to write me or post again with details.