The Harbor Gateway is the newish name for what used to be called the LA City strip: the strip of land connecting the city to its harbor in San Pedro.

And what does this picture have to do with that? Well, this 1908 shot (from the Los Angeles Library's photo collection) shows speedsters awaiting the starting gun at the original Ascot Park, one of the notable showplaces in that strip. Most of the drivers are identified; that's Ralph Hamlin in the Franklin Model H with "Greyhound" printed on the hood. Ascot Park hosted horse races and boxing bouts too.

Basically, the strip runs between Vermont and Figueroa, separating Gardena from Compton, then jumps a few blocks west to run between Western and Normandie, separating Torrance from Carson. The Los Angeles Times "Mapping LA" project shows it here. Or, if you don't mind waiting for the full-color pdf, try this one from the City Planning Commission.

The section between Del Amo and Torrance Blvds. has its own separate history highlighted by gang violence; the Times' Sam Quinones wrote a first-page feature on the area March 4, 2007, with a lot of the history. Before World War 2, the place was mostly empty fields. Folks who lived there (Quinones gives the whole ethnic breakdown of which groups moved in when) knew and accepted that their cheap real estate meant they were left out of many city services and had to wait longer for police and fire response. Things have improved--because the gang violence grew so bad that the media and mayor got involved a couple of years ago.

But why is that strip of land there in the first place? Well, everyone knows it's so Los Angeles will always have a clear right-of-way to the harbor, right? Like most "everyone knows" items, this was hard to track down.

I learned that "By 1906, the city's access to the sea had been legally assured by annexation of a strip of land about 20 miles long and a quarter mile wide. This passageway came to be know as "the shoestring corridor"." Aha! Another phrase to google!

With few results. This military history site gives 1909 as the date that the Shoestring Corridor was annexed, mixing it in with the year when Wilmington and San Pedro became part of Los Angeles. A minor misstatement. I'll have to return to that site someday, which describes how naval submarines were stationed on our coast in the early 1900s.

From one article in the Times that referred to the "Shoestring Strip," I did learn that in 1910, the Pacific Electric car took folks from Los Angeles to San Pedro--a distance of 22 miles--in 45 minutes. Nice bit of trivia. In that article, the Shoestring Strip was defined as being 11 miles long, and the recent annexation of San Pedro and Wilmington added 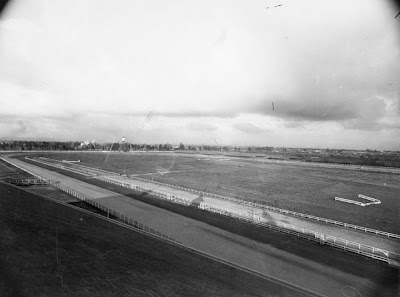 Proquest (the only way to get at those old LA Times stories) responded to the term "Shoestring Strip" though. Which leads back to Ascot Park. The Shoestring Strip was annexed in 1906--by vote, on November 12 of that year. The city of Los Angeles population voted overwhelmingly in favor of annexation, but it was the approval of the "country district"--the actual inhabitants of the strip, many of them ranchers--that was really necessary. In one district (Green Meadows, which was mostly in the strip) the measure was approved by only ten votes: 213 to 203. Those votes were recounted several times, because the seal had been broken.

All sorts of reports of irregularities surfaced. The word had gotten out that if annexation passed, Ascot Park would close. No more horse racing...no more betting! Gamblers and employees of Ascot Park suddenly showed up to vote, swearing that they lived in the strip. In spite of that, the vote was to annex the strip. Los Angeles was now a seaport!

Ascot Park protested. They filed papers asking the Secretary of State of California to not validate the election. Why? Because once part of the city of Los Angeles, Ascot Park could not have races and betting. A compromise was reached in December 1906 allowing the horse racing (and the betting) to continue through the season, so the track dropped their suit.

I'm sure that's not the end of the story but it will do for now.

Email ThisBlogThis!Share to TwitterShare to FacebookShare to Pinterest
Labels: neighborhood

How interesting. I started doing research on Harbor Gateway this March, and just ran into your blog that focuses on the Ascot Race way. In my notes, I have that the lease expired in 1990, so the land was sold to developers who made commercial buildings and a parking lot out of it. Anyway, I agree that finding information on this city is a doozy. I found most of the early history in the journal of Economic Geography (JSTOR).

Thank you for the tip about the Journal of Economic Geography.
Since posting this, I've learned that the Ascot Raceway that figured in 1908 was located at Central and Slauson! It had been built only a few years before, outside the city limits so that gambling could take place. Mostly for horse racing, it had stables, etc. Not sure when that Ascot was torn down.

First off, the original Ascot Park was located in El Sereno and it wasn't until later on that the J.C. Agajanian owned Ascot made it appearance, whether it was replacing a older horse racing track. Well, I'm researching further.

The original Ascot Park--or at least, the one around in the early 1900s that had horse racing--was much further north than the Agajanian track of later years. I'm pretty certain about the Central and Slauson location--a location that no one would call the Harbor Gateway today, but back in 1906, it was just outside of the city limits and included in the shoestring corridor.

Hello everyone,
I am a Masters in Urban Design student from U.C.L. university (London). This year we are doing a project in Los Angeles and I choose your area, Harbor Gateway as my site, because i can see that it is an interesting area to explore.
For me it is so interesting why is this area there and the limit between Los Angeles and Carson , Torrence, and the other areas. Do you have any difference in terms of law, policeman, political, economics with this areas that they not belong to Los Angeles? Do you have any advantages or disadvantages because you belong to L.A.?
It will be really interesting for me and my project if you could tell me this and also the problems that you have in this area that it is so unique because it is a strip. Why is there and not in other part? historical reasons?
I tried to find this kind of information in internet but I am not successfully. If you could help me it would be great, with some information and maybe with some contacts or websites.
I just read taht some Evelyn was doing a research in this area, if you could help me it would be great. It is not so easy to find anything.
Thanks so so much!!
I hanls looking forward to hearing from you!!
Ana

Vix,
Why so rude. Isn't the purpose of this blog to share information? Your last remark comes off as haughty and mean

Paloma, I am rightfully chastised. I reread Ana's comment several times. My initial reaction was that someone was just kidding around, but I could be wrong and that was no reason to be rude. The questions, which I initially thought were vague, are actually not--though they would be difficult to answer.
The poster (Ana) left no contact information so I'm still not convinced that she really wanted a dialogue. However, I apologize for my negative, nasty cracks and have deleted them.

It is my first time here. I just wanted to say hi!

I admire your web page , it has of lot of information. You just got a perennial visitor of this site.

Useful information shared..Iam very happy to read this article..thanks for giving us nice info.Fantastic walk-through. I appreciate this post.

I just added this blog to my feed reader, great stuff. Can't get enough!

I'm delighted to see this. I grew up in what we called the Shoestring Strip, on 215th Street, which meant we went to Los Angeles schools, but if we wanted to go to the post office we would walk over to the one in Torrance. (It was a little bit like being stepchildren, but at the time it was a wonderfully safe-feeling working class neighborhood.) In the late 1940s, when we moved there, Western Avenue was a dirt road, and on the rare occasions when it rained we would go splash around in its mud puddles. There were a couple of sloughs (pronounced "slews") nearby that we'd also play in, looking for frogs -- sloughs on which more housing was later built. Wonder if those houses ever had problems with water leaking in....

Pat, we were on 215 St as well--the 1600 block! Small world. And I did go to Torrance schools, although friends on the same block went to LA city schools.