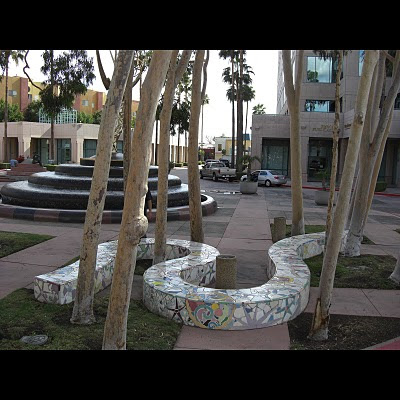 More mosaic art by Marlo Bartels--this is Emmy Plaza, outside the Academy of Television Arts and Sciences on Lankershim Blvd in North Hollywood.

The Emmy folks have been here since 1991. Jan Scott, production designer and winner of 11 Emmys herself, is given credit for the grand design of Emmy Plaza, which features a fountain and 27-foot-tall statue of the Emmy Award (hidden by trees in this photo, from Marlo Bartels' blog).

Interestingly, the 1991 Los Angeles Times piece about the TV Academy's opening says it's an 18 foot statue. Maybe it is and the fountain that serves as a pedestal adds another 7 feet? 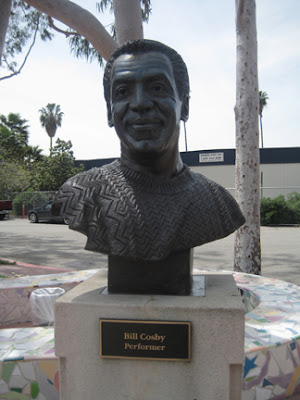 But none of that has aught to do with Marlo Bartel's work.

I wasn't able to find any pictures of the cubes, but they are of cracked tile like the meandering long benches that twine between eucalyptus trees.

In the Hall of Fame section of the plaza, busts and statues of iconic TV stars dot the plaza as well. Here's one of Bill Cosby that shows the mosaic bench right next to it. 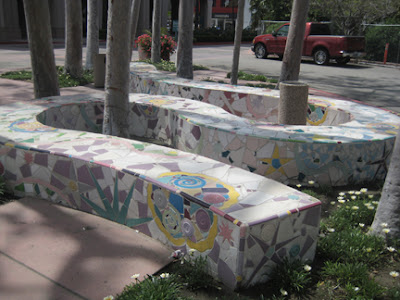 This last photo and the one above are from the Public Art in LA website, a great source for photos of the individual star bronzes. Those are worth looking at--there's Dinah Shore, Red Skelton, Jackie Gleason, Lucy & Desi, Mary Tyler Moore & Dick van Dyke, Tim Conway, Walt Disney, Johnny Carson, Walter Cronkite, and many more.

The Academy has a detailed and complex history outlined on its site, which only makes me grateful that this post is about the mosaics outside, and not the politics within.