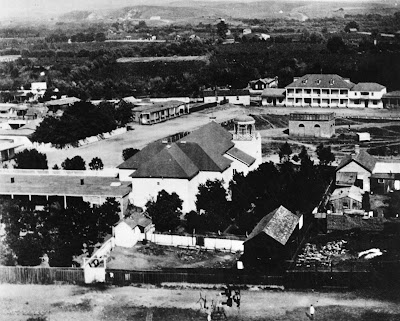 This is one of the earliest dated photo I could find of Los Angeles at the public library site. It's circa 1869, and shows the Plaza from a hill.

Julian Chavez--for whom Chavez Ravine is named--was elected to Los Angeles' City Council on July 3, 1850, and resigned only 8 weeks later. I don't know why. Fifteen years later, he was elected to the City Council and served for a year on several committees. He continued in public service into the 1870s.

He's one of over 40,000 individuals who have been elected or appointed to work for our city over the past 162 years.

That's the kind of information you can find out on the City Officials Historical Database, now online. Dates of elections, what kinds of committees we had back then--boring to some, invaluable to others.

If you like this kind of research, check out the Database's Reference page, which has links to all sorts of sites. This Introduction Section and a User Page explains how to use the database. Compiling lists of all the city's office holders started in the 1930s, under the New Deal.

Weird to imagine that such records didn't formally exist before then. Did we simply rely on memory? Private grants allowed this project to go online.

Guess where I was for the last week? Two hints: Touring the nation's capital on a Segway is tremendous fun. Being caught in a storm while on a sightseeing boat in the Potomac at night is not.

Email ThisBlogThis!Share to TwitterShare to FacebookShare to Pinterest
Labels: government

Great stuff! Here's another photo of the plaza reportedly taken the same year:

Wow--thank you. For those interested, the picture at Wattway.org shows the front of the church and is from a much closer perspective.
Very hard to get my mind around the changes in this place over 100 years.

Glad you like the database. I was one of the people who updated the inventory from 1965 to the present. The 1930s first collection was done by the Library Department and was drawn from Council Minutes.
I used Minutes, annual reports and other resources to bring the history up to date and will be doing so as time goes on.

Thank you for all your painstaking work!