Old folks--truly old folks--remember the ethnic celebrations in Long Beach, the most famous being the Iowa picnics. Yup, Iowans, alone and isolated on the westernmost fringes of civilization, strangers in a strange land, used to gather to celebrate their heritage. They still do, in fact. Back then, the picnics were usually in Bixby Park; today--well, twelve days ago--the venue for the 110th Annual Iowa State Picnic was the Long Beach Lawn Bowling Club.

But these weren't just Long Beach events. The first Iowa picnic was in 1900 in Pasadena. That first picnic took placein January, perhaps to drum home the point that in California, you could picnic in January. This undated picture, from the Los Angeles Public Library collection, shows a gathering in Highland Park. My guess is that it's the early to mid 1920s. And I don't think it's summertime. 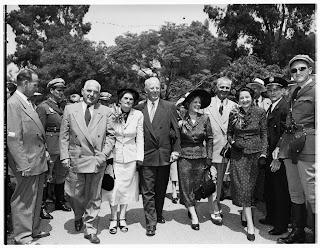 However, Long Beach is the place most associated with the Iowa picnics. There were so many Iowans (and other midwesterners) in Long Beach that the town was dubbed "Iowa by the Sea."  By 1908, the biggest picnics were located in Long Beach, often at Bixby Park. In 1928, future president Herbert Hoover (a native of Iowa) spoke at the picnic. An article in the Los Angeles Times in the 1940s estamated the picnic crowd at 100,000. To facilitate meetings between old friends, tables were set up with the names of Iowan counties. The picture to the right was taken August 11, 1951. In spite of the heat, folks dressed to the nines. (The photo comes from USC's Digital Archives; I think it was first published in the Examiner. And Governor Earl Warren--soon to be a Supreme Court Chief Justice-- is right in the middle, along with the governor of Iowa. These picnics were important.)

"The Iowa Picnics: The Shift of Midwestern Ethnicity in 20th-Century Los Angeles"...doesn't that sound like a perfect thesis title?

Iowa picnics, which may have started out as just social get-togethers, grew and grew over the generations, becoming so big that in fifty years, governors were attending. As they were growing, the US was changing, through wars, racial mixing, the end of segregation, and the civil rights struggle. Yes, I think there's tons of material for a PhD thesis there; wouldn't be a bit surprised to hear of one. 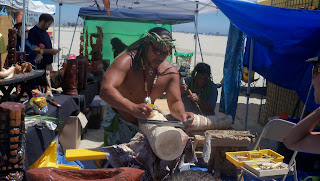 What sent me off in search of Iowa State Picnic photos? My own humble shot, taken at the 7th Annual Long Beach Tiki Festival on August 21st. The Tiki Festival is a celebration of South Pacific culture--shaved ice, ukulele music, and kitchy art. Great fun on the beach. These gentlemen in ti-leaf sun visors, were carving tiki figures. I originally saw this as a version of the Iowa picnic.

A 2006 article in the Long Beach Business Journal  pointed out that between 1973 and 1989, the big influx of immgrants were from either Mexico and Central America, or the Pacific Islands like Samoa.  In 2000, 13.1% of Long Beach residents were of Asian or Paciific Islaner descent.

I carry the perceptions of my own age cohort--the boomers--and have always thought of Long Beach as a town full of Filipinos, Cambodians, and South Pacific Islanders. And Iowans, as I now know.