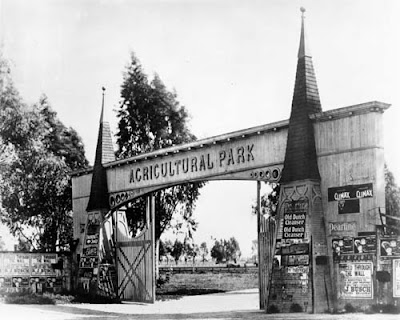 This picture (from lapl.org's photo collection) is undated, but it had to be taken before 1913, maybe several years before. The Agricultural Park had been around since 1876.

In 1909, plans were nearly complete for the building of the Natural History Museum (only then it was the Museum of History, Science, and Art) and a state armory. Bids were solicited. The next year, the site changed its name from Agricultural to Exposition park.

The old Agricultural Park had a racetrack for cars that was moved during the construction so that the sunken rose garden with a central fountain could be planted between the two buildings--the museum and armory. Long range plans, even in 1909, called for a memorial statue at the fountain to celebrate the bringing of water to Los Angeles from the Owens River.
Posted by Vickey Kall at 5:42 PM