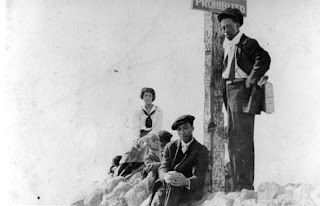 Adrian Shields says that when he was a kid in the late 1930s, he used to swim at the Ink Well in Santa Monica. On some nights, he could just barely make out the lights of Tony Cornero's gambling ship, the Rex, anchored three miles from the beach. According to Adrian, the older kids would dare each other to swim out to the Rex and try to sneak aboard. None of them ever managed this feat--the Rex had bouncers and they shooed the swimmers away.

From the 1920s to the 1950s, the Santa Monica beaches were segregated. In fact, so were most Southern California beaches. The Ink Well, around the western ends of Bay Street and Pico Blvd, was roped off, and was the only place were African Americans were allowed to swim and play. By the 1940s, some were surfing as well.

The City of Santa Monica has published their proposed language for a bronze plaque that will acknowlegde the 200-ft. strip of beach called the Ink Well, and gives a bit of history about Nicolas Gabaldon, Jr.--the first African American surfer, who graduated from Santa Monica HS and learned to surf at the Ink Well.

Nicolas was killed at Malibu Beach in 1951, when he hit a pier piling while riding swells of up to ten feet. I found two accounts online about his short life: at BlackAthlete.com and LegendarySurfers.com. BlackSurfing.com had a short piece, with this picture of Nick.

It is always refreshing to see the history of Ink Well Beach and Nick Gabaldon being spread. Thank you so much for getting the word out thee through your blog. It was a big feat in my life and I hope it inspires you in the future. The dedication for the plaque is coming up. Please contact my office if you would like more information.

p.s. thanks for mentioning my articles :)

I enjoyed reading your entry re: Nick Gabaldon and Ink Well beach. Very educational. This past Spring, I wrote a song about Nick, so inspired I was by his story. It's called "Soul Surfer: The Ballad Of Nick Gabaldon." If you're interested, you can hear the mp3 at my website http://www.sabrinamessenger.com

Looking for more information on the Inkwell - was this area chosen because it was down the block from Phillips Chapel, Christian Methodist Episcopal Church - Santa Monica's first black congregation?

**
Neither genius, fame, nor love show the greatness of the soul. Only kindness
can do that. - Jean Baptiste Henri Lacordaire

Hey, is it OK if I re-post this to my blog?
I will give you credit, of course!
Here is my page : (source)