Today's mosaic is actually a whole series of mosaics on view since 1969 at the Norwalk Public Library on Imperial. This first picture comes from the children's section of the library. There are actually 21 pictures on this disk: 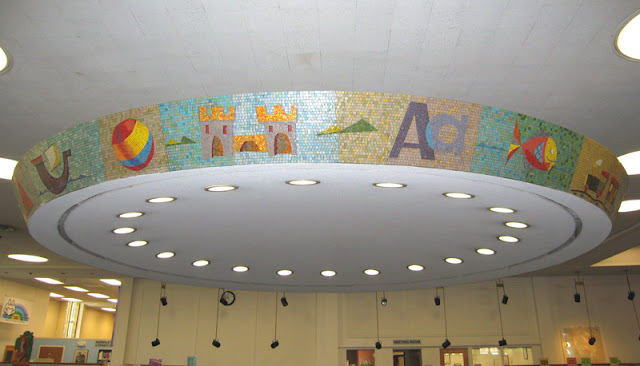 The second picture is one of two mosaics that flank the main entrance to the library. Both show California history...actually, they show how perception has influenced history. 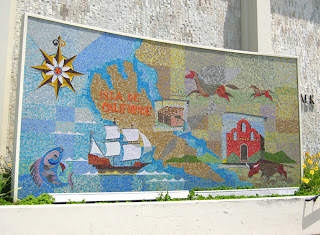 The mosaics are based on old maps, and as you can see on the first one, California was once believed to be an island. The sailing ship, fish, horses, and mission reflect our story up through the mid-19th century.  The other mosaic (below) reflects California's statehood days, with trains, planes, ships, oil fields, and a rocket.  Both are 10 feet high and almost 20 feet long. If you click, the larger picture shows much more detail.

The artist, Ben Mayer, came to Los Angeles in 1949 from Germany, via England, and he lived here for fifty years, till his death at the very end of 1999. 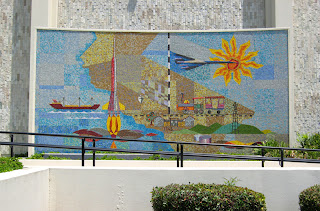 He had his own design firm, creating artwork for commercial buildings--big buildings, like theaters and casinos. His obituary in the Los Angeles Times says the successful business allowed him to pursue his hobbies--photography, hunting, water skiing and more, all over the world. (He spoke five languages.)

But his favorite hobby was astronomy, and eventually he turned over the design business to his son Quinn and blasted off...sorta.

Ben Mayer was the first person to photograph a nova from beginning to end (all 36 hours) and capture on color film all 108 of the Messier galactic objects. He globe-trotted to photograph 13 total eclipses as well, and he wrote  four books on astronomy.
Not only that---he actually invented and patented astronomical devices that are widely used by scientists.

Geez Louise. I think I deserve a medal if I can post to my blog, walk the dog, and download some pictures all on the same day.  And I say that knowing I'm just getting this Mosaic Monday post in under the wire.