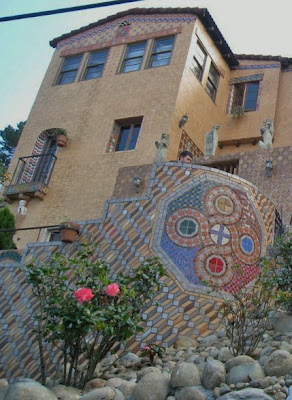 "I never bought a tile," says Geogr Ehling.  No, in the 44 years he's been working on his house (46 now), he has used tiles that he found in dumpsters and garbage bins outside of tile import businesses, and he's covered his whole house in them.

At least, that's what he claims  in this YouTube video---one of many videos on the mosaic house he's been working on since he moved in, in 1967. And who would argue with him?

He cut the tile himself and used every bit of it. Every teeny tiny bit, and some of the sections he designed are intricate and delicate, while others are very bold. Some are modern, others imitative of ancient art.

George was a stuntman in what he calls the "Hollywood on the Tiber" days--he was in Barrabas, The Barbarians, and more. He also lived in Europe for years--he was a pro wrestler there in the 1930s--where he saw lots of Roman and modern mosaics and picked up a few techniques. But mostly, it sounds like he improvised. And by now he could probably give lessons.

The mosaics--which cover every inch of the 1927 house--are enhanced by bits of statuary and molds that George picked up from the studios. Lion's heads, for example,  and cherubs and bearded men. 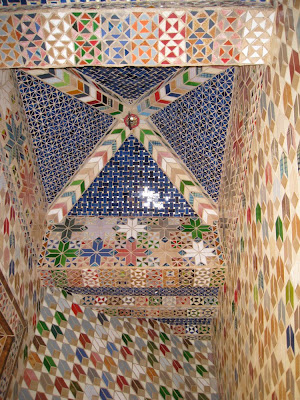 George's place is a private home, but he sometimes opens it to tours. This Patch article from 2012 describes one of 35 people, each paying $5 to walk through the home--including, I assume, the private bathroom that Harrison Ford, then a carpenter, helped him build.

That's the bathroom ceiling at right. Although the same shot is in the video above, I "borrow" this picture from the California Home Design website, which did an article on George and his masterwork two years ago.

For a little more personal information on George, his wife, and their musician son Otto, check the Here in the Hills blog.

An amazing point about the house--other than the sheer volume of work entailed in it--is the variety of patterns George has incorporated. Quilters will recognize some of those to the right, but there are also basket-weave type designs that don't show up until you get really close. There are optical illusions, rose-window-like medallions, and meander patters, as well as river rock mosaics. And there are some very classical Roman style pictures too, which you can see at the end of an earlier Here in the Hills post.

And this last picture is from that blog, which you should visit because the blogger has close up shots of may of these sections, so that you can see the workmanship involved. 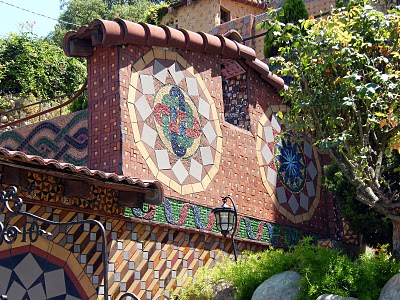 Informative article, just what I was looking for.

It's always a pleasure to read good articles like this one.
Hollywood Hills Property
Homes for Sale in Holmby Hills Ca