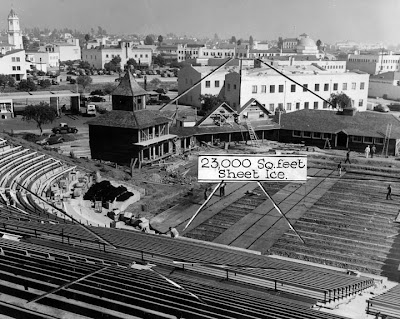 An ice rink was built on the southwest corner of Gayley and Weyburn in Westwood. According to the Polar Palace website, that's Gayley on the left, with the car driving down it. This picture, found at the LA City Library online archive, is dated November 7, 1938.

The arena was called the Tropical Ice Garden, and it opened in November 1938 as the world's first year-round outdoor ice skating rink.

If the location is correct, the Ice Garden sat across from O'Hara's, where the brick building housing the Coffee Bean and Tea Leaf is now. Of course, it was much bigger (it held 12,000 people) so it probably took up a few of today's blocks. 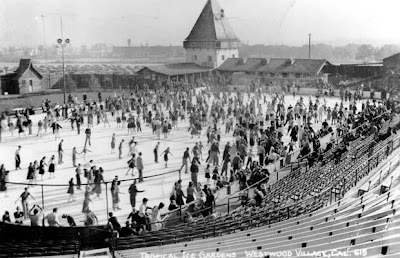 The Tropical Ice Garden did quite well, apparently, and was a big hit. The Polar Palace/Squareone site quotes the Los Angeles Times description of the St. Moritz Express show, an extravaganza that was accompanied by Ted Fio Rito and his orchestra, engaged for the run of the show.

By 1949 it was the Sonja Henie Ice Palace, but was torn down to accommodate a UCLA expansion. Since a Coffee Bean sits there now, it's hard to imagine what expansion demanded the sacrifice of the big arena.

Those are cool photos! Do you know where they came from?

I have been in Westwood many, many times over the years (I graduated from UCLA In the mid 70's) and I had never heard of this ice skating rink. Cool picture!