It's a dirty little secret that my family would like to deny: I bowled for years. I was on a league. Several leagues. Although I don't think I ever played at the Shatto 39 Lanes shown glammed up a bit at right, I did go to Vegas and Reno for bowling extravanzas back in the 90s.

Somewhere, I may still have the bag and pretty white shoes, as well as what we affectionately called "the Pepto-Bismol ball."

Red, pink, and swirly--get it? 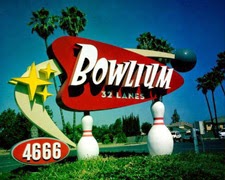 So the new BOWLARAMA exhibit at the Architecture and Design Museum is right up my alley.

You saw that coming, right? I won't even bother to apologize; it wouldn't be sincere.

Los Angeles Magazine posted a slide show celebrating the exhibit, which makes sense because it is curated by Chris Nichols, one of their editors and my favorite columnist.

This picture at left is of the Bowlium in Montclair, which is almost LA county. I don't know how old it is but it's almost as cool and Googie as my ultimate favorite, the old Bowl-O-Drove.

And yes, it's very sad that my beloved Bowl-O-Drome in Torrance does not seem to be included in the A & D show, which opened Saturday April 11th and runs through May 11th. The bowling alley is still there, as it has been since at least the 1950s, and it's kept its great name. But the owners got rid of the retro look about twenty years ago.

Why? Even twenty years ago, I think that 50s nostalgia appearance could have paid off if marketed correctly. But, sadly, bowling alleys have never been known for their savvy marketing.

All I could find was this matchbook cover, which sold on eBay for $3.99.

Man, all those decades and no picture of the facade exists? Someone's got to have one!

I once had a tee shirt with this green and gold logo on it, but it's long gone as well.

Anyway, the museum exhibit is focused on the 1950s and the "architecture and technology that created a new kind of space-age recreation center and reinvented the sport of bowling in the 1950s." 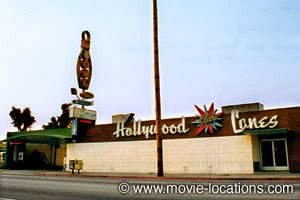 Many of those 50s-era lanes are gone, like the Missile Bowl in Gardena and the one on Imperial in El Segundo where all the airline employees used to go at all hours--there was even a 3 am league for those who worked the graveyard shift.

The alley where The Big Lebowski filmed--the Hollywood Star Lanes--was demolished in 2002. This photo is from Movie-Locations.com.

Love this,Vickey! My father-in-law was a pin setter back in the day when they did it by hand. I think it was his first paying job as a kid.