It's a little late for Halloween, but the Witches House in Beverly Hills is full of mosaics!
Mostly cracked tile mosaics, from the pool outside to the bathrooms and even the wall behind the owner, who is featured in this Channel 7 ABC video: 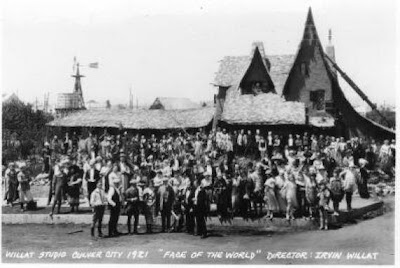 Between the Seeing Stars site and Wikipedia, I've learned this: The house was built in Culver City in 1921 by a studio art director, Harry Oliver, and in fact was used for several silent films before being moved to Beverly Hills in 1934. (Oliver designed the Tam O'Shanter in LA.)

The house served as a funky office building and dressing rooms for Irving Willat's film company--the black and white picture is from that period, 1921. I think the "Face of the World" must be a movie title, though I sure don't see it on imdb. 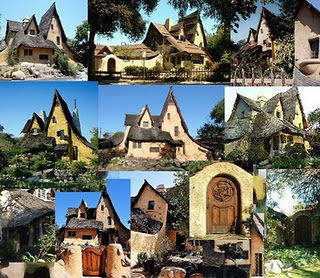 The Spadena family bought the house and moved it Beverly Hills, so the house is often called The Spadena House. You can see it in the background of the movie Clueless.

The current owner of the Witch House, Michael Libow (he's in the video) bought it in 1998 and has lovingly restored and revamped it. Wiki says that Libow was the selling agent in 1997 and bought it himself when every other potential buyer made clear their desire to tear it down. Libow has worked with a movie art director, Nelson Coates, to create a fantasy home, and mosaics are part of that. 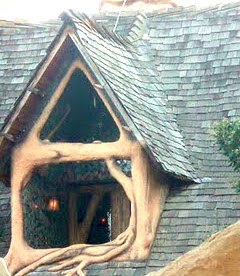 A wonderfully quirky blog--Midnight in the Garden of Evil-- has tons of exterior pictures, because Libow hosted a political fundraiser there once. But no shots of the interior, sadly. One of Midnight's shots hints at the mosaics, though, and I played with the contrast to bring them out a bit. The result is to the right.

But to see the whimsical tree-like mosaics in the bathroom, you'll have to watch the video above.

Excellent site, keep up the good work, my colleagues would love this. I read plenty of blogs every day, and for the most part the authors lack substance, but not in this case. I just wanted to make a short comment to say I’m glad I found your blog, I'm gonna bookmark this historylosangeles.blogspot.com web site. Thanks

I watched the movie The Undead 1957 and I saw the Spadena House, is a great movie and the history too.The Spadena House not was completely reformed house because now where is that chimneypot on the roof? I have a photo in the magazine of architecture in 1989here in Brasil and show two chimneypot.But in general is a great old house and very beautiful.bye!Carlos faria
c.faria2011@hotmail.com

just dropping by to say hi

simply dropping by to say hey