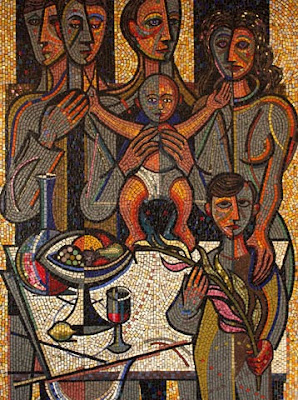 Today's mosaic by Joseph Young stands in  the lobby of Temple Emanuel in Beverly Hills, on Burton Way.

Young's mosaic, along with other artwork for the temple, was commissioned by Sidney Eisenshtat, the original architect. It was Eisenshtat's first major design, but it was followed by many more, like the Friar's Club and Temple Sinai. Eisenshtat lived to be 90, and passed away in 2005. Here's a link to his obituary in the Los Angeles Times, which lists many of his works.

Temple Emanuel opened in 1953 without the mosaic (it came along in 1955) and was refurbished lately by Rios Clementi Hale Studios. Here's a great article in the Los Angeles Times Magazine about the renovation and its deeper meaning.

The Times online piece includes a pictorial of old and new pictures of the temple, showing the black and white 1950's and 1960's photos alongside shots of the renovated site. I borrowed this picture of the mosaic from them, but to see the whole enchilada, go here.

The photo below, showing the entire mosaic, came from the Joseph L. Young Facebook fan page. The temple has a Facebook page too. 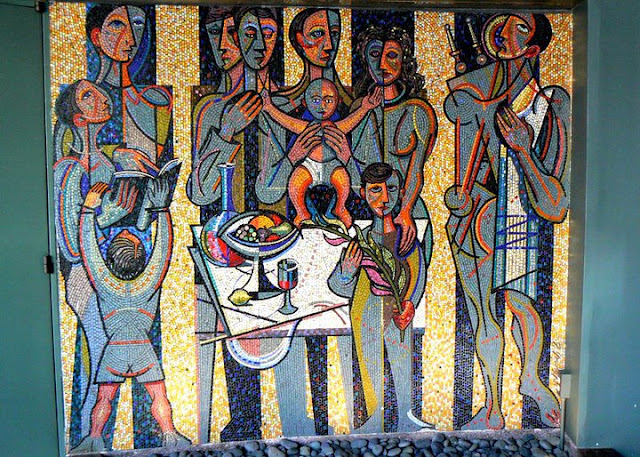 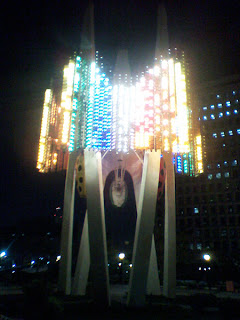 The LA Is My Beat Blog posted a wonderful 1955 newspaper photo of Young working on the mosaic, here.

There's actually a reason that I feature more of Joseph Young's work today as opposed to, say, a month hence. I have blogged about him before--his UCLA History of Mathematics mosaic, for example. . . I'm too lazy to go searching for them. Just put "Joseph Young" into the search box if you're interested.

Today is the 36th anniversary of the installation of the Triforium in Los Angeles, in the Civic Center area at Temple and Main. I learned that by becoming a fan of the Joseph L. Young Facebook page.

So it seems appropriate to feature a mosaic by Young, the Triforium's creator. This picture of the Triforium in 2011 is from Wikipedia, as is the link.

Thank you for this previous article. Yesterday was the 37th anniversary of the Los Angeles Triforium.... still ahead of its time.

The lobby housing Temple Emanuel's mosaic by my late father, Joseph Young, was renovated last year and shows the mural off to its full beauty. Photos of it were in the Los Angeles Times Magazine last year.