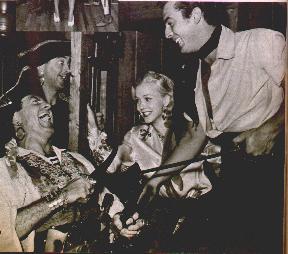 On May 3, 1940, a celebrity-owned restaurant opened up at 335 N. La Brea, right where the Bob Hope Health Center is today. And guess what? Hope was one of the owners of the Pirates Den.

Other owners, according to the book Out With the Stars: Hollywood Nightlife in the Golden Era

This picture is from the Victor Mature website and shows Mature with date Carol Landis. Mature was working on a Hal Roach picture, Captain Caution, in September 1940, and apparently brought the whole gang over to seize control of the Pirates Den. In a fun way.

On any night, though, the waiters dressed as pirates and their manager carried a bullwhip to enforce discipline in his crew.

Mock battles were staged and female patrons abducted & held in the brig until they screamed--at which point, they were released with a scream diploma.

The bar, btw, was called the Skull and Bones Bar.

So it seems that restaurant in Orange County is not quite so original, eh?


In fact, the Victualling Blog credits Don Dickerman, a pirate fanatic, with opening Pirates Dens in NYC, Miami, and Washington DC, and with being the actual operator of the restaurant on La Brea.

Dickerman's home base was Lovell, Maine. After he hired Rudy Vallee in the 1920s as a singer in one of his many NY clubs,  Dickerman introduced Vallee to Kezar Lake in Maine. Because of that, a local newspaper wrote about the "Pirate of Kezar Lake," Dickerman--who married more than 13 times. Read more about him here.

What happened to the Pirates Den? It didn't last long, as this LA Times story describes it. In July of 1941, the Times ran a story about a woman who complained that her son had been ripped off at the Pirates Den--forced to pay $6.50 for three sandwiches and Cokes. Her complaint went to the Police Commission along with another complaint from a judge who had been charged $6 for three beers. That bad publicity made everyone think the place was a clip joint, and business took a dive.

Thanks for the additional info about the West Coast Pirates' Den. That Don Dickerman really got around, didn't he? I'm going to put a link to your post on my blog.

Thanks for the additional info about the West Coast Pirates' Den. That Don Dickerman really got around, didn't he? I'm going to link to your post.